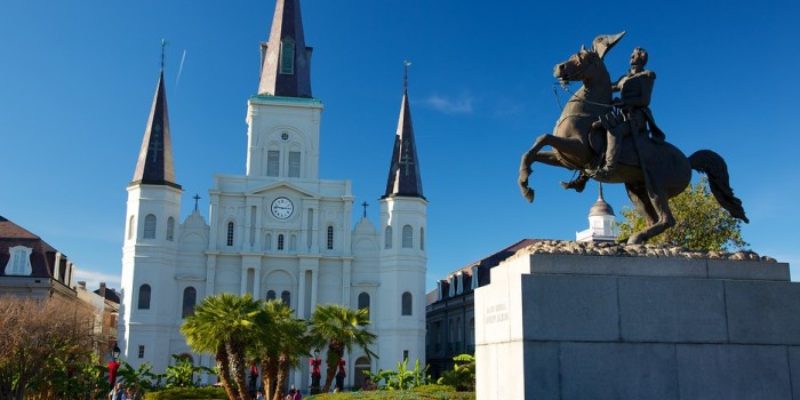 In an interview with WWL 870 AM talk show host Scoot Paisant, New Orleans mayor Mitch Landrieu reiterated that the equestrian statue of General Andrew Jackson, one of the symbols that many people associate with the city, will not be taken down.

In an interview for Meet the Press that was originally set to be broadcast on NBC but got shelved to MSNBC a few weeks ago, Landrieu had said the same, recognizing the general and future president’s role in saving the city and the country during the final days of the War of 1812.

The mayor mostly laughed off the assertion that Jackson’s monument was ever going to come down, attributing it to the anti-removal crowd’s attempt to escalate tensions in the midst of the bowdlerization of the memorials to Confederate President Jefferson Davis and Confederate Generals Robert E. Lee and PGT Beauregard.

Yet the mayor was mum on it while the Take ‘Em Down Nola Jacobins were not only demanding and chanting the displacement of the Jackson statue but engaged in a bit of street theater in a publicity stunt to take it down themselves.

Because the Cultural Marxists were reinforcing the mayor’s contention that the Confederate monuments were suddenly public nuisances through protests, public relation tirades, and wanton consequence-free vandalism, Landrieu opted to not disappoint them by stating that Andy Jackson wasn’t going. That would have turned the mob on the mayor.

The CSA statues were the appetizers for Take Em Down Nola; Jackson was always the main course.

Vilifying a former president and veteran of the American Revolution would serve as the leadoff repudiation of America’s foundation and the legitimacy of our Founding Fathers and their work (specifically the Bill of Rights- the “anachronistic” document that the forces of statism despise most).

As the leftist local media doesn’t seem to be on board with knocking Andy Jackson off his pedestal, it appears that Malcolm Suber and Co will be stymied.

The problem is Mayor Landrieu has opened a Pandora’s Box that can’t be closed by him, even if he were so inclined.

Worse yet his public engagement/humoring of Take ‘Em Down Nola gave them credibility and standing in the media.

Since this whole monument episode was manufactured by the mayor, there have been numerous acts of vandalism of lower profile Confederate monuments and even the golden statue of Joan of Arc outside the French Market.

Many people were sincerely perplexed why the Maid of Orleans was targeted though the answer is simple: most of those aligned with the Take ‘Em Down Nola agenda are cultural Marxists and anarchists. The representation of a Roman Catholic saint on public property is an affront to their militant secularism. Also she’s a European, people who have been recast by the professoriate as the earth’s leading villains.

The Obama Treasury Department has already initiated a war against Jackson by transitioning him from the $20, perhaps out of expediency after the success of the Broadway musical Hamilton made dumping the immigrant/New York Founding Father from the $10 unpalatable.

Jackson has a legacy that does not square with modern American society’s holding of past heroes to contemporary values and standards due to his battles against Native American tribes and his involvement with their displacement to distant lands. And Jackson was a slaveholder. Combined they make Jackson the lowest-hanging fruit for Leftists seeking to expand their war against once universally-revered American historical figures to create a vacuum filled by their heroes.

If the progressives continue to enjoy their near monopoly on education, media, and entertainment, it’s only a matter of time before the commotion from the Confederate monuments is replicated over Jackson, with similar results.

The exiting mayor has drawn up the blueprint for a future leftist activist mayor to bulldoze Jackson and other monuments.

The city council (save Stacy Head) and the newspapers largely gave Landrieu a free hand to do whatever he wanted to achieve his end, including the arbitrary use of city personnel, firemen, and police, concealing the details of the contractors and vendors used to perform the work, and stalling responses for public information requests from the more reasonable electronic media on civil servant overtime.

The entire monument operation lacked basic governmental transparency over exaggerated concerns for the monument removal workers’ safety while resources were redirected away from general public safety at a time when violent crime is exploding in the city. It was a justification that served Landrieu well.

Historic monuments that have stood for over one hundred years were removed because of the wishes of not the community, which by the mayor’s own admission never fully embraced the campaign, but because of the whim of a single politician who was on his way out of office.

The matter of the statues never came up in a single city election.

If all it takes is for one stubborn mayor to move a monument, then Jackson’s place in the square that bears his name is not as solid as the granite base that supports the Hero of New Orleans and the horse he rode in on.

Thanks to Democrats, history now has term limits.