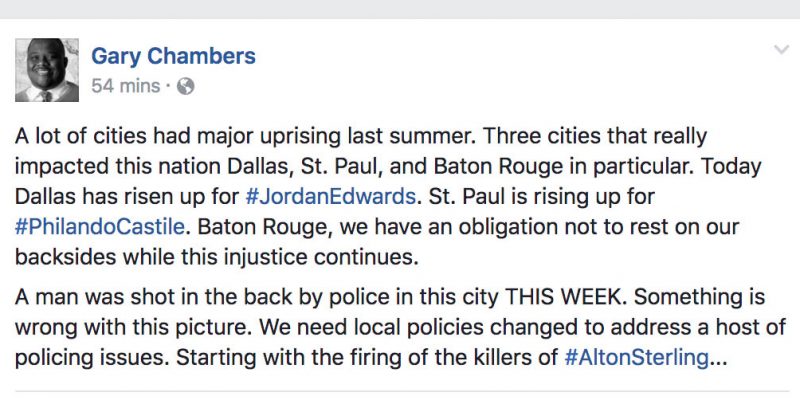 …and one wonders exactly how far he has to go before East Baton Rouge Mayor-President Sharon Weston Broome finally publicly admits that having Gary Chambers as part of her political machine was a mistake.

The man “shot in the back,” in Chambers’ narrative, was a career criminal named Jordan “Cake” Frazier, who was killed in a shooting by a Baton Rouge Police officer. That officer, Yuseff Hamadeh, has five years’ experience in law enforcement – four as an Iberville Parish Sheriff’s deputy and one with BRPD. He’s currently on administrative leave as the case is investigated. What is known, though, is that a vehicle containing Frazier as a passenger was stopped on South Acadian Thruway near the intersection of Claycut Road – which is not a bad neighborhood, though it isn’t far from one – late last Tuesday night. According to the Louisiana State Police, who are investigating the incident, Frazier exited the vehicle with a stolen gun drawn and was promptly put down by Hamadeh.

No one is contesting the need for an investigation of the shooting. Police don’t have carte blanche to unload on every suspect it strikes their fancies to shoot. But if Frazier did emerge from the car with a gun it’s not hard to see this as a justified shooting regardless of his race or that of Officer Hamadeh.

Why would Frazier alight from the vehicle brandishing a gun? If that seems like a highly unstrategic move on his part, it could have been explained by desperation given his circumstances…

The man who was killed during a traffic stop by a Baton Rouge Police officer was out on bond for a recent arrest with similar circumstances to the shooting incident, according to court documents.

Jordan Frazier, 35, was arrested on March 8, 2017 for possession with the intent to distribute MDMA. The drugs were allegedly discovered during a traffic stop that happened on the same road less than three miles away from where the shooting occurred.

According to the probable cause report from that arrest, Frazier was driving in the 1900 block of N. Acadian W. when an officer with the Baton Rouge Police Department claims to have witnessed him driving without “lights illuminating its license plate.”

The officer conducted a traffic stop and allegedly asked Frazier for permission to search the vehicle. Frazier allegedly agreed to the search and the officer claims to have recovered a pill bottle with 58 MDMA pills in it.

Frazier was arrested and booked into the East Baton Rouge Parish Prison. His bond was set at $15,000.

Officials with the prison say Frasier posted bond and was released on March 14.

Fraiser was scheduled to appear in court on June 28 for an arraignment hearing in Judge Bonnie Jackson’s courtroom.

That March arrest was likely to result in a prolonged jail sentence for Frazier, particularly given the volume of the material in the rap sheet he’s amassed going back to 2001, including…

A non-expiring protective order was issued against Jordan Frazier in 2014 on behalf of a woman who is the mother of five of his children. Four of those children are included in the order. In at least one of his court records, “Cake” is listed as an alias for Jordan Frazier.

He was convicted of possession of drug paraphernalia in 2008, and in 2014, he was convicted on charges of simple criminal damage to property, criminal trespass and aggravated assault, according to court records.

The one woman who was the mother of five of his children wasn’t his only partner in procreation; he actually is said to have fathered nine. We’re told, and we find it highly plausible, that Frazier was a drug dealer; while that’s certainly not a justification for shooting him, it would explain why he’d prefer to engage in a shootout with the police rather than being taken to jail and this time being unlikely to get out on bail.

Just once, just once, we’d like to see someone like Gary Chambers communicate a productive lesson from a story like Frazier’s sad end and exhort young people in the black community to avoid repeating his mistakes at all costs. Whether the shooting was justifiable or not it was preventable, and Jordan Frazier was the principal agent who could have prevented it. Had he not left the vehicle, had he not had a gun on him, had he avoided the life he led – which was particularly unfortunate given that he had a working-class upbringing with a father in the home, and he had actually attended college at Southern for a time – he would be alive today.

Chambers could have used the story as a cautionary tale, and in so doing extracted something positive from it. But that’s not who Gary Chambers wants to be. He either believes he can stir more controversy and get more clicks to his web site by embracing a destructive message of attacking the police and attempting to foment civil unrest, or there are people controlling him who are otherwise making it worth his while to do that.

Or else Gary Chambers is so eaten up with hatred, racially motivated and otherwise, of the police and other people not like him, that he can’t help himself.

Either way, as we’ve repeatedly suggested, Gary Chambers simply cannot be associated with Broome if she wants to unify East Baton Rouge Parish under her leadership. Broome’s admonition that people should be calm in the aftermath of Frazier’s shooting rings awfully hollow while Chambers is still a member of her citizens’ advisory board on police procedures.

Interested in more news from Louisiana? We've got you covered! See More Louisiana News
Previous Article Shreveport Cop Car Has Its Rims And Tires Stolen
Next Article APPEL: Why I Voted “No” On A Budget That Increases Spending