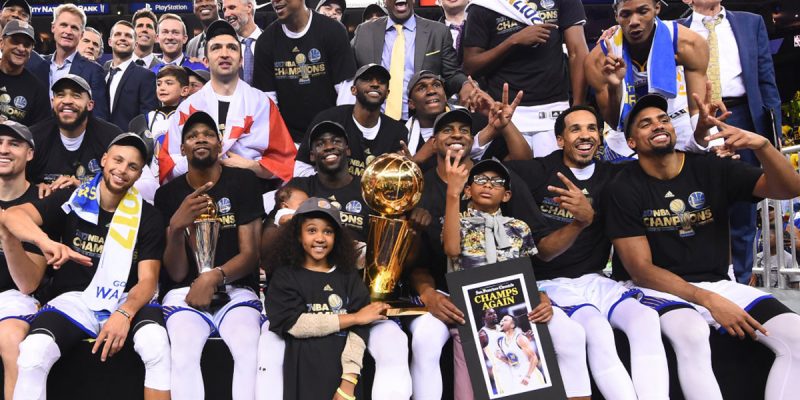 Congratulations to the Golden State Warriors for winning the NBA title last night.

Now, half the country can make a decision whether to consider supporting the NBA again after what the Golden State Warriors “unanimously” chose to do in celebration of that title.

Last month, Michele Roberts, Executive director of the NBA Players Association, stated that if the Cleveland Cavaliers or Golden State Warriors won the NBA championship, neither team would accept an offer to visit the White House. Roberts, a former D.C. public defender and litigation attorney according to The Federalist, suggested both the Cavs and Warriors were against Trump and the new administration.

Hey, it’s a free country. If nobody on the Warriors’ roster wants to meet with the president at the White House and be recognized as a champion, nobody has to. It flies in the face of the old military maxim, “Salute the rank, not the officer,” and it’s a bit of a civil ethic that we attempt to put politics aside when they’re not required – the ceremonial aspects of the job of president don’t particularly require him to be of one party or political persuasion.

After it was announced on Monday that two major sponsors of New York’s Public Theater were pulling funding for a production of a President Donald Trump-themed production of Shakespeare’s “Julius Caesar,” Liberal Twitter went into meltdown mode.

The controversy brewing around the play that sees a Donald Trump-based character assassinated on stage began to grow bigger after Donald Trump Jr. criticized the production on Twitter.

We are withdrawing our funding pic.twitter.com/MlaONF82FN

And Delta Airlines put out a similar statement…

“No matter what your political stance may be, the graphic staging of ‘Julius Caesar’ at this summer’s free Shakespeare in the Park does not reflect Delta Air Lines’ values.”

“Their artistic and creative direction crossed the line on the standards of good taste. We have notified them of our decision to end our sponsorship as the official airline of the Public Theater effective immediately.”

Refusing to meet with the president is not the same thing as staging a dramatic facsimile of his assassination, of course, but it’s the same message – partisan incivility. After all, Clemson’s football team was at the White House yesterday to be recognized for its national championship, and there was no discussion of Republicans or Democrats amid the proceedings.

Nobody cares about Steph Curry’s politics, or Draymond Green’s, or Kevin Durant’s. Nobody wants to care who they voted for. When they make it our business by issuing political statements, they shouldn’t be surprised that they’re alienating half the country – and running off sponsors who are trying to market to that half.

It used to be that people took advice to not make things political when it could be avoided. That was good advice. One would think the NBA might have realized what damage the Colin Kaepernick fiasco did to the NFL’s brand, but the NBA is full of Colin Kaepernicks. And now the public gets to decide how it wants to react to that.