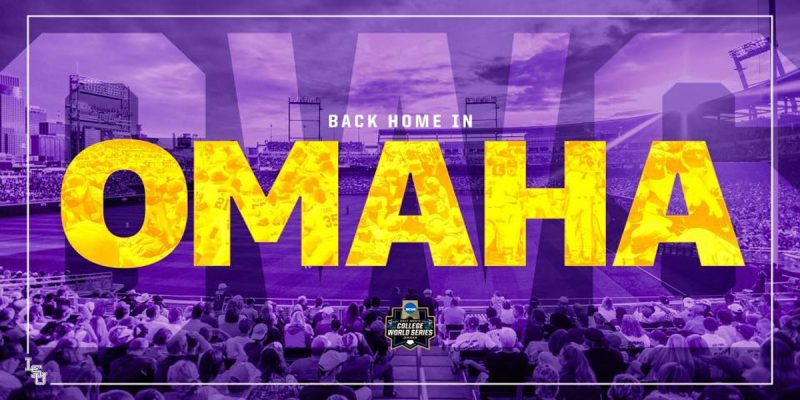 We were going to have a post yesterday about LSU’s baseball team, and the crazy 14-4 victory over Mississippi State Sunday night which propelled them to the College World Series for the fifth time in head coach Paul Mainieri’s 11 years at the Ole War Skule, but events intervened. As this is primarily a political site rather than a sports site, the prospect of a coup d’etat removing a sitting Speaker of the House merited a bit more attention than a baseball game – even if that baseball game kept us up until 2 in the morning.

The rains on Sunday might have made for an imperfect finish – three separate delays meant the final curtain call for Greg Deichmann, Kramer Robertson and Cole Freeman didn’t happen until well past the bedtimes of respectable people – but the game was no less entertaining. After all, Mississippi State’s head coach Andy Cannizaro seemingly did everything he could to prolong the game and enmesh it in rain delays by changing one hopeless pitcher after another, and when LSU piled on run after run by collecting base hits on those pitchers in the ninth inning the game turned into a delicious fiasco.

One of the really fun things about LSU Baseball is that it so often generates those kinds of postseason moments – the point at which the opponent has melted amid the roar of the Alex Box Stadium crowd, and the momentum of a Tiger team rolling like an express train to Omaha leads to run after run being scored. Sunday’s 14-4 game was a lot like the 11-1 rout of Oklahoma in the 2013 Super Regional propelling that team to the College World Series, or the 10-3 mashing of Minnesota in the regional in 2009, or the 21-7 destruction of Cal-Irvine in 2008, or any number of other blowouts fueled by a raucous crowd thirsty for national-championship glory.

Since 2009 those moments of momentum have eventually run their course before LSU could finish the job at TD Ameritrade Park, which is one reason why Mainieri has built up a crowd of gripers among the LSU faithful spoiled by the success Skip Bertman had in building the dynasty. Bertman’s five national championships turned the job of coaching baseball at LSU into one of the hardest in the game; it’s literally a disappointment when an LSU team doesn’t win the whole thing, and it’s an outrage when a season falls short of a trip to Omaha. As such, Mainieri’s demeanor each year between the start of the regional and the end of the super regional reflects a level of stress most people probably couldn’t handle, and he can perhaps be excused for not appearing to have any fun. The buildup to last weekend’s series with Mississippi State, what with the fact LSU had swept State in Starkville during the regular season and the fact Cannizaro had been an assistant to Mainieri for three years before leaving almost at the last minute before this season when the MSU job suddenly opened up, made for some tense moments for him that were obvious. LSU’s somewhat tight play in Saturday’s game, and particularly before busting through with four runs in the 8th inning on the way to a dramatic 4-3 victory, looked a lot like a reflection of the coach’s mood.

But now he’s accomplished all but the most grandiose of goals, and Mainieri can be excused if he senses to a small extent that he’s playing with house money. His team won the SEC West, a share of the SEC regular season title, the SEC tournament, a regional and a super regional. He’s now 48-17 for the season, which is an elite record, and his team has won 21 of its last 23 games and 16 in a row at exactly the right time. He’s in a bracket with Florida State, whom LSU will play on Saturday at 7 p.m. in Omaha, No. 1 Oregon State and Cal State-Fullerton, which is difficult but manageable by Omaha standards (Oregon State is very, very good but one senses they might be somewhat inflated based on their competition – and the Luke Heimlich imbroglio can only be a distraction for them). There is the sense that this team might be better-equipped than any since 2009 to make a run all the way to a title at the CWS.

And then, last night the Major League Baseball draft got started, with the first 75 picks taking place. Mainieri couldn’t have asked for a better result.

The first LSU-connected player going in the draft was pitcher Nate Pearson of Central Florida JC. Pearson, who hit 100 mph with his fastball earlier this season, was a lost cause as an LSU signee at that point; he had a colossal season for Central Florida and it was expected he’d go in the first round. And he did, as he was selected by Toronto with the 28th pick. Just two picks later, though, LSU’s ace pitcher Alex Lange was taken by the Chicago Cubs as the final selection in the first round.

Lange’s selection is a terrific honor for the program. He’s the third LSU pitcher taken in the first round since Alan Dunn signed on as the pitching coach in 2012; not many programs can claim three first-round pitchers in six years. What’s more, the 30th pick has a slot value of $2.2 million, meaning that’s the signing bonus a draftee can expect having been taken there. Lange reportedly turned down a million dollars by one major league team seeking to draft him out of high school, so Mainieri can justifiably claim he made Lange a million bucks by coaching him for three years at LSU.

And when Deichmann was taken by Oakland in the 43rd pick of the draft (the pick was in the first supplemental, or “sandwich,” round), Mainieri could then double that claim. Deichmann was offered $600,000 as a signing bonus last year and turned it down; the 43rd pick’s slot value is $1.6 million.

That’s important, because LSU has three signees who, according to rankings on the draft boards, should already have been drafted but weren’t yesterday. St. Amant pitcher Blayne Enlow, who has been something of a unicorn for LSU recruitniks this entire season, has never been seen as a real possibility to make it to LSU. Enlow’s draft stock has been considered too high, and MLB.com has him rated as the No. 29 player in the draft. But Enlow slipped all the way past the 2nd round and the 2nd sandwich round, and now it might be a real possibility that he could avoid signing a pro contract. The slot value for the 75th pick is $767,000, and with the beginning of the third round starting just before lunch today those numbers are only going down. Enlow reportedly has told major league clubs that he wants a $2.5 million bonus in order to pass up playing at LSU, and while that was a number which was perfectly appropriate for a first round pick it starts to become unworkable at this point. Teams will go above slot sometimes to get a player they really, really want, and there are a few teams this year who have enough money to go far above slot in order to get Enlow – the Minnesota Twins, who are first up with the 76th pick, are the best candidates in that group – but it’s still a sizable ask and unless Enlow is taken very early in the 3rd round today the likelihood of his pitching at LSU goes from almost nil to fairly strong.

Two other signees, Parkview Baptist pitcher/outfielder Daniel Cabrera and West Monroe outfielder Jacob Pearson, were rated Nos. 55 and 56 by MLB.com. They should both have been drafted by now, but reportedly both have seen their stock drop as a result of questions about signability; they both want more money than the numbers would indicate based on their positions on the draft board. Like Enlow, unless Cabrera and Pearson are taken early in the 3rd round it starts to become likely they end up in purple and gold.

The draft begins again with the third round at 11:30 central time. Mainieri is hoping the strong momentum his program has generated with the win over Mississippi State Sunday night and early Monday morning, and with the positive results in the draft Monday night, will continue. But as we all know, momentum is a great thing…while it lasts. Major league clubs might take a fancy to Mainieri’s recruits and kill his momentum for next year’s team – and Florida State and the other teams in his Omaha bracket could do the same to this year’s club this weekend.

UPDATE: Enlow was, in fact, taken by the Twins with the 76th pick to open the third round. Minnesota, which saved more than $2.5 million against slot value by taking Royce Lewis with the first pick in the draft, is in a position to meet Enlow’s number.

We’ll see if they agree to do it.

UPDATE #2: Jacob Pearson was taken by the Angels with the 85th pick in the third round. It was thought that if Pearson escaped past the first 10 picks of the third round he was likely LSU’s. He went in the 10th pick. His, like Enlow’s, will be an interesting negotiation.