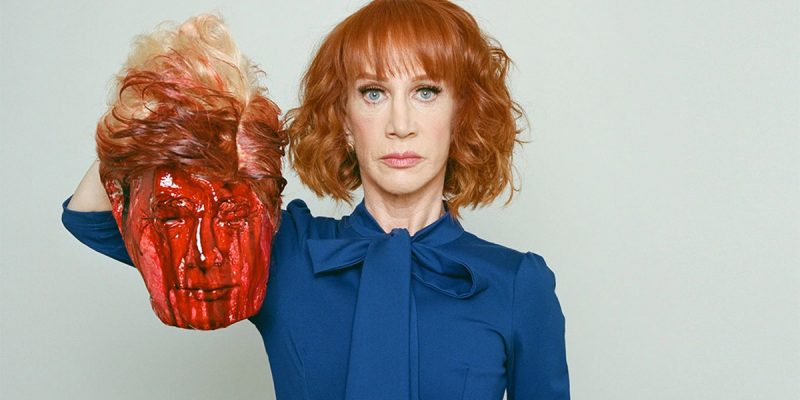 Hey, Kathy Griffin! I was going to tell you that your best work was on “News Radio” 20 years ago, but IMDB tells me that was someone else.

I don’t really remember when I became aware of you, but I remember you being only slightly funny when mocking Clay Aiken and … um… that guy who used to host “American Idol.” Ryan Seacrest! That’s it. I’m not a fan of insult comedy, but you were tolerable to a point.

Beyond that, I watched you banter with Anderson Cooper a couple times on New Year’s Eve, but I’m usually asleep by then, being a middle-aged white Republican and all. All that to say, I don’t recognize you as a huge talent but I don’t hate you. I still don’t. I’m indifferent to you, even after you did a splendiferous job of self-promotion by promoting yourself in the recent photo shoot. Yeah, great job. Everyone knows who you are now. My diverse circle of friends is hardly scientific, but folks on both the Left and the Right think you royally screwed up.

News flash: Notoriety ain’t everything it’s cracked up to be. I’ve never achieved your D-List level, but still. I know. Being well known doesn’t pay the bills, and there’s a huge difference between being well known and well liked, as you’re clearly discovering.

That said, what you did in that photo shoot was, to say the least, inappropriate. It was ugly. It was rude. You’re not alone.

In the wake of your utterly un-OK photo thing, I’ve seen meme after meme of “protests” against the Obama Administration and First Family that included burning in effigy, memes of 44 being hanged or burned, PhotoShopped pictures of the last POTUS as a monkey (or worse). They’ve all been accompanied with whining rants about double-standards and how nobody was upset about those.

Well… no. People WERE upset about those. I didn’t vote for President Obama, but I don’t accept any leader of the greatest nation in the world being displayed in such a way. It’s not cool. It’s racists on the Internet, people no one has ever heard of. Did they face backlash for their actions? I don’t know – BECAUSE NOBODY KNOWS OR CARES WHO THEY ARE. YOU faced backlash because you’re famous and such, although for reasons that are highly questionable.

I have cut people out of my life for making racist, sexist, homophobic, transphobic, anti-Semitic, Islamophobic posts on social media or, somehow worse, in person. I have no patience for that. I’ve also obliterated “friends” for advocating violence against POTUS 45, although I’m not a fan. I almost came unglued five years ago when someone (I don’t recall who) fired gunshots at the White House and someone I know posted that she was more concerned about the building than the occupants.

This is not OK, not in a society that claims to value ALL human life.

All that said, Kathy Griffin, I forgive you, although it doesn’t matter. You screwed up, you said you’re sorry, so whatever. Or maybe I’m just old enough that I don’t get truly upset about such things. I’ll call them out, especially if no one else does, and then I move on. God knows I’ve said and done things I regret, but I regret them as a matter of conscience, not because I faced consequences.

Free speech, you see, doesn’t mean free speech without consequences. We all can face those, you see. You’re facing yours now. Am I sorry? No. Do I empathize? A little. But you just can’t do and say these things and NOT expect responsible people to express outrage.

I was horrified by images of President Obama burned or hanged in effigy, and I surely didn’t vote for the man. Human decency needs to surpass partisanship. It just does. When we stop that, we stop being human. When we become pawns of a party structure, we may as well just climb through those back channels to Moscow and embrace totalitarianism.

Interested in more national news? We've got you covered! See More National News
Previous Article Enter The Boo You, Mitch Landrieu Contest And Get This Cool T-Shirt!
Next Article VIDEO: And The Mishandled Outrage On College Campuses Continues…