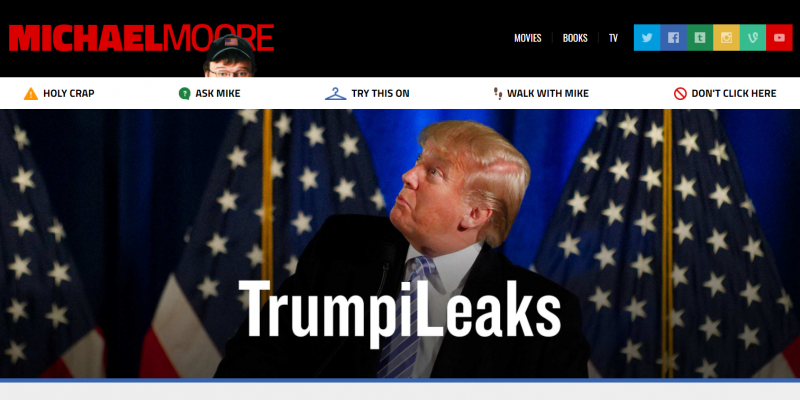 In the wake of Reality Winner’s charges for leaking classified materials, director and producer Michael Moore (Fahrenheit 9/11) just launched a website, TrumpiLeaks, encouraging government workers to leak information with specific regard to President Trump, about whom he’s currently making another documentary. Obviously this administration has had numerous significant issues with leaks, and the president has recently vowed to alleviate those complications. This site is yet another demonstration of the left doing whatever they can possibly come up with to resist the president’s efforts.

The home page of the site reads:

Welcome to TrumpiLeaks. This site provides the most high-powered encryption technology to enable courageous whistleblowers to privately communicate with me and my team. Patriotic Americans in government, law enforcement or the private sector with knowledge of the crimes, lies and general misconduct committed by Donald J. Trump and his associates are encouraged to blow the whistle in the name of protecting the United States of America from tyranny.

Below are several tools you can use to securely send information and documents as well as photographs, video and/or audio recordings. While no form of digital communication is 100% secure, the tools we’re using provide the most secure technology possible to protect your anonymity (and if you don’t require anonymity, you can just email me here).

In an open letter published by the Huffington Post, Moore acknowledged that this is risky and that he may get in trouble, but he justifies his decision to publish this site by stating that in doing so he’s got the back of the American people, you know, just like the Founding Fathers.

Regardless of your opinion of President Trump, encouraging leaks can be dangerous. When classified information gets out and into the wrong hands, our country becomes vulnerable. Is this a genuine effort to “rescue” the American people from the dangers of President Donald Trump or is it just a dramatic cry for attention?