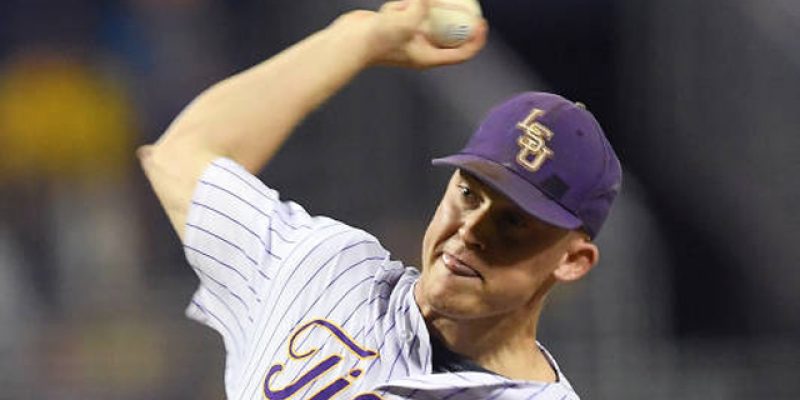 If you’re an LSU baseball fan of long standing, you might well remember the story of Eric Berthelot. That’s a story which could potentially repeat itself tonight when senior right-hander Russell Reynolds, who seems an unlikely choice based on his rather pedestrian statistics, takes the mound to open the championship round at the College World Series in Omaha.

But it didn’t happen for Reynolds this year. His first appearance of the year came in LSU’s first loss of the year, an 11-8 defeat at UNO’s hands in which Reynolds worked only two-thirds of an inning and gave up three hits and a walk with all four baserunners coming around to score. He didn’t take the loss in that game, but his runs ended up being the margin of defeat. Then, after solid efforts in relief appearances against Maryland, TCU, McNeese State and UNO, Reynolds came in for what to date was his signature outing of the year – against Southeastern Louisiana in what would be an 8-2 victory.

That’s when this happened…

Not safe for TV pic.twitter.com/NdVPcY5x1y

Southeastern’s head coach Matt Riser accused Reynolds of doctoring the baseball with a foreign substance hidden under the bill of his hat, which Reynolds didn’t take too kindly to. But after giving Riser a piece of his mind, Reynolds proceeded to walk the next batter on four pitches and that was all LSU head coach Paul Mainieri needed to see.

Which led to this reaction postgame…

Not especially contentious, but Reynolds didn’t appear to be overly focused. And a week later Reynolds took the loss after giving up three hits and two runs in the 6th inning of a 7-6 defeat at Tulane’s hands. He rebounded a little by getting a win after working a scoreless inning in a blowout of Grambling, but then was shelled for two hits, a walk and three runs in an inning of a 9-3 loss to Arkansas. And then after another scoreless inning in a win over Ole Miss he got shelled again, this time for four hits, three walks and four runs in 1.2 innings of a 12-5 loss at Kentucky.

After the Kentucky performance, Reynolds largely dropped off Mainieri’s bullpen radar. He worked a third of an inning without any damage in a 9-3 win over Northwestern State on May 16, and he pitched the final inning of the 13-1 loss to Oregon State (giving up a hit and a walk) at the CWS.

Berthelot had a bit more productive senior season in 1997 – he finished that year with a 7-3 record in 22 appearances, 10 of them starts (he was the usual midweek starter that year). But Berthelot’s ERA, at 5.98, was the worst of LSU’s primary arms.

And Berthelot had suffered through several ignominious performances late in the 1997 season, including giving up five runs in only a third of an inning in the infamous 28-2 beatdown at Alabama’s hands in the season’s penultimate game and getting pounded for five more runs in 1.2 innings of a 12-2 bombing by Alabama in the SEC Tournament final.

So when Berthelot was named as the starter in an NCAA Regional elimination game against Long Beach State the next week, it looked like a promising LSU season was about to go down the tubes. He’d thrown three scoreless innings of relief in a wipeout of UNC-Greensboro in the first game of the regional tournament, but there was little reason to think Berthelot could handle the Dirtbags with the end of the season on the line.

Instead, he turned in a solid performance, getting LSU into the fifth inning with a competitive 3-3 game at the time. And when Patrick Coogan came out of the pen to shut Long Beach down and LSU’s bats exploded on the way to a 14-7 win, Berthelot’s name became synonymous with the senior pitcher who shakes off adversity to come through in the clutch.

That could be Reynolds this year, perhaps under more extreme circumstances.

But if it isn’t, Mainieri is largely playing with house money tonight. Florida is sending sophomore stud pitcher Brady Singer to the mound, but because of two factors – first, the Gators were in Bracket 2 and therefore had their games a day later than LSU did, and second the Gators had to go to Saturday because they lost on Friday to TCU – their other two weekend starters might not be available to start. Ace Alex Faedo threw 115 pitches on Saturday; other than miniscule action Wednesday, it’s not really conceivable he’ll pitch at all in the championship series, while third starter Jackson Kowar isn’t likely available until Wednesday either. Florida will raid their bullpen for Tyler Dyson to start on Tuesday.

Meanwhile, Mainieri has Jared Poche ready on Tuesday and Alex Lange on Wednesday without even forcing them to go on short rest.

If Reynolds can keep the game manageable for 4-5 innings and LSU’s bats can win it tonight, the odds of winning the series become commanding in LSU’s favor. That’s a scenario with which Reynolds’ LSU career would conclude in a storybook fashion.

LSU baseball is all about storybook endings. Isn’t it time for one more?