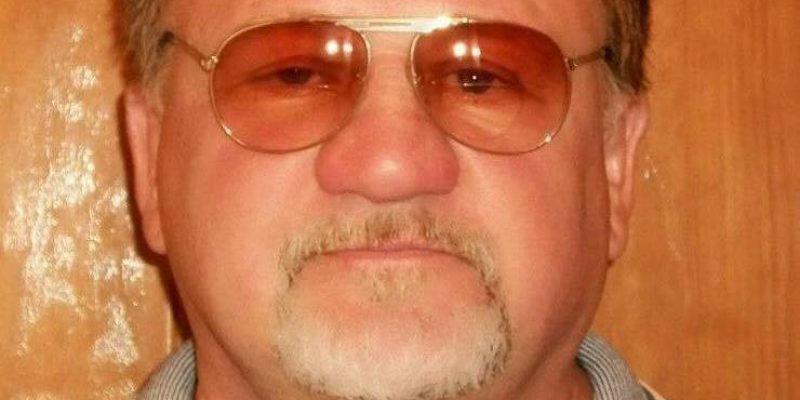 We’ve all heard by now about the frightening tragedy that took place this morning involving one of our very own representatives, but before we get to who the shooter was, we’ll recap the facts. Representative Steve Scalise, who represents the first Congressional District of Louisiana, and others were shot in Alexandria, Va. while some congressmen were practicing for tomorrow’s annual Congressional Baseball Game. Among the others injured are Zack Barth, a congressional aide to Rep. Roger Williams (R-Texas), Special Agents David Bailey and Crystal Griner of Scalise’s security detail, and Matt Mitka, Tyson Foods director of government relations.

Rep. Ron DeSantis of Florida was leaving the practice when a man approached him and asked whether Republicans or Democrats were playing. Less than five minutes later, shots were fired. So who was the perpetrator, and what exactly were his motivations?

James T. Hodgkinson, a 66-year-old from Belville, Il., was the one who pulled the trigger. Back in Illinois, he was the owner of a home inspection business. But his home inspecting license expired at the end of last year, and about two months ago, he moved to Alexandria (and he may have been living out of his car). He was allegedly seen several times hanging around the YMCA near the field where the shooting took place.

But who was he, really?

In the past, he’s been charged with a few violent crimes: pulling out his daughter’s hair, punching a woman in the face, and even shooting a man, but the charges were dropped. Clearly, Hodgkinson had maniacal tendencies.

His social media also speaks volumes about his radical nature. Upon visiting his Facebook page, it’s immediately apparent that he was a Bernie Sanders supporter – so much so that he volunteered on Sanders’ presidential campaign. Hodgkinson also frequently used his Facebook page to express his frustrations with Republicans in Congress, and he once shared a political cartoon bashing Steve Scalise in particular.

On March 22, around the time he moved to Alexandria, he posted repremanding the President: “Trump is a Traitor. Trump Has Destroyed Our Democracy. It’s Time to Destroy Trump & Co.” This essentially confirms that this was a politicized action. This morning’s disaster was his first attempt at “destroying Trump & Co.,” and fortunately it was also his last.

But what’s almost as disturbing as the shooting itself are the reactions we’re witnessing. Take a look at a few for yourself… 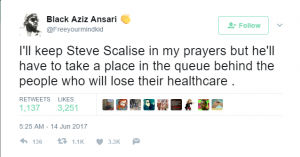 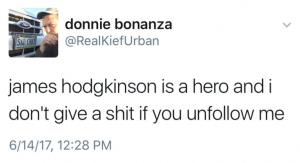 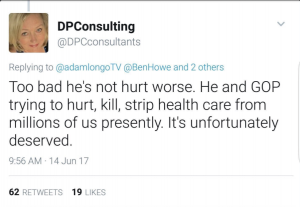 Has society really become this hateful? Regardless of political affiliation, disagreements in ideology, etc., we’ve got to maintain respect for life. What’s happened today sends a frightening message, and anyone who thinks that furthering the resistance and divisiveness will accomplish anything positive for our country is grossly misguided.