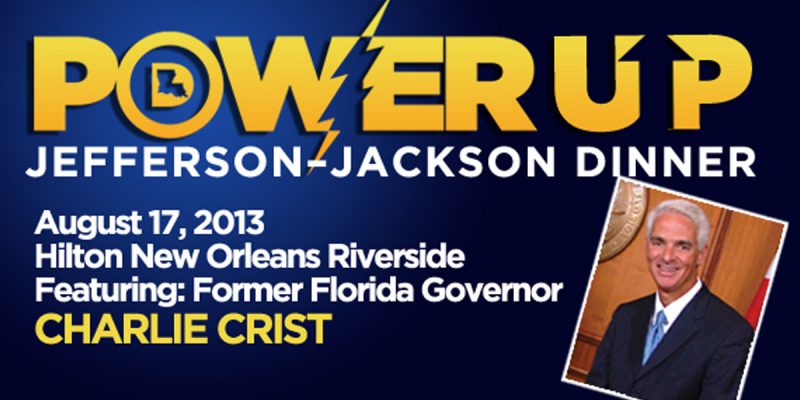 Walk inside the US Capitol rotunda, the epicenter of American government and heritage, and you will see a collection of giant paintings and statues that represent hundreds of years of heroes in our national history, from the arrival of European explorers and colonists to 20th century civil rights leaders.

One of the eight John Trumbull paintings that measure twelve feet by eighteen feet depicts our Founding Fathers gathered in what later be known as Independence Hall.  The iconic painting prominently features the lead author of the Declaration of Independence, Thomas Jefferson.

Jefferson is also represented with a bronze statue.  Across the rotunda from it is a bronze statue of Andrew Jackson.  At the base of Old History’s memorial are the words “Hero of the Battle of New Orleans”.

Perhaps no other two presidents had a more profound impact on Louisiana.  It was Jefferson who acquired the Louisiana Territory from Napoleon and it was Jackson who commanded the successful defense of New Orleans in a battle that would transform American politics far beyond his later election.

The two historical heroes were considered the “Founding Fathers” of the Democratic Party.

Jefferson’s anti-Federalist faction would be known by a few names, though history has generally labeled it as the “Democratic-Republican Party”, the forerunner of the modern Democratic Party.

When America essentially became a “one party” country in the aftermath of the Battle of New Orleans, the party split into factions after the contentious 1824 presidential contest, with Jackson becoming the Democratic Party’s first president.

And for many years, the Democrats proudly claimed lineage to these titans of American history.  That both men hailed from the South didn’t hurt, a region that overwhelmingly supported the Democratic ticket from the end of Reconstruction until Dwight Eisenhower and Barry Goldwater began to crack the “Solid South” for the GOP.

But as the forces of political correctness crept into positions of greater influence within the Democratic Party, the name for the party signature event got shortened to the “J-J Dinner.”  I used to tease Democratic activists that it was swell they were honoring the comedic career of actor Jimmie Walker and I hoped they had a “DY-NO-MITE” turnout.  They were not amused.

It seems 217 years after Jefferson became president (and 154 years after the Emancipation Proclamation), Democrats just became uncomfortable with Jefferson and Jackson having been slave owners.  Add to Jackson’s fresh indictment sheet, his role in clearing Native Americans out of the southeast.

As more state Democratic Parties got hijacked by progressives, the J-J Dinners assumed a new “identity”.

In 2015, Iowa’s Democratic Party voted to boot the two heroes from the name of what was one of the party’s most prominent event due to the Hawkeye State’s presidential caucus.

“The vote today confirms that our party believes it is important to change the name of the dinner to align with the values of our modern-day Democratic Party: inclusiveness, diversity and equality,” said Iowa Democratic Party Chairwoman Andy McGuire.

You can add bowdlerization and revisionism to her list of “modern” values.

As other parties did their own change, I wondered if Louisiana would take the same “history swan dive” seeing that this state’s Democrats were generally more conservative than Maine’s Republicans.

I mean Jefferson made Louisiana part of America and Jackson kept New Orleans from being seized by the British?

Well this is no longer the Democratic Party of John Breaux.

Louisiana Democratic Party chairwoman Karen Carter Peterson announced last week that the J-J Dinner has been remade into the “True Blue Gala,” a name that evokes an image of a bunch of Smurfs circle dancing in cocktail attire.

Chairwoman Carter said the change reflects an attempt at “rebranding” the party and to attract rising stars within the party to appear at their fundraisers, as the Jefferson-Jackson connection might keep “woke” progressive figures away from the event.

Jackson was getting dumped to score an appearance from the latest “fresh face” the media gets the tingles for.

Jackson did not just serve as his party’s first president but was a transformative political figure, considered the country’s first modern president and, until the arrival of the post-modern social justice movement, one of its most prominent heroes.

Jackson’s second campaign for the White House heralded an expansion of democracy in the United States.  In the 1824 election, only 366,000 people cast ballots but four years later the number of voters who participated exceeded 1,000,000 for the first time in American history.

I suppose it’s understandable that the aforementioned is lost on the “anti-History” party and the Louisiana Republican Party should hire two guys to dress up as Jefferson and Jackson to picket their “True Blue Gala” in August.

The Louisiana Democrats have sold out one of our Founding Fathers and the Hero of New Orleans for the sake of conforming with the latest craze in cultural Marxism, as they collaborate with the progressive agenda’s goal to methodically rebrand America’s early heroes as villains and pariahs to make room for more contemporary ones reflective of the new party line.

The change also reflects the party’s evacuation from the south as they cling to their densely populated politically reliable niches along the country’s coastlines. As late as 1996, a Democratic presidential candidate had a legitimate shot at carrying the state; now they can only hope to carry ten or more parishes.

The national Democrats are more the party of Elizabeth Warren and Bill DeBlasio than Jefferson and Jackson.

The Louisiana Democrats have kicked Andy Jackson off their dais; how much longer before they push to remove him from the pedestal in front of St. Louis Cathedral?