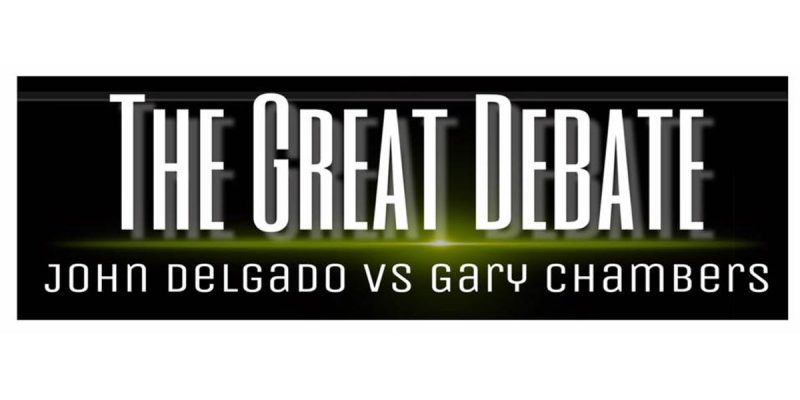 For some of our readers, we imagine this will be something akin to the Iran-Iraq War, about which Henry Kissinger asked “Why can’t they both lose?” That said, the Delgado-Chambers debate coming via an undisclosed location will cover the future of Baton Rouge – a topic of some import to people not just in the capitol area but statewide; after all, with the damage Mitch Landrieu has done to New Orleans, some of which could well be irreparable, it isn’t very appetizing to think Louisiana’s second-largest city would enter a state of collapse as well (not to mention the current directions of Shreveport and Monroe).

In any event, here are the particulars…

John Delgado and Gary Chambers meet face to face for THE GREAT DEBATE!

You don’t want to miss this! Feel free to SHARE this event and invite friends!

A link to each of their live videos will also be posted here in the event.

This will take place at 2:30 p.m. tomorrow. Here’s Delgado’s Facebook page if you want to watch it. We’re not posting a link to Chambers’ page; there are plenty of places you can find it from.

The one we liked more than anything was this one…

We pretty much know how this is going to go – Delgado is going to trash Sharon Weston Broome as a terrible mayor, which she is, and Chambers is going to call Delgado a racist for doing so. Chambers will probably reference this site at some point as an example of that racism (whatever, dude), and attack Delgado for having cross-published an open letter he wrote to Broome both on his Facebook page and here, and Delgado will probably be less than effusive in his defense of us, which is fine given that we’ve laid some haymakers on him at various times during his tenure as a Metro Councilman.

We told Delgado what he needs to do is to inform Chambers that all of the stupid things he believes came to him courtesy of a bunch of old white guys from Germany who originally dreamed up the cultural Marxism and Critical Race Theory which tumble forth out of his mouth all day. We’re not sure Chambers will have much of a response to that.

Anyway, it’s at 2:30 tomorrow. And it will most assuredly be available to watch from the archives after the fact.

Interested in more news from Louisiana? We've got you covered! See More Louisiana News
Previous Article The East Baton Rouge School System Is A Sinking Ship Which Can’t Be Saved
Next Article BAYHAM: The Louisiana Democrats’ War On America’s Heroes