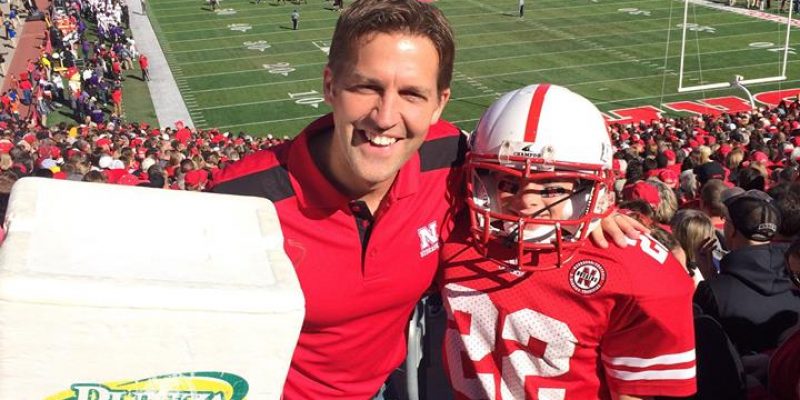 Some people may be opposed to gambling, but the friendly wager between U.S. Senator Ben Sasse (R-Neb.) and Independent Journal Review’s Benny Johnson is one thing we can all get behind.

In November 2016 the two had a back and forth humorous exchange on Twitter that ended with a bet on the football game between the University of Iowa Hawkeyes and the University of Nebraska Cornhuskers. This was the second year the two had made a bet. The first time Ben Sasse lost the bro-bet and was forced to wear an Iowa Hawkeyes’ pin in the Senate committee hearings.

When Benny Johnson took to Twitter this year to remind Ben Sasse of his embarrassment, Sasse replied he was too busy serving people to deal with the “two-bit” journalist’s taunting.

Sorry, no time for your taunting.
One of us has been serving folks
& we both know u couldn't pass the backgrnd ckhttps://t.co/dQLCa5QEFw https://t.co/cyyaueSVxx

Sen. Sasse had taken to driving for Uber when he was home as a way to get to know his constituents and learn what they really thought and were concerned about.

I like to work alongside and for Nebraskans.
I drove uber yesterday.
(For charity–I'm obv'ly not allowed to make any outside money)

Sasse even had to deal with drunk passengers and tweeted out some advice. “Pro-Tip: If you throw up in an uber, the surcharge can be substantial. Upside: It’s a market incentive to get drivers to agree to Sat. pm work.”

Benny Johnson was not going to let Sasse get out of a bet that easily and took his response as a challenge to drive for Uber.

OK seriously though, are you challenging me to drive an @Uber? https://t.co/XdflscHm5e

IF–& this is yuge "IF"
-u can pass the background ck…
I'll challenge u to an Uber-off on the outcome of #Huskers vs #Hawkeyes ftball Fri? https://t.co/TlYOYz34x4

Terms were laid out and the loser would have to drive for the opposing team on their campus in that team’s gear (personally I think driving in their own team’s gear would have lead to more heckling).

Meaning u will b driving the beautiful ppl of Iowa City https://t.co/p27uOPgyXb

You're on.
Hope you like looking at yourself in #Husker gear.

Well on that fateful Friday in November Sen. Ben Sasse’s Nebraska Cornhuskers lost. No, they didn’t simply lose. They were destroyed by the Iowa Hawkeyes 40-10.

Sasse being true to his word showed up in Iowa ready to drive. To make matters even better, when the media caught wind of the Senator’s travel schedule rumors circulated he was headed to Iowa to plan to challenge President Trump in 2020. He answered those rumor on Jake Tapper’s “State of the Union.”

“Well, first of all, let’s be clear why I’m going to be in Iowa this weekend. I don’t want to admit it anywhere, let alone on national TV, but Nebraska lost to Iowa last year in a football game, and I lost a bet,” Sasse told Tapper. “So I have to drive Uber in Iowa next weekend. So that’s the reason I’m going to be in Iowa. It’s about Hawkeyes and Huskers bloodletting on the football field and the aftermath of that.”

Benny John is taking full advantage of Sasse’s loss and rubbing salt in that would quite well to the enjoyment of us all.

If you were wondering why I'm in Iowa tonight, here is a hint:

Congratulations to Benny Johnson on his second win and better luck to Ben Sasse and the Cornhuskers next year. Comment below and let us know what their next bro-bet should be?