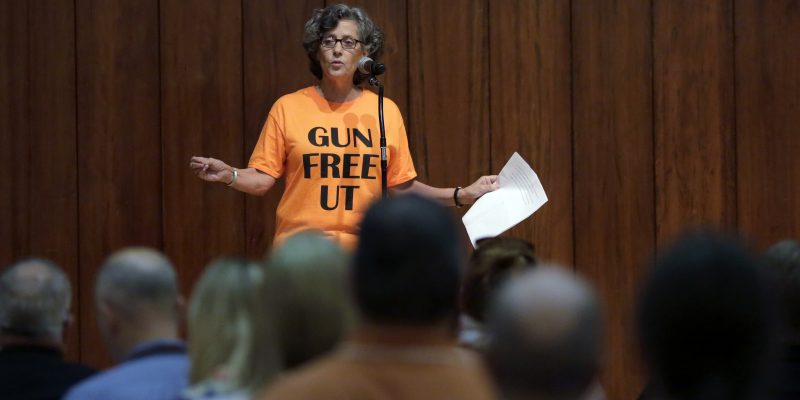 In 2015, Texas became the tenth state to pass legislation allowing those with a License to Carry (LTC) to conceal carry legal handguns on public universities within the state. Three professors from the University of Texas Jennifer Glass, Lisa Moore and Mia Carter argued in federal district court the free and open debate could be squelched if students feared others could legally carry guns to class.

Plaintiffs allege that “classroom discussion will be narrowed, truncated, cut back, cut off” by the allowance of guns in the classroom. One professors avers in an affidavit that the “possibility of the presence of concealed weapons in a classroom impedes my and other professors’ ability to create a daring, intellectually active, mutually supportive, and engaged community of thinkers.”

Judge Yeakel, a University of Texas graduate and President George W. Bush appointee, found that the professors had “failed to substantiate their fear.”

Texas Attorney General Ken Paxton released a statement praising the ruling. He argued that “[the] fact that a small group of professors dislike a law and speculate about a ‘chilling effect’ is hardly a valid basis to set the law aside.”

Antonia Okafor was the Southwest Director for Students for Concealed Carry when the law was passed and recently founded EmPOWERed “a movement of women on college campuses across the country who feel empowered when they use their gun for self-defense.” She also commended the ruling, stating that “[students] should have rights like any other citizen. Sadly, it has taken incidents like Virginia Tech to awaken people and legislators on the danger unarmed students face in the classroom.”

In 2007, Seung-Hui Cho, a senior at Virginia Tech shot and killed 32 people and wounded seven others. The previous year a bill had died in the Virginia House of Delegates that would have allowed Campus Carry by licensed students. The Virginia Tech Massacre was the deadliest mass shooting carried out by a single gunman in U.S. history until last year’s deaths at the Pulse Nightclub in Orlando. Both establishments banned the legal carry of firearms.