This fall, Louisiana voters will go to the polls and elect a new state Treasurer, a new Public Service Commissioner, a new Mayor of New Orleans, and a new state rep in some districts. Here’s a list of the candidates who are running.

Derrick Edwards is the sole Democrat in the race and he should get at least 20-30% of the vote for that reason alone. Depending on how the race shakes up, he may already have his runoff ticket punched.

The real race is between the three main Republicans in the race: Angele Davis, Neil Riser, and John Schroder. Schroder has the most money in the bank, but Neil Riser is leading the fundraising race raising $164,000. Riser has a solid base in north Louisiana and has led all other Republicans in recent independent polling. Meanwhile, Angele Davis has been sending out feelers to the courthouse crowd, who was expected to back Julie Stokes before she decided not to run.

Whoever makes the runoff out of the three Republicans has to be favored to win in November.

Damon Baldone is the current acting commissioner, having been appointed by Governor John Bel Edwards. Craig Greene was beginning to line up the support of the business community. Meanwhile, Lenar Whitney is trying to vie for tea party support.

The three major candidates in this race are Covington City Councilman Mark Wright, Justice of the Peace Casey Revere, and retired U.S. Air Force Colonel and former U.S. Senate candidate Rob Maness. However, this is a state representative race so realistically all four of these candidates have a shot at winning. It depends on which candidates are willing to put the campaign work necessary to win.

Mayor, City of New Orleans (you may want to zoom this in) 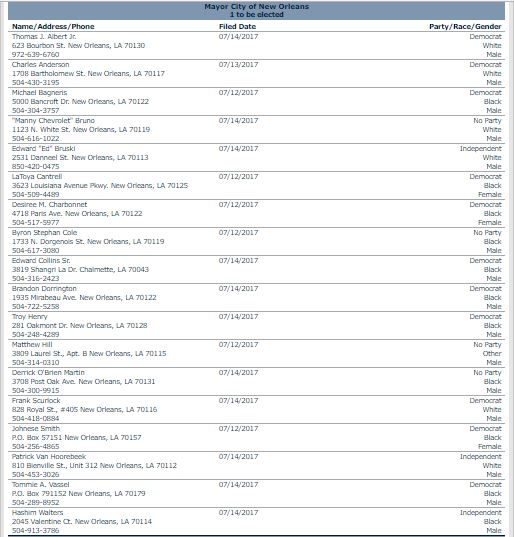 18 candidates are running for Mayor of New Orleans but there are only five who can even remotely considered big names in the race. The clear fundraising leader is former city judge Desiree Charbonnet. The other four who will have the cash to make an impact are City Councilwoman Latoya Cantrell, former judge Michael Bagneris, businessman Troy Henry, and businessman Frank Scurlock.

But the race for mayor is lacking the “big name” that could suck out all of the oxygen in the race. The key to victory in this race will be who get the most bang for their buck while raising enough money to increase their name ID.

What’s telling is that Democrats were unable to find high-quality candidates for either Treasurer or the PSC. On the other hand, there are no Republicans running for Mayor of New Orleans.

The primary is on October 14 with the runoff on November 18.

Interested in more national news? We've got you covered! See More National News
Previous Article As Conservative Activists – We Must Confront Our Leadership
Next Article Yes, Jeremy Alford, We Do Need A State Treasurer, But…