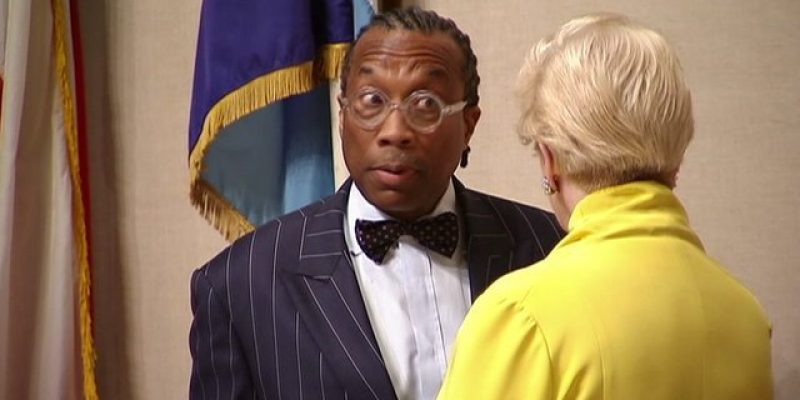 Honoring fallen law enforcement is seen by many as the least a society can do in the aftermath of such tragedies. However, according to one Dallas County Commissioner, these fallen officers shouldn’t be honored at all.

John Wiley Price, a County Commissioner in Dallas County, was the only member of the county’s commissioner’s court to dissent against a resolution brought forward to honor the five Dallas police officers who were gunned down in cold blood. The resolution, which was not expected to be controversial, would have declared July 7th, 2017 as a day to honor all fallen law enforcement officers.

Rather than vote yes to the motion, Price abstained and then exclaimed, “It’s interesting in this country how you again continue to try to frame a narrative with regards to other people who have lost their lives at the hands of law enforcement. Any loss of life is bad.” Price then went on to insinuate that unjust police violence was what led to the shooting of the five officers in Dallas.

These comments have led to an obvious outcry from the surrounding community, including the Dallas Police Association who demanded an apology and in a statement decried Price as another “elected official who is showing complete disregard and disrespect to the men and women who protect this city.” Even Sheriff Lupe Valdez shot back at the comments: “It’s not that they died, because everybody dies. It’s how they died…We need to continue as people in blue to make a difference so that both sides, both of us hurt when somebody dies — it’s not officers go home safely, it’s let’s all go home safely.”

Price’s behavior, though shocking to some, is nothing new to those who live in Dallas County. Price has served as commissioner since 1985, and in his 32-year tenure on the court, he has been a source of controversy almost incessantly. To be sure, Price has not left his disagreements with the law enforcement community by the wayside; rather, he has paraded them at the forefront of his political career. In 1990, Price insisted upon a “call to arms” should the city manager refrain from picking a new police chief that was more in tune with the minority communities of Dallas, threatening violent action against Dallas police in an expletive-laden statement. As recently as 2009, Price has directly focused on law enforcement issues, where he unleashed an outburst on the court regarding an investigation regarding the Dallas County Constables.

These incidents, in addition to his long career of similar outbursts, give the perspective of the man that decided the death of five Dallas officers, was somehow their own fault. Price continues to stand by his statements, as is his trademark in virtually every controversy he has been involved in, despite the onslaught of calls for a public apology.

According to an October 2016 poll by Gallup, 76 percent of respondents stated that they have a “great deal of respect” for law enforcement, a stark 12 percent increase from their last poll in 2015. However, with a growing divide and ample distrust between law enforcement and minority communities with events such as those in Baton Rouge and the slaying of Darren Goforth in Houston, it appears that rhetoric akin to that of Price’s has become much more common.

Despite Price’s abstention, the vote to honor the slain officers succeeded in the Dallas County commissioner’s court. Flags flew at half-mast as scheduled on July 7th, 2017 to honor every officer who died in the line of duty.

Interested in more news from Texas? We've got you covered! See More Texas News
Previous Article Republicans Vote No Confidence in Texas Speaker Joe Straus
Next Article Have You Ever Seen So Much Caterwauling Over A Failed Tax Hike?