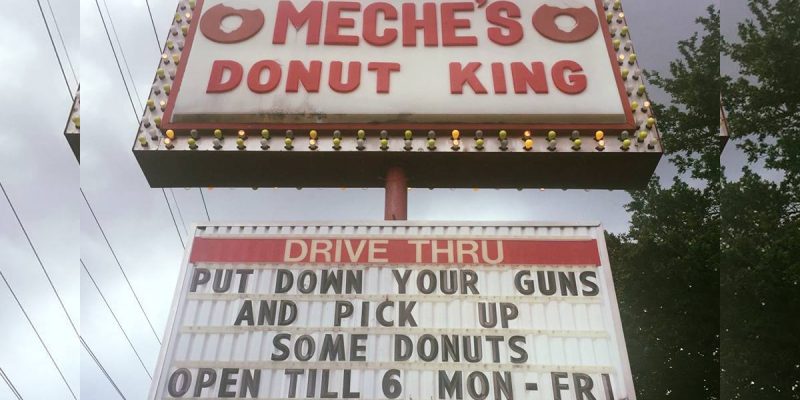 Last week, a donut shop in one of the most crime-ridden parts of Lafayette put out a sign in front of their store to stop shooting people and eat a donut instead.

Most would think that’s great advertising and a good recipe to a happy life. But apparently the store started to receive a barrage of complaints from people upset about the sign.

It became such an issue that the owner issued this statement on his Facebook:

Local media picked up the story, and reported that the owner got the idea for the sign after he was asked to install surveillance cameras outside his shop for an investigation. From the report:

It’s a response to a rash of shootings in that part of town this year. All but five of the shootings have happened within two miles of the restaurant. Ten of them were within a mile of the shop, two of them happened just blocks away.

Some reactors to the story were angry that the store was unfairly targeting North Lafayette, which is indisputably where the most crime occurs. A few people were also concerned there was an anti-Second Amendment statement in the sign, but that was quickly debunked. The store even uses some libertarian imagery on its Facebook page.

Most of the locals who visit the shop didn’t seem to have a problem with the sign, either.