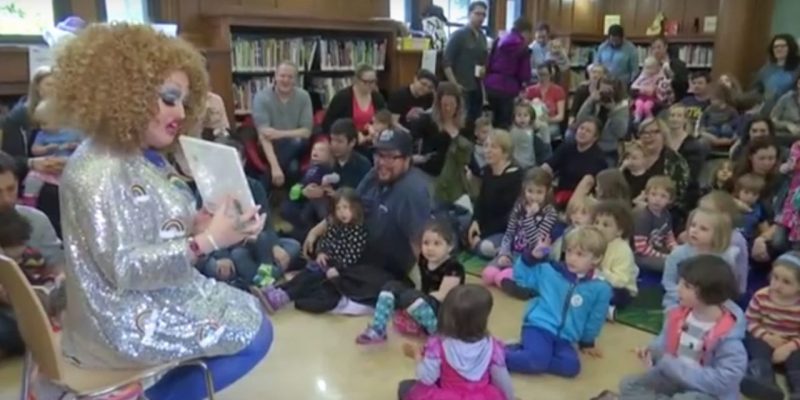 Kids, some as young as two, were exposed to a drag queen telling them stories this past Saturday at the Algiers Point Hubbell branch library. The Drag Queen story hour began in San Francisco and has now made it to New Orleans.

Drag Queen Kimberly Clark read stories to the kids, some of them, understandably, with confused looks on their faces.

Clark says, “Drag Queens show kids they can be anything they want to be . It doesn’t matter what body you were born into, you can dress up how you want. We are beautiful, proud, lovely, queens sharing some beautiful literature with the youth of the world.”

Clark went onto say, “Drag queens are fabulous story tellers for kids because we are these kind of magical, unicorn, versions of people that show kids they can be anything they want to be.”

Someone’s gender confusion is their own business. If you think you are a woman trapped in man’s body than it’s none of my business. Or if you are a dude who likes how it feels to wear woman’s clothing, then have at it. Be who you want to be. But the idea of indoctrinating toddlers to your gender confusion message is beyond reprehensible. Most of these kids haven’t even been to the first grade yet!

I understand the gender confusion movement is the hip thing these days and everyone has a right to express themselves. But it is already supported by the media and just about every other major sphere of influence in our society. Even some churches are on board. Isn’t that victory enough? Does the movement also need the approval of kids?

Innocence is a big part of childhood and these days kids are losing theirs at younger and younger ages. This is not healthy.

I can empathize with someone who has a so-called alternative lifestyle wanting to be accepted by society. I get that. But what the gender confused have to realize is that some people will never condone their sexual metamorphosis and you can’t force them to no matter how often they are labeled bigots.

Kids shouldn’t even have to think in term of sexual identity especially as toddlers. It’s the right thing to do for the gender confused to leave the kids out of their crusade for acceptance.

The parents of the kids at the drag queen story hour should know this as well as officials at the New Orleans Public Library funded by taxpayer dollars.

Video of the drag queen story hour in New Orleans can be found below.