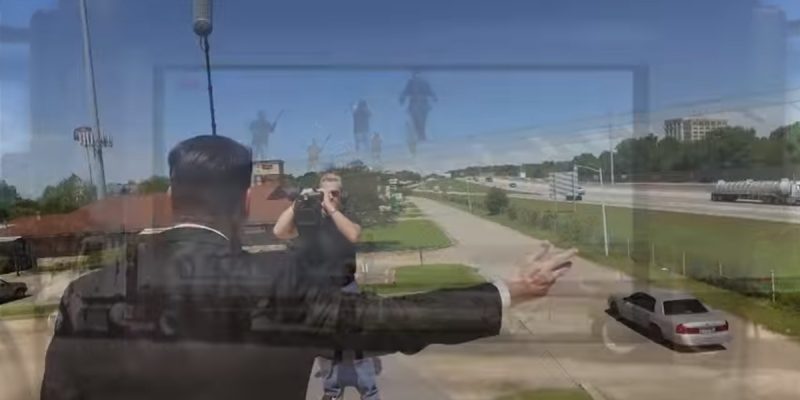 Specifically, the meteor that wipes the whole planet out, so that whatever the cost to the world at least we ain’t gonna have to deal with the Gordon McKernan vs. E. Eric Guirard Battle Of The Scumbag Ambulance Chasers. Call it the E Guarantee vs. the G Guarantee…

McKernan, whose popular television commercials show him atop an 18-wheeler with arms folded, isn’t laughing about Guirard’s latest TV ad that mocks McKernan by depicting a man bearing McKernan’s likeness falling off a big rig while filming a commercial spot.

There is a lil’ entertainment here. We bring y’all E’s new TV ad…

If you don’t know who E. Eric Guirard is, he’s a legend in Baton Rouge. He wrote terrible songs, he got himself on TV countless times, and he was lawyer who had to vacate the scene in 2009 due to the terrible lack of sympathy of the Louisiana Supreme Court. Those bastards disbarred him. And why? Well, they took unkindly to the idea that he and his partner hired up some people who weren’t lawyers and had ’em callin’ insurance companies to wrangle settlements.

At issue was the fact that the law firm employed “case managers,” all non-lawyers, who helped process the personal injury claims prior to litigation and earned hefty compensation checks along the way.

“We recognize a dishonest or selfish motive, a pattern of misconduct, and substantial experience in the practice of law,” the court wrote in a unanimous opinion released today.

Guirard and Pittenger “harmed their clients” by depriving them of a thoughtful, individualized and professional legal analysis of their cases, the court ruled.

“Of course, these egregious practices profited (Guirard and Pittenger) as well,” the court wrote.

Egregious. Is this egregious?

So that was, for a while, the end of the E Guarantee – an’ rightly so, since the E Guarantee was all about the allegation that if you called his number he’d make sure there was a lawyer who would work your case rather than some chick he hired because she was pushy when he met her in a bar, or somethin’.

Guirard was out of the game a long time, and when he hadda step away the slip-an’-fall or car-crash law scene changed a lot. First of all there were his old employees who ended up becoming Dudley DeBosier, the Personal Injury Lawyers of The LSU Tigers, with obnoxious-as-hell commercials to match…

Yeah, that’s how shameless LSU is about takin’ sponsorship money. They took a check from these guys even though their phone number in Baton Rouge is – and we poop you not – fo fo fo, fo fo fo fo. No, that ain’t made up. Go an’ dial it.

If nothing else, though, these guys contributed to the greatest thing that has ever happened in Baton Rouge.

But bear in mind, these guys are the ones who used to work for the E Guarantee an’ who bought him out of his law firm when he an’ that Pittenger dude got bounced.

But they weren’t hot enough to corner the ambulance-chasin’ market in Red Stick. Because when the E Guarantee went down, another dude got all swole up.

There was an old-school lawyer named Jerry McKernan in Baton Rouge. He was an old crony of Edwin Edwards’, and he had gotten to the point where he was a little past the slip-an’-fall or car-wreck stage. McKernan had set himself up as almost respectable; he was at one point on the LSU Board of Supervisors. But Jerry died in 2012 an’ his son Gordon then took over the family business.

Now, Gordon is not an understated ambulance chaser like his daddy was. Gordon has no problem matchin’ the E Guarantee tit for tat. In fact, this whole case is about the fact Gordon decided to take advantage of Guirard bein’ stuck in Supreme Court-mandated retirement and banished to bad songwriting in order to do to his copyright more or less what Robin Thicke did to Marvin Gaye.

And that’s by no means the cheesiest ad Gordon runs…

The big truck wreck thing is such a big deal with this cat that when he built the building for his ambulance chaser law office right there at College and I-10, his plan was to put a mockup of an 18-wheeler on the roof, but the people who owned the ol’ Xerox Building threw a fit about it because the big rig would block their tenants’ view of the interstate.

Thank God for that, right? Because Baton Rouge can do without that last lil’ bit of cheeseball advertisin’ along the interstate. And Oh, God, the billboards along the interstate with this McKernan guy. It’s so bad the funniest thing on Facebook is a page specifically rippin’ on him for it.

Meanwhile, everybody thinks Gordon, who lacks the musical “talent” that the E Guarantee’s got, is gonna eventually plow his millions in car-crash and slip-an’-fall money into a run for some sorta political office. Otherwise there is no way he would pay somebody to put this crap on TV…

Anyhow, so the E Guarantee wangles his way back into the legal racket and starts runnin’ ads, and he decides his best way back into bein’ the king of the ambulance-chaser hill is to knock off the guy currently at the top. So he cuts that ad makin’ fun of Gordon, and Gordon does exactly what an ambulance chaser who gets his feelz hurt could be expected to do – he sues.

The rest of us can look at this an’ hope they both lose. It’s like the Iran-Iraq War of sleazy lawyer fights. Before it’s done, like I said, we might just get so despondent that we just root for the meteor to come and wipe the problem out – and if that means we go, too, it’s a small price to pay to get rid of both the E Guarantee and that of the G.