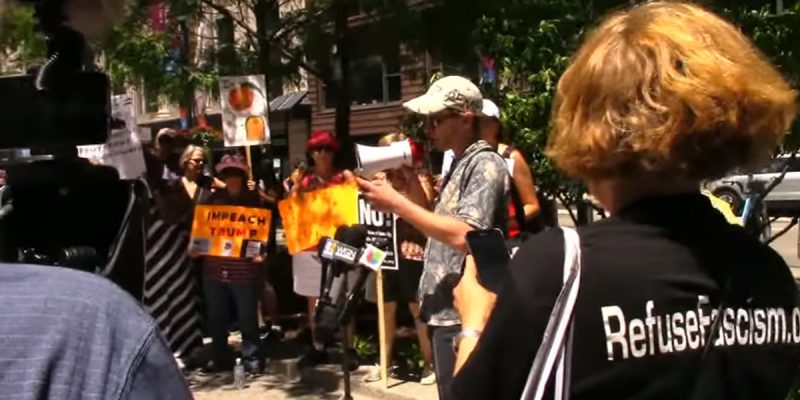 There isn’t a lot to this other than a good snicker, but we thought we’d pass it along anyway as it’s a great opportunity to make a point we’ve wanted to make for a while. What you’ll see in this video is a brave goofball who showed up at the Impeach Trump March in Chicago on July 2, which was an Antifa event, and proceeded to give a relatively programmatic left-wing speech…which had the one peculiarity of consisting entirely of quotes from Adolf Hitler.

It’s entertaining, because the troll in question received a rather polite reception while he was rattling off fascist nostrums at a supposed anti-fascist rally – it isn’t like there was a soul there with the faintest clue that he was quoting Hitler or that what he was spouting was the very ideological cant they’ve pledged themselves to opposing, much less a philosophical opposition to it. But it gets better, because after he’s done popping out a suitable list of Hitler quotes, he gets a relatively agreeable response from the “anti-fascist” mob on hand.

And then there’s the kicker, which is really entertaining – the leftist clown organizing the event – who’s wearing a t-shirt with the URL “Refusefascism.org” across the back, hits the troll in question up for his participation in future events. Even the organizers of these dog-and-pony affairs haven’t the faintest clue what real fascism is.

What’s most educational about all this is what it does to the bullshit narrative of how fascism is somehow a right-wing political system. This is based, like most of what you’ll hear from American leftists nowadays (and lots of European leftists as well), in old-school Soviet propaganda from the Cold War days, but it’s entirely without merit. You don’t have to do too much analysis of Nazism beyond the name of the Nazi party – Nazi, after all, stood for Nationalsozialistische Deutsche Arbeiterpartei, which, translated, means the National Socialist German Workers’ Party. That doesn’t particularly suggest hard-core limited-government, laissez-faire conservatism. The only difference between the Nazis and the communists who beat each other bloody on the streets of Germany in the early 1930’s was that the Nazis were “national” socialists and the communists were “international” socialists. Either way, there was no civic or economic freedom on order.

And yet if you happen to, let’s say, show up at a left-wing political demonstration and announce yourself as a conservative – which we have from time to time done – you will invariably be called a Nazi by people who, when challenged to support such an allegation, have absolutely zero ability to do so. If you’re willing to hang in there and not get angry, you can find great fun in picking your tormentors to pieces for their lack of intellectual rigor. Make sure you’re not in a position to suffer physical consequences to your rhetorical victory, however – we know that’s a possibility in this day and age.

The long and short of all this is Antifa may call itself anti-fascist. That’s an outright lie; the Antifa clowns display every hallmark of a fascist organization, even in the particulars they would deny. They’d say they’re anti-corporatist and that divorces them from the fascist milieu, and yet they’re funded by the corporate hedge fund master George Soros and other non-profit foundations funded through corporate philanthropy.

Here’s to more videos like these trolling the 21st century “anti-fascist” movement with references to Hitler, the most prominent fascist figure of the 20th century. The Left likes to use Hitler ad nauseam to push its own slurs against American conservatives when it’s clear Hitler comes closest to their own philosophy. That’s a fact we should confront them with again and again.