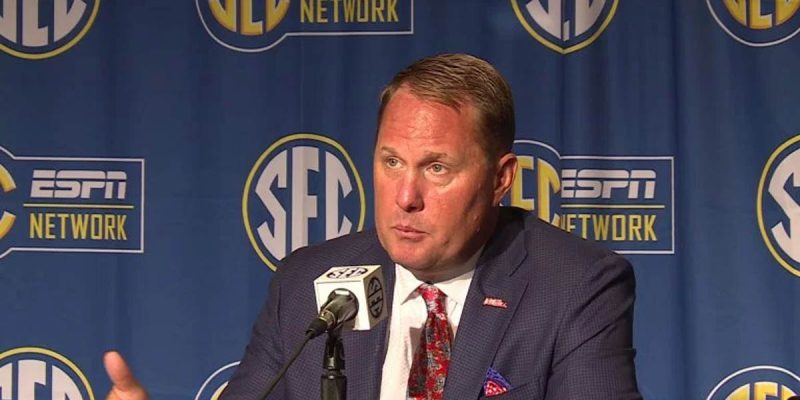 Yesterday’s news that Ole Miss head football coach Hugh Freeze had resigned – which was a polite way of saying that he’d been fired for cause and wouldn’t even get a severance package from the university – more or less nailed shut the casket of the Rebels’ football program for the short term.

In case you haven’t followed this story, you’re missing a Southern Gothic masterpiece in the making.

Essentially, Ole Miss’ boosters and athletic department were tired of being considered the runts of the SEC West in football, and a few years ago they made the decision that whatever it took – whatever it took – they were going to make themselves competitive with the Alabama’s, LSU’s and Auburn’s at the top of the division.

Freeze, whose pre-Ole Miss claim to fame was that he was Michael Oher’s high school football coach in Memphis and was portrayed by Ray McKinnon as the bumbling Coach Cotton in the movie The Blind Side, had come with Oher as an assistant to Ed Orgeron at Ole Miss. From there he’d been an assistant and then head coach at Arkansas State, and he was hired at Ole Miss after Houston Nutt crashed and burned there. Nutt’s final team in 2011 went 2-10; things went so badly for Ole Miss that in a home game against an LSU team which won the SEC and played in the national championship game, the Tigers actually commenced kneeling in victory formation with a full five minutes left in the game rather than continue building on a 52-3 rout.

And Freeze wasted no time in recruiting players no one would have ever thought Ole Miss could get.

Like LaQuon Treadwell, a five-star wide receiver out of Chicago. Why would a black kid from Chicago want to go to college at a place where all the people tailgating are flying confederate flags? Ask Freeze, who can tell you how he pulled Treadwell in. And offensive tackle Laremy Tunsil, a five-star player from Florida. And defensive tackle Robert Nkemdiche, a five-star recruit out of Atlanta.

Freeze made Ole Miss good, quickly, with those improbable recruits. So good in fact that in 2015 the Rebels went to the Sugar Bowl and won. But everywhere else in the SEC all you heard was how flagrant the cheating was in Oxford. Soon the NCAA opened an investigation into the program, and sent a letter notifying Ole Miss of a host of violations that had been alleged – 13 of them, in fact, with nine rising to the dreaded Level 1. Then earlier this year came another letter expanding the list of violations to 21, with 17 of them rising to Level 1.

In the meantime, Tunsil was the source of an almost mind-blowing few days of awkwardness before the 2016 NFL Draft. A video surfaced of him using a bong made out of a gas mask, which was embarrassment enough, but then text messages surfaced between Tunsil and an assistant athletic director at Ole Miss with the subject being Tunsil’s mother’s cable TV and other bills, and the assistant athletic director complaining about them not being the usual rate – a clear implication that the university was providing illicit benefits in a programmatic fashion.

Ole Miss’ reponse to the NCAA essentially attempted to pin the blame for the violations on Nutt – essentially saying that Nutt had run a dirty program but that things were better now. And that resulted in the former coach suing the school for defamation, which is a really, really dangerous thing for a football program engaged in dirty recruiting to have happen to them.

And as it turns out, Nutt’s lawyer uncovered a devastating bit of information in a phone record of Freeze’s – in which the coach had called a Detroit phone number linked to escort services in Florida on his university phone. Within a few days after that revelation, Ole Miss AD Ross Bjork said the university had looked into the rest of Freeze’s phone records and found “more problems” which he wouldn’t identify.

That led to Freeze’s termination yesterday.

Ole Miss will be coached by Matt Luke, the former co-offensive coordinator, on an interim basis this year. Beyond that point it’s hard to say what’s going to happen. The NCAA investigation could be coming to a climax fairly soon and everybody seems to think the sanctions the NCAA will lay down will be devastating.

Ole Miss has already offered to accept a one-year bowl ban for the 2017 season and to forfeit its $7.8 million share of SEC postseason revenues. That isn’t going to be enough to feed the beast scratching at their door. When the NCAA is done with the Rebels – we don’t have a definitive time frame on when this will happen – the final butcher’s bill could include…

Freeze’s plan was to ride out the storm, and there was reason to believe since he had as much dirt on the university as it had on him, the NCAA problems would give him some job security. That was before the implication that he’s been calling hookers – either for himself, or perhaps worse, for players he was recruiting – became front and center. Now his career is more or less kaput, and at least in the short term so likely is Ole Miss’ chance of fielding a competitive team.

Interested in more national news? We've got you covered! See More National News
Previous Article Millennial Writer Releases What Can Be Called A “Snowflake Manifesto”
Next Article CROUERE: For Democrats, There’s No Fool Like An Old Fool