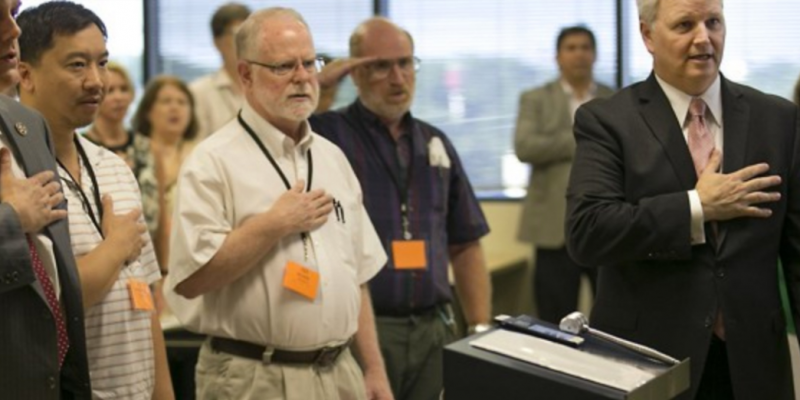 The days of Republicans In Name Only (RINOs) may be numbered with the recent election of James Dickey as Chairman of the Republican Party of Texas. Since taking office, Dickey has sent letters to Governor Abbott, as well as leadership in both chambers addressing the importance of the party’s platform & legislative priorities.

In a fairly solid Republican State like Texas, anger and discontent have grown over the years with conservative legislation being actively stalled or blocked. As most grassroots voters realize, with a near super majority, there shouldn’t be much of a roadblock for advancing the party’s platform. Yet, it occurs far less has been accomplished than many conservatives were hoping for.

There are, of course, explanations for some degree of this. The very essence of a political party is a group of similar ideologies coming together for a common goal, and even similar ideologies can often have competing interests. And yet still, we’ve seen little progress in advancing the party’s legislative priorities, despite dominating both chambers.

Additionally, well known unfavorable Speaker of The Texas House Joe Straus is notorious for making deals with Democrat lawmakers in order to retain his seat and afford him the ability to lose Republican support in the ranks with little consequence.

However, more importantly, is Texas’ open primary. The open primary leaves one little room to win in most areas, though not all, for any party but the Republican ticket. Over the years, this has led to Democrats leaving their party label to run as Republicans. This, of course, leads to liberal Republicans being elected by a vast swath of voters who see the label ‘Republican’ and assume they share the conservative ideology. Furthermore, the party has had little control or even the will to actually force those who run on its label to adhere to the platform.

This has all been changing slowly as grassroots activists have become more and more vocal about their disappointment in results from the State Legislature. First, they added censure to the party platform to rebuke politicians who don’t follow the platform. Next, they pushed the party to go beyond the platform planks to create Legislative Priorities in 2016. These are additional planks, though already in the platform, are a red flag to legislators that the party sees these as important and something should be done ASAP.  Now, James Dickey has come into the Chairmanship with an intent concentration on the very issue all in the party seem to have been sharing for some time. Why can’t conservative legislation come from a Republican-controlled Statehouse?

With these events, the demands seem to have gone into warp drive. The change has moved grassroots groups, Tea Party activists, and many others into action now. They seem to feel they have leadership that finally has their requests in mind to force those elected as Republicans to govern as such or risk losing party support. Letters to leadership in both chambers and Governor Abbott are being sent in daily about missed issues that they feel should have been covered, from civil asset forfeiture to a red light camera ban in Texas.

From the looks of it, RINOs might be on the verge of extinction this coming primary season. This is nothing but good news for both the grassroots and adherence to the party platform.

Chairman Dickey has been quite cordial and professional in his requests the platform priorities be addressed. What will happen if he is ignored by the Legislature? We have a feeling the backlash from new leadership, backed by grassroots support, will look a lot stronger than most RINOs have felt in a long time. This should be fun to watch.