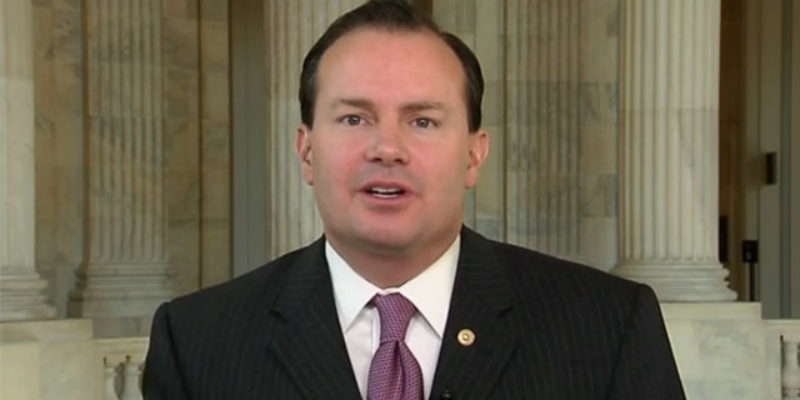 Perhaps it just takes a long while to get these people to do what they should have done from the beginning.

ORIGINAL: Mike Lee and Jerry Moran are going to get blamed for killing Obamacare Lite. Maybe the blame ought to go to the people who drafted a $130 billion bailout for health insurers, who made the bill impossible to stomach for three conservatives who just want to vote to repeal Obamacare first, like President Trump is now asking them to do, and one left-leaning moderate (Susan Collins), who can’t abide the idea of shrinking Medicaid.

A vote to move the bill forward was put on hiatus after John McCain had surgery to remove a blood clot, and Senate leadership was already looking for a 50-50 vote at best, assuming Lee were to support it.

The bill has received criticism from the conservative and moderate wings of the party for various reasons. GOP leadership in both chambers of Congress were looking for a quick passage of the bill to get it to President Donald Trump’s desk.

Health care reform is effectively shelved in Congress now as leadership determines its next move… if there even is one.

Getting a consensus on a bill to make such a major redesign of federal healthcare policy, particularly when to a man the Democrats refuse to engage in a constructive fashion – which is precisely the complaint they levied against Republicans for uniformly opposing Obamacare in the first place, with the moral difference being that Obamacare has never had majority support by the voters in this country – was never going to be easy.

How hard? Here’s how hard…

The Wisconsin Republican was stunned to read in The Washington Post that McConnell was privately arguing that major reforms to Medicaid were so far in the distance that they would never take effect. Johnson said Monday that he’d confirmed through conversations with other senators that McConnell had made the remarks, which he said now puts a procedural vote on the bill in “jeopardy.”

“The reported comments from Leader McConnell before last Thursday about ‘don’t worry about these Medicaid changes, they won’t take effect,’ that’s troubling to me. I have talked to senators that basically confirmed that. I’ll see what Leader McConnell says tomorrow,” Johnson said on Monday evening. “From my standpoint, it’s a pretty serious breach of trust, those comments. I’m just troubled by those comments.”

In response to Johnson’s complaints, McConnell said, “I prefer to speak for myself, and my view is that the Medicaid per capita cap with a responsible growth rate that is sustainable for taxpayers is the most important long-term reform in the bill. That is why it has been in each draft we have released.”

You can’t go to the moderate Republicans and tell them the fiscal discipline in Medicaid advertised in the bill won’t actually materialize while at the same time you’re selling that very discipline to the conservatives. It’s very fair to look at Mitch McConnell at this point and conclude he ought to be finished as the Senate Majority Leader, except that what McConnell is trying to do nobody can really do.

You don’t get majorities for massive pieces of Obamacare Lite legislation with lots of moving parts, because each of those moving parts are going to generate opposition. The porridge is either going to be too hot or too cold for most of the legislature (whether it’s the House or the Senate you’re trying to pass the bill in really doesn’t matter).

What you need is simplicity, and clarity. One individual idea. The Republicans had that idea and ran on it successfully in congressional elections in 2010, 2014 and 2016. Which is a repeal of Obamacare. The beauty of a straight repeal is that it will force the Democrats to participate in what comes next, which is something that attempting to repeal and replace in one fell swoop will not produce.

Have one up-or-down idea at a time and you can govern successfully, assuming those ideas can get a majority.

On that last piece, here’s what I said…

Fourth, remove the obstacles which prevent people from buying health insurance through associations which don’t have to do with employment. In other words, the University of Tennessee Alumni Association ought to be able to offer a group health insurance plan if they want, and so should AAA or the National Association for Gun Rights, or even the Sierra Club. We have a cultural problem in this country in that people don’t join groups as much as they used to; well, this would be one way to incentivize a change in that trend while at the same time provide a mechanism by which more people could find affordable health insurance. As it happens, it used to be quite common for people to get health insurance or something which functioned quite like it through organizations like the Odd Fellows or Moose Lodge or other fraternal organizations; the FDR administration destroyed that with stupid tax policies in the 1930’s and 1940’s which created employer-based health insurance. Let’s bring back what worked.

My theory back in March was that if those four things were put in, an actual repeal of Obamacare might not even be necessary, much less replacing it with Obamacare Lite – because there would be so many market-based holes and niches in the healthcare system for people to find something that works for them, and so much diversity of offerings in the marketplace, that pretty much everybody could find a solution. For one person it might be old-fashioned employer-based insurance; for another, it might be a health savings account they set up at the local credit union backed up with a group catastrophic health policy bought through their membership in the Kiwanis Club. It’s really none of the government’s business.

But at this point, with McConnell trying to drag this leviathan Obamacare Lite bill to the Senate’s finish line and failing to get there, passing a set of fairly simple and modest market reforms and letting those reforms grow like weeds which accelerate the choking-off of Obamacare might not be the political win the GOP wants.

So fine. Do two things on healthcare and then get out of the way. Your results will be a major net improvement in the system and you don’t have to kill yourself trying to craft and pass Obamacare Lite.

1. Repeal Obamacare root and stem, which you’ve already had the votes for in both the House and the Senate. It’s going to collapse anyway – the question is whether it collapses into a single payer system like the Democrats want or a market-based system like the country would prefer. It might be harder to repeal it now with Trump in office, even though he’s apparently going to push for it, because voting to repeal it this time means actually making policy. But so what? All of these people ran on repealing Obamacare. They didn’t run on passing Obamacare Lite. If they don’t have the stones to follow through on those promises none of us should give a damn about their problems.

2. Remove all federal impediments to the creation of association health plans, so that people can readily sign up for group health insurance that isn’t tied to their employer. This was actually the norm in America before stupid wage controls and a 90 percent top tax bracket were instituted during FDR’s interminable presidency and turned health insurance into a common benefit of employment, and in today’s society wherein people frequently bounce from job to job, it’s arbitrary and nonsensical for health insurance to be tied to employment.

This second piece could include the other things I mentioned back in March; namely, the interstate purchasing part and the tax treatment part. As for expanding HSA’s, that ought to be an easy lift on its own – I don’t know how even the Democrats could go against that idea once Obamacare has been repealed, particularly if you’re willing to invest federal grant dollars in staking HSA’s for folks who don’t have the means to do it themselves. They may not want to play a productive role in crafting Obamacare Lite, but that calculus melts away when we enter the post-Obamacare world, and this is a fairly painless measure.

But the point is, the reason the individual market is so problematic is it doesn’t work like the employer-based group market, where the risk for things like pre-existing conditions isn’t spread out among the population. If you’re going to bring the aggregate cost down, you need to allow people to join that group market. So make more groups people are eligible to join. It’s not rocket science.

Why we’re where we are is a puzzlement to me. There isn’t anything magical about the healthcare industry at the end of the day – it’s professional services, like law or accounting or stock brokerage. When the government leaves those service industries alone other than enforcing basic public ethics, they tend to thrive. And that’s what healthcare will do, if we’d just let it.

And stop trying to pass Obamacare Lite when what the market really wants is the end of Obamacare.