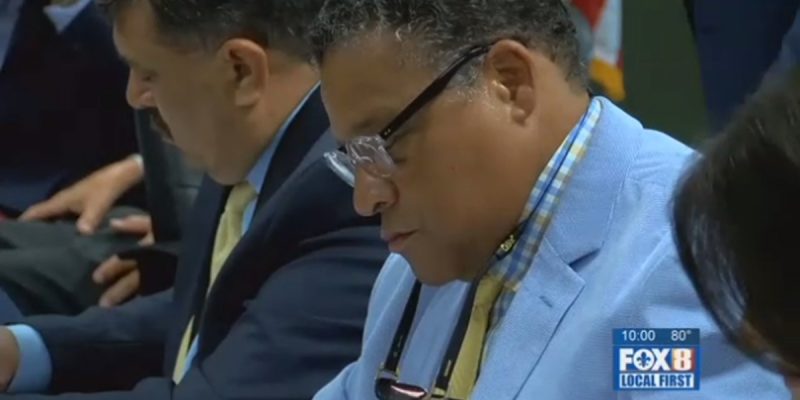 Gov. John Bel Edwards appointed Calvin Braxton to the Louisiana State Police Commission, a body that oversees the conduct of state police and hears appeals for officers’ disciplinary action. It’s a powerful position especially when it comes to the life and career of a Louisiana State Trooper.

According to Fox-8 News, a state trooper arrested Commissioner Braxton’s daughter for driving drunk. Braxton told the arresting trooper’s commander if the trooper that arrested his daughter didn’t help him, Commissioner Braxton might not help the trooper if he gets in a bind on the job and is required to appear before the Louisiana State Police Commission.  And the commander says Braxton also told him he would relocate the trooper that arrested his daughter to New Orleans to quote, “get his mind right.” It’s a clear threat and stunning abuse of power.

The State Troopers Association wanted Braxton charged and fired for the threat last year. The association even sent a follow-up letter last month requesting a hearing and Gov. Edwards has still not responded.

How could Gov. Edwards look the other way when a man he appointed to such a powerful position act in such a way? How he could know about this behavior, a clear crime,  for an entire year and do or say nothing? Gov. Edwards still hasn’t done anything and Braxton still sits on the Louisiana State Police Commission free to continue to abuse his power. I know this is Louisiana and corruption is common but this is ridiculous.

Fox-8 News also uncovered an incident where Commissioner Braxton used his position to get out of a ticket and help friends get out of theirs too. Braxton told a trooper commander that when it comes to State Police Commission members, neither they nor their families are supposed to receive tickets and are not to be touched. Can you believe this guy?

The governor’s office on Monday responded to these new revelations about Braxton fixing tickets with a statement to Fox-8 reading, “Just today, the Governor’s Office was made aware of the existence of emails sent on behalf of Commissioner Braxton regarding traffic citations. The governor will review the new information and determine the next steps.  That said, all public officials must hold themselves to the highest ethics standard. The governor will accept nothing less.”

But Gov. Edwards has accepted Braxton threatening a state trooper for simply doing his job by arresting someone while they drove drunk. He accepted it for 12 months and counting.

Now that Fox-8 has brought this corruption to light Braxton will surely have to resign. Expect that to happen soon if not this week. And Gov. Edwards will have to answer as to why he covered up for his political appointee for an entire year knowing he abused his power in such an open, corrupt, and lawless way.

Hopefully the media will demand an answer from Gov. Edwards and not minimize this scandal just because he is a liberal Democrat. You can bet if Edwards were a conservative Republican we’d be hearing about this story for weeks to come. Credit Fox-8 and Lee Zurik for reporting this in the first place.

I genuinely don’t know which is worse. A commissioner given so much power over the life of a state trooper using that authority to help his drunk driving daughter skirt the law or the governor who knew about for a year and did nothing. To be perfectly honest with you I think they both should resign.

Interested in more news from Louisiana? We've got you covered! See More Louisiana News
Previous Article The Senate Obamacare Lite Bill Has Died. Where To Go From Here?
Next Article BAYHAM: Shifting Dates For Elections And A Missed Democrat Opportunity In 2017