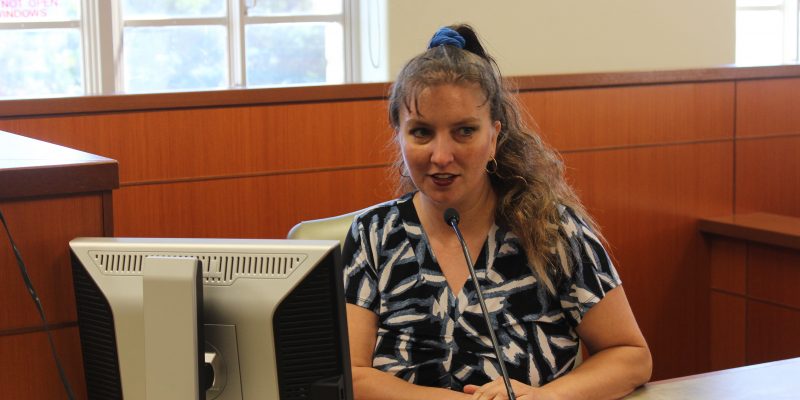 A ruling has been issued on the request for a temporary injunction on Texas State Representative Byron Cook. Judge Lora Livingston of the 261st District Court of Texas has ruled that the chairman can not hinder the plaintiff, Amy Hedtke, from recording or live-streaming committee hearing.

The ruling read, “Absent injunction, Defendants will likely restrict Plaintiff’s abilitiy to record through Facebook Live a public meeting of a committee chaired by Defendant Cook.”

A hearing was held last week to lay out the request for an injunction prohibiting Byron Cook from removing individuals for recording during an open committee hearing. The case originates from last March when pro-life Republican activist Amy Hedtke was forcibly removed from the Texas House of Representatives State Affairs Committee.

“We are very pleased that the court saw through the shallow arguments presented,” said Hedtke’s lawyer, Warren Norred.

“This is the first step to defending the individual’s right to freedom of the press in this government,” Hedtke added concerning the ruling.

The meeting where several pro-life bills were being heard had no official rule on recording and according to the committee clerk no rule was officially adopted, but several signs only allowing the press to record were placed around the room. When the hearing began Chairman Byron Cook repeated the order that no recording was allowed and when Amy Hedtke refused to stop recording claiming her rights under the Open Meetings Act she was picked up and removed from the room and arrested.

There is a lawsuit currently under way against Byron Cook, the Seargent-At-Arms, and the head of the Department of Public Safety.

Since a special session is underway from Governor Greg Abbott a temporary injunction is being sought to enforce Hedtke’s understanding that the Open Meeting Act applies to House Committee Hearings.

“A person in attendance may record all or any part of an open meeting of a governmental body by means of a recorder, video camera, or other means of aural or visual reproduction.”

(A) a board, commission, department, committee, or agency within the executive or legislative branch of state government that is directed by one or more elected or appointed members

Jody Hughes, the Assitant Attorney General defending Byron Cook claimed that the House was allowed to create their own rules about committee meetings and broadcasting. She claimed that since Amy Hedtke was live-streaming and not simply recording the meeting then the broadcast was not protected under the Open Meetings Act.

The judge seemed concerned that no official rules were clear or voted by the committee and that they seemed to be enforced ad hoc at the whim of the committee chair. The judge’s concerns seemed to be justified by the fact that Hughes claimed that no signs refusing the right record had been placed at the House State Affairs committee meeting that occurred just hours before the Injunction hearing, Chaired by the Defendant.”

While Hughes attempted to make the case about live-streaming instead of recording, it was ‘recording’ that was stated to not be allowed in the committee. The officers that forcibly pulled her from the room repeatedly claimed her removal was due to her refusal to stop recording.

Another argument of Hughes was that the committee was discussing emotional issues and recording could be seen as intimidation. This argument seemed to fall flat as well since the committee was allowing credentialed press and there was an official House live-stream occurring at that meeting.

Hughes also attempted to cite a case from 2000 where the Texas Senate voted in secret for which lieutenant governor would replace Rick Perry when he ascended to the governorship following the election of then Governor George W. Bush to the presidency. What Hughes seemed to fail to note was that Judge Livingston was the presiding judge that was overturned in that Supreme Court case.

Judge Livingston joked, “I was having a good day up until that.” Hughes apologized to the judge for the oversight. The judge appeared to still disagree with being overruled.

The judge issued the following ruling to be in effect until October 16, 2017.

It is therefore ordered that Defendants, their officers, agents, servants, employees, and attorney, and those persons in active concert or participation with them who receive actual notice of the order by personal service or otherwise, are enjoined from preventing or unreasonably impairing Plaintiff from recording, including through Facebook Live, open meetings of any committee of the Texas Legislature chaired by Defendant Cook.

A civil case will be going forward against Byron Cook and other defendants. Norred Law is handling it as a “white hat” case and an online fundraiser is under way to cover expenses.

Interested in more news from Texas? We've got you covered! See More Texas News
Previous Article WAGUESPACK: Louisiana Needs To Stay The Course With John White
Next Article Why 2018 Won’t Be The Tidal Wave Democrats Are Hoping For