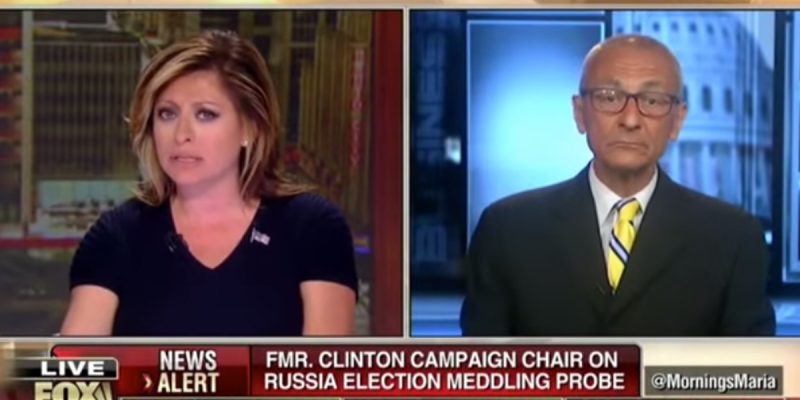 In case you didn’t see this when it aired on TV on Thursday, you’re in for a treat. If anything, it’s somewhat surprising that Podesta allowed himself to be booked on the Fox Business Channel to take the evisceration a solid, no-nonsense reporter like Bartiromo, who’s spent a career smoking out lies from people in the financial world, could give to him.

And thanks to that mistake, what results resembles a vertically-integrated Fourth of July barbecue – Podesta is led to the slaughterhouse, cut to pieces, marinated, put on the grill and served on a plate in about 10 minutes of video in which Bartiromo sweeps away one lie after another he tells about the connections the Democrats – and himself personally – have to the Russians they’ve alleged “hacked” the election as a result of supposed collusion with the Trump campaign.

That is, of course, a lie Podesta and the Democrats have milked for well more than six months in an attempt to distract people from the fact that Americans not from California delivered a stunning rebuke to their party and their candidate. The Trump And The Russians narrative has fallen apart in recent weeks and they’re not talking much about it anymore – mostly because the examination of it they’ve invited is starting to generate the kind of blowback Bartiromo delivered to Podesta.

A prediction: whoever in the Clinton campaign cooked this stuff up in the first place, and that might very well have been Podesta himself, as he’s responsible for as many or more bad political ideas as anyone in America since Eugene Debs died, will come to regret it. Before it’s all said and done the Trump And The Russians narrative will go down as the political analog for New Coke – part of the reason being that blowback. It wasn’t Trump, after all, who came up with the idea to sell the uranium to Putin.

And people in glass houses that fragile ought to know not to throw stones. Particularly people like Podesta, who doesn’t exactly possess the charisma of his old boss Bill Clinton or even his newer boss Barack Obama.

Interested in more national news? We've got you covered! See More National News
Previous Article Hayride Texas Is Coming On The Fourth Of July
Next Article What You Missed While The World Obsessed Over Trump’s Tweets