I said this on Facebook earlier tonight, but what we appear to have in Baton Rouge is a race of sorts where mayor-president Sharon Weston Broome is concerned. One of two things looks possible for the future of the mayor and the city’s politics.

The first possibility, the one I have assumed was the case all along, was that Broome’s policies and political stances would accelerate the flight of middle-class families from East Baton Rouge Parish to such a pace that even by 2020 when she comes up for re-election the demographics of East Baton Rouge will have been altered such that no candidate who departs from a left-wing, redistributionist social justice warrior agenda could possibly win. This is of a piece with the theory I’ve called “weaponized governmental failure,” wherein bad policies which drive away middle class voters (who are not just white, by the way; the black middle class is perfectly capable of getting the hell out of Dodge, too) actually inure to the benefit of the leftist politicians who cause that exodus; what is left when it happens is usually a small group of very rich people who are able to buy influence with a corrupt governing elite and thus insulate themselves from that governmental failure, and a large group of very poor people who are dependent on that governing elite and incapable of rejecting the pathetic sustenance they’re given in return for something better.

What results is a ruin, but the implementers of that ruin get to rule over it without accountability in the form of a viable opposition party capable of winning an election against them. Broome’s agenda of robbing East Baton Rouge’s taxpayers to “make it rain” on her old constituents in North Baton Rouge with a series of ill-conceived and highly corrupt initiatives, combined with her never-ending stoking of the racial fires in town, constitute a case study in weaponized governmental failure designed to chase away the voters who might mobilize to beat her with a Republican, or even centrist Democrat, 2020 opponent.

So that was my assumption for the future of Baton Rouge – an accelerating demographic shift which detaches East Baton Rouge from the political mainstream beginning in 2020, and from there a one-way ticket to becoming a Detroit, Baltimore or Jackson. Dead city walking after three terms of Sharon Weston Broome, and who knows? Maybe a Gary Chambers or Silky Slim Reed could end up a viable mayoral candidate by 2028 when Broome is termed out. And the only possible avoidance of this fate would be a St. George incorporation leading to the new city becoming a population dynamo that makes for a potential reversal of the demographic trend in the parish.

I still think that’s probably where we’re headed and that’s one reason I think St. George has to, and will, happen. But I do have to admit, watching the absolute fiasco of the Silky Slim fallout today has opened my eyes to a different possibility – namely, that Broome is going to lose the race.

Rather than employ weaponized governmental failure to drive out dissenting voters and create a one-party city-parish, the possibility exists that Broome’s incompetence and inarticulate bumbling in front of the media might turn her into a political pariah in Baton Rouge before the opposite side’s political base picks up and leaves town in force. That she might make herself so weak as to be vulnerable to a centrist Democrat or even a Republican in 2020.

This still seems to be a long shot, mind you, but it can’t be completely discounted. Here was WAFB’s report on Broome and the Silky Slim mess from tonight’s 6:00 news…

At issue is the BRAVE contract between Broome’s administration and Reed, which Broome is now saying she had no idea existed until this week. It’s a decent bet this is a lie, seeing as though Reed has palled around with Broome a good bit and was put on her police advisory board, not to mention doing public appearances with her. She would know if she was doing business with him; her statement stinks. So you’ll forgive me for thinking it’s a matter of time before evidence surfaces that she was lying and had known about Reed’s contract from the start.

But the big issue is the Baton Rouge Police Union already dropping the bomb on Broome and demanding her resignation. For Sgt. Bryan Taylor to take that step barely six months into Broome’s term is breathtaking stuff; Taylor knows that’s a crossing of the Rubicon and something he can’t really take back. He’s now going to have to back it with action of some sort – a strike comes to mind, but what’s more likely is an increasing step-up of anti-Broome rhetoric that will be exceptionally toxic to her politically. It could be fatal to her efforts to find a new police chief to replace Carl Dabadie, whom she finally was able to run off this week. Broome’s chief administrative officer James Llorens raised eyebrows this week when he offered a three-to-six month timetable on a new hire, which left critics incredulous; after all, replacing Dabadie was her most vocal priority. How on earth could she not have a list of favored candidates in mind?

Taylor’s no-confidence vote might not even be the cruelest blow to Broome’s efforts to find a new police chief. The International Union of Police Associations laid down this incendiary bomb on Broome today as well… 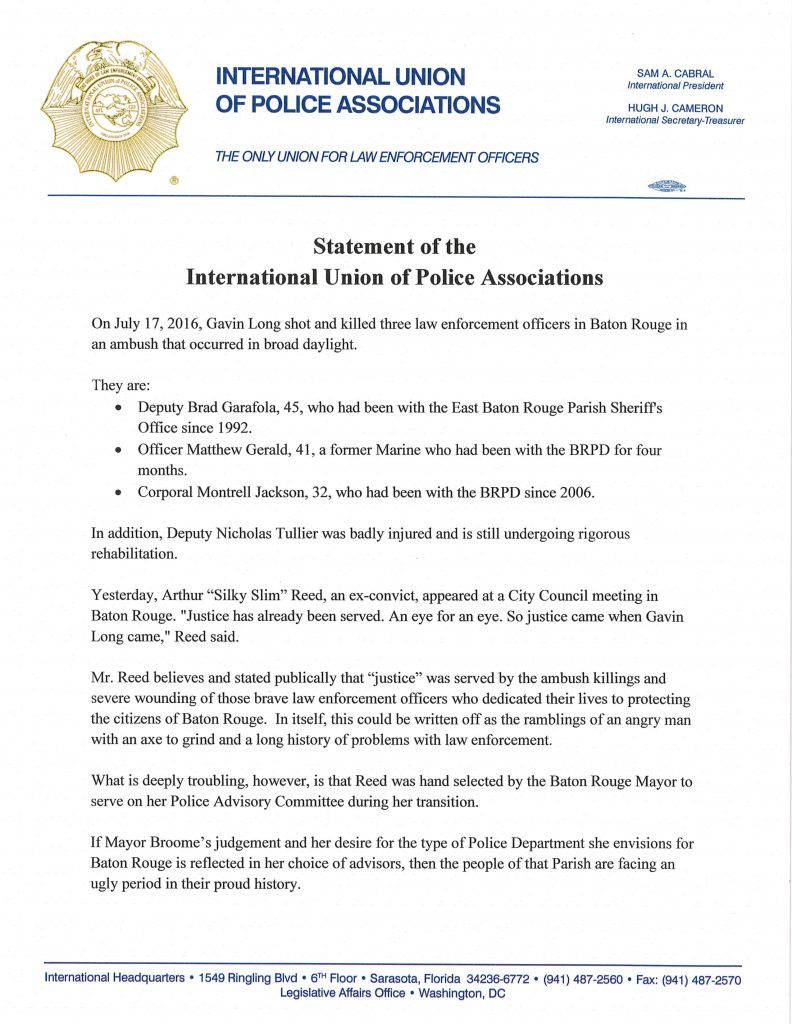 Every prospective police chief in the country will see that as part of their research into the job, and you can bet most if not all of the worthwhile ones will want no part of Baton Rouge. That might well mean Broome will only get applicants she likes: docile yes-men who will seek to be peacemakers between the cops and the “community leaders” in high-crime areas, meaning the Silky Slims of the world, and produce the result of an out-of-control, lawless city. If there’s another way for this to shake out, I can’t see it.

And so we’re going to have a mess of a police chief hire, on top of the ongoing mess of a chief administrative officer hire, which she’s already botched once and will have to attempt to do again, and on top of the fact she still doesn’t have an emergency preparedness chief and we’re in the middle of hurricane season. Now the media organs in the metro area smell blood. If WAFB and WBRZ get into a competition of who can expose more corruption and stupidity in Broome’s administration on the 6:00 news every night, it might even arouse the curiosity of the Advocate, and then there could be the kind of accountability here that (1) the voters have a right to expect and (2) Sharon Weston Broome has zero ability to satisfy with results.

So we’ll see. If nothing else, the race, which I’ll confess I wouldn’t have expected, is now on.