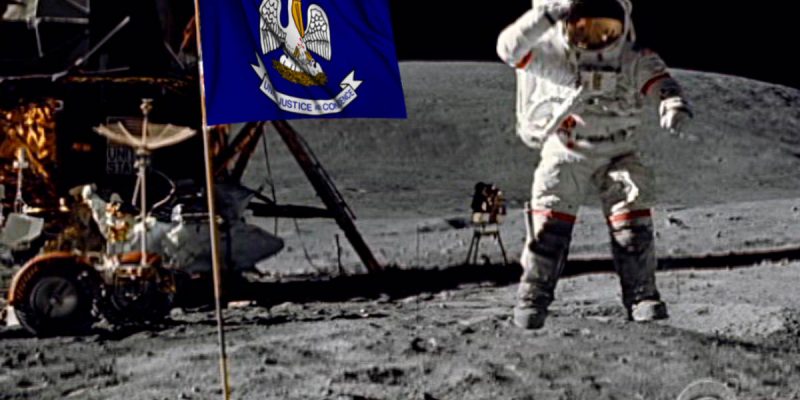 As a boy I remember President John F. Kennedy challenging America to reach the moon in ten years. History has shown that he actually was trying to divert attention from other political failings but never the less his challenge was taken up and became the driving force behind the American psyche for decades. His words were bold:

It should be as no surprise that this emotional appeal to the greatness of America worked. Not only did we reach the moon but the benefits from that effort have blessed our nation for the nearly sixty years since.

There have been many times in American history when great leaders created such an image, truly a vision, and our people willingly dropped all pretense of division amongst ourselves and lined up behind these leaders; Franklin D. Roosevelt declaring war on Japan, Ronald Reagan standing up to the communist Soviet Union, Teddy Roosevelt and Manifest Destiny. Our history is rife with great heroes who had the courage to stand up for a vision that may not be popular in current politically-correct revisionist history but that, in the end, raised up all Americans and made us truly a great nation.

In the history of our state we have had a few, a very few, leaders that have demonstrated a vision that has empowered them to lead our people. Certainly one could say that Andrew Jackson and Huey Long were two such leaders. Andrew Jackson’s vision was one of a bold new democratic nation and through his vision he led a rag-tag group of volunteers against the strongest army in the world at Chalmette. Those people dropped all pretenses of differences in race or class and stood shoulder to shoulder behind a man who through his own inner compass convinced them that they could prevail and that what they were willing to die for was of great value.

Huey Long was a different kind of such leader. Though history has shown that he was a terribly corrupt individual, he had that innate characteristic that makes a person stand out. His was a message crafted to fit his times; a message that offered something that ordinary people had no way of achieving on their own. Through that message the citizens of Louisiana were willing to overlook his moral failings and to grant him their allegiance. Sadly the ghost of his character and message prevails to this day and the philosophy that elevated him has brought great suffering to the very people that believed and still believe in him. Nevertheless, though it was logic whose value was based in the early 20th century not the 21st century, by my definition he clearly was a visionary.

Well enough history, how does this all play out in our domain? The answer lies in the fact that we in our state always seem to elect people who are very personable or who tell us what we want to hear or who promise us all kinds of free stuff or, in the worst case, whose turn it is. In my lifetime I cannot recall when we ever elected someone to an executive leadership position, be it at the state or local level, because they offered a tangible vision of making ours a better state, parish, or city. Of course by this I am defining vision as a series of goals that fundamentally and positively change the lives of our citizens, along with a strategy to achieve those goals.

Maybe modern politics precludes such leadership. I suppose that today our candidates for leadership must believe that they have to be overtly politically correct, that they can’t offend anyone, and that they can’t even hint that they would be willing to change things even if those things are known to be at the heart of the failure of our institutions. It seems that they are afraid to step out with a new vision because it might upset one subset or another. And everyone knows that a politician doesn’t dare suggest that some of that free stuff be ended, even if there is a better way of doing what was originally intended. Maybe the concept of vision is dead in political circles. If so we are losing so much and our future seems murky indeed.

Interestingly, I read just this week and for the first time an actual vision for fundamental change at the state level. Ironically it didn’t come from our senior political leadership; it came from Stephen Waguespack, CEO of LABI. Mr. Waguespack undertook a plan to solve the fiscal problems of Louisiana not from a political perspective but from a good-government angle. He looked at the problem from all directions and suggested some bold steps, steps that violate the very safe place in which politicians seem to want to hide.

Whether we all like his proposals or not at least he set forth what could be called a true vision. Sadly, though he is the leader of the state’s major business organization, he cannot do anything except prod politicians to actually move his vision forward. Truly a viable vision must emanate from the administration or a collection of legislative members.

Louisiana cannot unbridle itself from the effects of decades of bad government as long as we do not have leadership that is capable of or willing, if not necessarily to put a man on the moon, at least to create for the people a meaningful image of a better world, an image that the majority will accept and follow. That is vision; something that we haven’t had for a very long time and that we are paying the price for not having!

Interested in more news from Louisiana? We've got you covered! See More Louisiana News
Previous Article It’s Likely The LSU-BYU Game Will Be Played In The Superdome, But Here Are The Five Options…
Next Article FAGAN: Times-Picayune Columnist Jarvis DeBerry Sinks To A New Low