The New Orleans Inspector General job was opened up to candidates, but the city seems to be very coy about advertising it.  Rumors began months ago, before Mitch began tearing down monuments while funneling money through a private-non-profit, that Inspector General Ed Quatrevaux was being forced out.

Quatrevaux has been the Inspector General since 2009, before Landrieu took office.  The reason for Quatrevaux’s implied departure is not known, at this point it’s only speculation.

Maybe the Mitchtator–Dictator of New Orleans, master manipulator, career politician, city flooder–may have had his hands on this one.  A Hayride source says “the current Inspector General is not well-liked inside the City, and his job security is tenuous.”

The IG has come a long way since Robert Cerasoli was working out of a spare office on Loyola’s campus.  Guaranteed 3/4 of one percent of the City Government’s budget, the office is supposed to be independent of political influence, at least for its financing.  Cerasoli grew the OIG in his 17 months, and it has continued to evolve and grow and is now around 20 employees.

But it appears the OIG may have a significant clearing as the NOLA.gov website lists nine openings.  Still, it does not show the main IG position held by Quatrevaux.  Based on the Louisiana Works website, the search has been farmed out to a Georgia-based headhunter, yet it is not listed on that company’s list of open recruitments. Here are two screen shots from the Louisiana Works job-search website taken over the weekend. 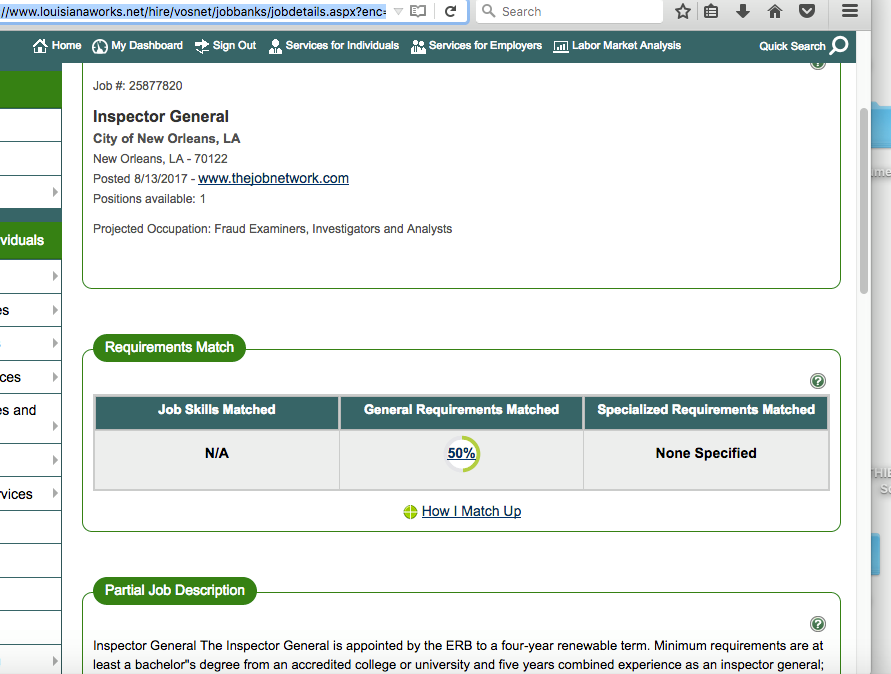 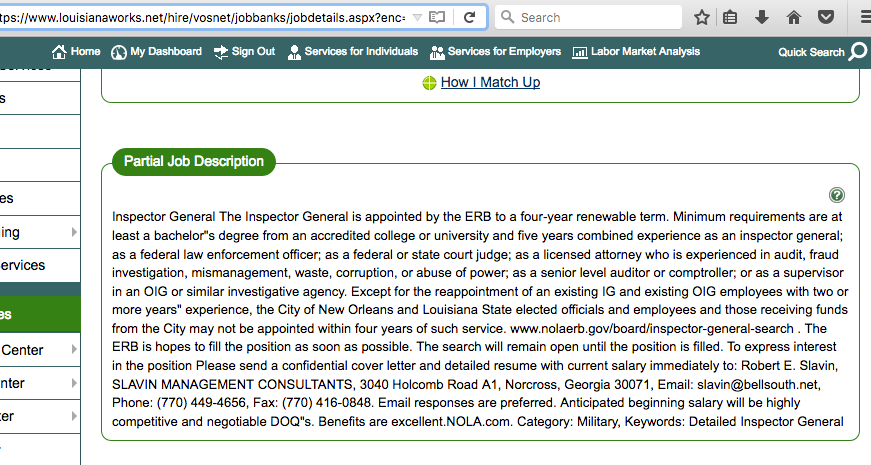 And here’s a listing for the position courtesy of Google. It almost looks as if they’re trying to hide the position from potential applicants.

The New Orleans OIG’s website says it is “responsible for eliminating corruption, fraud, and abuse, and holding government officials accountable for efficient and cost-effective government.”

The IG position was created in 2007.  Set up as an independent body to investigate government, it has been awkwardly quiet for 2017.

The OIG released 17 reports in 2016 and only four in 2017 to date.  The first report was about the OIG’s savings to the city.  Then one about vehicle insurance, then two on the S&WB–lead in tap water and employees stealing brass.

During the time the IG released a mere four reports, Mayor Mitch Landrieu has lied about the use of public money and monument removals, later admitting $1 million in taxpayer money was used.  And that the monument removal costs would be absorbed through a number of different budgets.  Landrieu also used S&WB employees and NOFD employees, including Superintendent Tim McConnell to actually remove the historic landmarks.  Also, Mitch’s cousin Renee Landrieu has a DBE concrete company, indiscreetly named Landrieu Concrete & Cement Industries, that has been working high profile jobs around town this summer such as City Park, Bourbon Street, and St. Charles Avenue, while being rumored to have worked on the New Orleans East Hospital a few years back and the current MSY airport expansion.

The secrecy within New Orleans’ government rolls on, with residents kept in the dark.  The Landrieu administration lacks transparency.  And now what amounts to a third party government investigator has been silenced and may or may not be out of a job.  Perhaps now that Mitch Landrieu is taking responsibility he can enlighten the taxpayers as to what is happening with the Inspector General.  But wait, the Mitchtator shouldn’t have a hand in the Office of Inspector General.