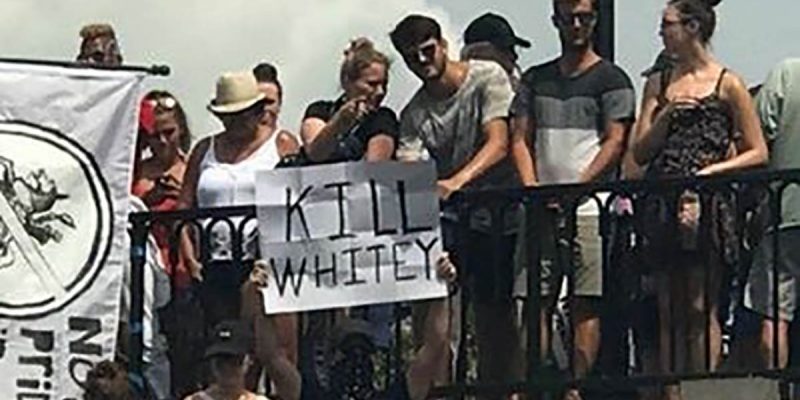 Take Em Down NOLA’s rally on Saturday drew large crowds, and an extremely heavy police presence. The organizers of the publicized rally did not file a permit for the event. They paid no fees. And Mitch Landrieu dedicated significant numbers of NOPD. The number of personnel and an overall salary request have been submitted.

Interestingly the mayor who is soft on crime and often bends the rules said back in May the monument removals were about “enforcing the law of the land.” Yet the law of the land regarding a public march is: “any person desiring to stage, present or conduct a parade, motorcade, procession, march or any other planned movement of persons on the streets of the city shall first secure from the department of finance a permit to engage in such activity.” French Quarter street closure costs for a non profit, which Take Em Down is not, are $615 per block.  Take Em Down paid no such fees.

The banners under which people marched were Take Em Down, The Peoples’ Assembly, New Orleans Democratic Socialists of America, and Black Lives Matter.  It was a socialist, anarchist uprising.

The rally parroted the same old chants, with the addition of a new one claiming Mitch only listens to the rich. Despite the broken-record chants, the group was undeniably large and about 95% white. A guess on the number of natives of Greater New Orleans in attendance was about 10%.

Malcolm Suber recently said Andrew Jackson must come down because “it’s the most prominent Confederate monument left standing and the most popular among white supremacists, and if we can get that taken down the others will probably follow in order.”  A WDSU reporter said during the events Saturday that Jackson was a Confederate General. Jackson died in 1845, 16 years before the war broke out.  The truth is it doesn’t matter to these people, they’ll find a reason to dislike something or make up a reason and blindly commit to it.

They chanted “No Trump, no KKK, no racist USA!”

No KKK, that’s right. The KKK isn’t walking the streets of New Orleans. Or much of anywhere in the South. Listening to the media, who consistently give these liberal snowflakes a platform, it sounds like the KKK is stronger than ever.

This movement to remove statues is the physical stage of white guilt. It began as emotions. White people embarrassed over past history. Now, they’re trying to cleanse their fragile minds by stripping away any and all symbols of American-European heritage. White guilt evovled into “Virtue Signalling.”  That’s the expressing moral values primarily with the intent of enhancing standing within a social group, in this case the black community.  For example, a white woman showed off a sign that said, “White Silence is Violence” amid a sea of vocal white people.  This an outward attempt to compensate for personal insecurity.

And the cultural genocide perpetuated by the virtue signalers involves decisions that only target white people. The neighborhood of Treme was named for Claude Treme, a slave owner who killed a slave. The neighborhood is predominantly black and has been for a long time. A Street is named for Treme. If these white guiltists truly had a standard they would be calling for the Treme name to be changed–but they will not.

A white man with a hat on and bandana over his face held a sign that said “Kill Whitey.”  Mitch’s claim of enforcing the law of the land is further mocked by this.  And by statements Malcolm Suber made that they will go outside the law to remove the monuments they dislike.

“Just as they did in North Carolina, we will find a way to come and take them down ourselves,” Suber said.  The “law and order” mayor has ignored more than two years of vandalism to public landmarks, even when video evidence showed Suber and other Take Em Down NOLA anarchists spray painting and defacing monuments.

This was not a friendly, supportive rally and it certainly is not a tolerant group.  It’s hate and communism disguised as peace.  It’s an attempt at a moral cleansing for those with white guilt, it’s virtue signalling, it’s an attack on American history and it has no end.

Now that the Andrew Jackson equestrian monument has become a site of controversial gathering, will the City of New Orleans apply the nuisance law to the Jackson monument?