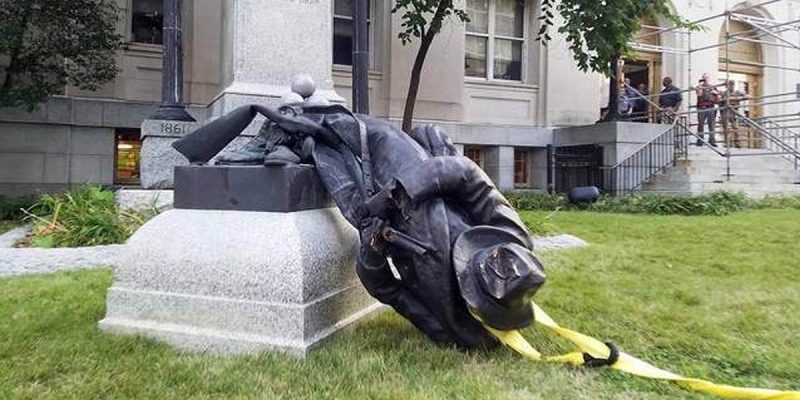 For over a century, monuments to these two Confederate heroes and others who were connected with Dixie stood across the South.

While their contemporaries were alive, these monuments served as places for commemorations for those who fought in America’s bloodiest war, visited by both those who wore gray and blue.  As the Civil War generation died out, they became landscape, points of interest along a town’s footprint.  With the exception of infrequent wreath layings by the Son and Daughters of the Confederacy, few people, black or white, paid any mind or attention to these statues.

They were erected by the citizens of communities who wished to honor the men who were their heroes, even if they were on the losing side of a war that laid waste to a region and resulted in the installation of the nation’s most corrupt state governments until the rise of Huey Long.

The memorials reflect not just the subject but their sponsors, a witness to a society that would disappear.

But after 150 plus years, the imagery of Lee and Davis changed in public interpretation practically overnight.

Lee became a 19th century version of Benedict Arnold while Davis was transmogrified into the Adolf Hitler of the South, with their statues declared monuments to white supremacy.

Funny how Dwight Eisenhower, a career army man who led the western assault on Nazi Germany never thought that and kept a photo of the famed and now defamed general in his office.

And I suppose the legion of black mayors who presided over cities dotted with Confederate monuments somehow overlooked these overt marble and bronze edifices to racism.

It took a rash of retweeted pithy memes for a century and a half worth of scales to fall from America’s eyes.

Of course we now live in an age where co-ed rabble rousers chanting profanities compare themselves to the brave men who stormed the beaches of Normandy.

How can people who don’t understand themselves (at what point does a boy know he is a boy and not really a girl?) be expected to understand history?

The narrative against the Confederate statues has been 1) they honor men who betrayed their country (though they have no problem with antifas burning the US flag at their CSA protests) and 2) they were racists, as if the Union army was devoid of people lacking of any sense of prejudice.

Under the cover of darkness, the city of Baltimore removed three statues honoring the Confederacy.

They also plucked away a statue of someone who was not in the Confederacy and had sworn in Abraham Lincoln into his first presidential term.

Roger Taney served as Supreme Court chief justice for twenty-eight years.  Prior to that he served as Andrew Jackson’s attorney general and treasury secretary.  The Maryland native was also the first Roman Catholic to preside over a branch of the US government.

However Taney is best known in history for writing the court’s majority opinion in the Dred Scott case, the most controversial ruling made by the US Supreme Court until Roe v Wade further redefined what a person truly is.

Taney and six of his associate justices ruled that Scott had no standing to file suit because his race precluded him from US citizenship.  The ruling also destroyed the fragile Missouri Compromise that had kept an unsteady peace between the north and the south by essentially dividing the country into free states and slave states.

While Maryland was sympathetic to the South and was retained in the union by military force, Taney remained on the federal court and died in office in 1864.  Taney was not a Confederate but his statue was hauled away with the monuments honoring the heroes of the Confederacy.

Though Taney is not a very sympathetic figure by modern standards (and wasn’t held in high esteem by many of his peers), the removal of his monument marks a shift in the bowdlerization, from targeting the “traitors” to the unpopular.

As the remaining Confederates get mopped up by politicians yearning for national adulation and demonstrating their “righteousness,” a new front has opened on the war against history.

As the non-Confederate Taney was taken down due to his connection to slavery; will monuments dedicated to our Founding Fathers, many of whom were actual slave owners, also receive one way trips to the scrapyard?

The Taney precedent is mile marker one on the road to Monticello and Mount Vernon and the cultural Marxists are behind the wheel. It’s not a coincidence that every time a single Confederate statue went down, the list of new villains to expunge grows by two.

Historical figures will now be put on trial by the leftist, partisan media, with self-serving politicians serving as the jury, and Antifa mobs volunteering as the executioners, even before the verdict is read, as was the case in Durham, North Carolina.

The Civil War ended at Appomattox Court House; the leftist media and activist blitzkrieg on American History is just beginning.