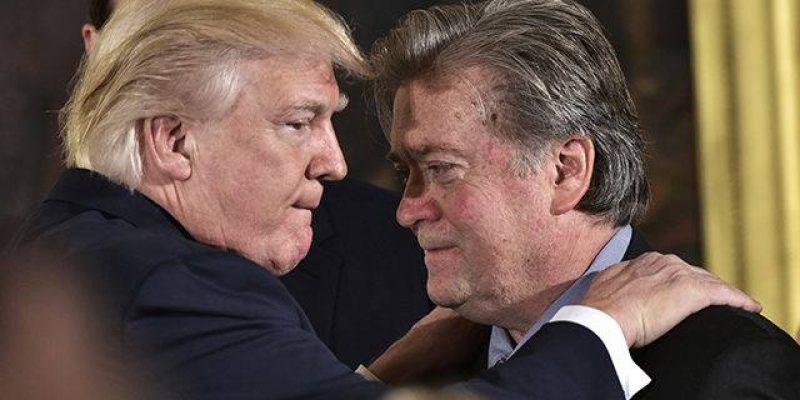 According to Press Secretary Sarah Huckabee Sanders, today is the last day for Steve Bannon at the Trump White House.

“Chief of Staff John Kelly and Steve Bannon have mutually agreed today would be Steve’s last day. We are grateful for his service and wish him the best,”  Sanders said in a statement.

Bannon has been on the outs with Trump for numerous reasons. Whether it was his grandstanding, countering Pres. Trump on North Korea, White House leaks, or his association with the alt-right that finally did him in it is unclear.

According to Axios, a senior White House Official says that Bannon has been setting himself up as a martyr for the alt-right. He may plan to play this as being kicked out by “globalist” forces inside the White House. He could return to his “killing machine” at Breitbart.

In recent days Bannon seemed to be making out of character moves as his final days seemed imminent. Steve Bannon, who notoriously never does interviews, told a reporter concerning North Korea:

“Until somebody solves the part of the equation that shows me that 10 million people in Seoul don’t die in the first 30 minutes from conventional weapons, I don’t know what you’re talking about, there’s no military solution here, they got us.”

On Tuesday, Pres. Trump would not say specifically what Bannon’s future held, but defended him as “not a racist” and saying he was “a friend.”

An ominous warning, signaling back to the old cry of Andrew Breitbart, has already come from one Breitbart editor who simply posted #WAR.

Steve Bannon joins a growing list of White House officials and staff that have resigned or been forced out in the eight-month administration including:

Attorney General Jeff Sessions has also been on the outs with Pres. Trump, but should time come for him to leave it is more likely Sessions will be moved to a different position rather than ejected from the administration.