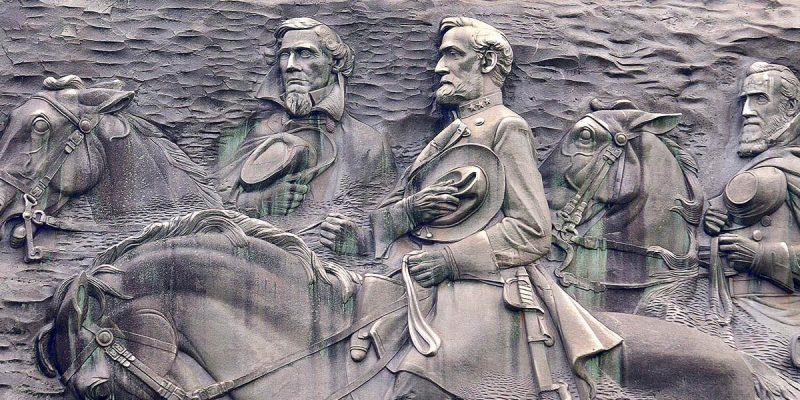 If Americans haven’t already figured it out, they got played big time by the media and the Democrats over Civil War monuments and other symbols from history nobody paid any mind to previously.

Initially focused on those “treasonous” Confederates who – from their perspective – dared defend their states, homes, and families during the Civil War, the campaign to Stalinize American history through revision and eradication has expanded to presidents other than Jefferson Davis and their monuments on both sides of the Mason-Dixon line.

Even theme parks were not spared this recent outbreak of cultural Marxism, as Six Flags, named for the banners of the nations that flew over Texas, succumbed to the national media’s squatting/bullying.

Six Flags got trimmed down to one flag on six poles, ditching the colonial Spanish, Bourbon French, modern Mexican, Lone Star, and the targeted Confederate “Stars and Bars” flags.

The more radical the position, the longer the soundbite.

Fringe politicians, seeking to gain standing in the public, have exploited the controversy by proposing ludicrous measures like sandblasting Robert E. Lee, Jefferson Davis, and “Stonewall” Jackson off Stone Mountain in Georgia.

I didn’t get that memo when my family brought me there on a trip to Atlanta in the early 1980s; and apparently neither did the two black guys I shared a gondola ride to its top on my last visit there ten years ago.

New Orleans, at the prompting of a musician who moved out of the city years ago, has hauled away four Civil War era memorials but that’s not enough for the likes of communist adjunct professor (at Southern University’s New Orleans campus) Malcolm Suber and his collection of racialists and left wingers.

After the city denuded the landscape of three aesthetically attractive statues and an obscure obelisk, Take ‘Em Down Nola wants more taken down, from granite markers to street signs.

Their main focus is now the equestrian statue of Andrew Jackson, the city’s preeminent landmark.

Mayor Mitch Landrieu drew a line on that one yet I suspect the city is only another pandering mayor away from Old Hickory’s removal.

Baltimore has challenged the Crescent City’s bid for the distinction of the country’s leading history bonfire, as both cities have literally treated their heritage as “surplus property”.

Where the local government has proven slow or unambitious in the bowdlerization scope, the AntiFa thugs took matters into their own hands and sledge hammer, smashing ISIS-style America’s oldest memorial to Christopher Columbus.

The Italian explorer being the greatest villain in the twisted minds of racialists and leftist radicals, for triggering centuries of colonization in the New World.

The criminals brazenly filmed and posted their destruction of the Columbus monument.  These were the individuals referenced by President Trump in his hacked up and misreported Trump Tower press conference when he criticized both sides in the Charlottesville protests.

Columbus isn’t the only Italian in the Left’s crosshairs.

Philadelphia Mayor Frank Rizzo’s statue and mural have been picketed by protestors demanding their removal and like Columbus have been vandalized.

Let’s hope the south Philly mural to the Three Stooges’ Larry Fine escapes AntiFa’s wrath lest they discover the wild haired stooge may have been a Zionist.

Never one to be outdone in political lunacy, New York has been on their own bowdlerization binge, hunting for any plaque, bust, or honorable mention of any Confederate general.  The city subway operator recently announced that they would be “altering” a tile design along the walls at the Times Square station that too closely resembles the Confederate battle flag.

And then there was Vice’s column entertaining the idea of demolishing the presidential faces off Mount Rushmore, one of the planet’s largest and most impressive works of art.

Bombast and leftist radical views have become virtues in a society driven by a media and entertainment industry that is 95% left of center.

Perhaps the jokers at Vice weren’t serious, but injecting such a ridiculous idea into the already strained discourse on the subject might be great for clicks and attention, but it’s not contributing towards rational debate.

America and history are learning the hard way that the progressives never ever stop progressing as the bowdlerizers keep finding new things to bowdlerize. It’s coming at a time when, as evidenced by Trump’s election, the public is exhausted by the never-ending cultural aggressions of the Left.