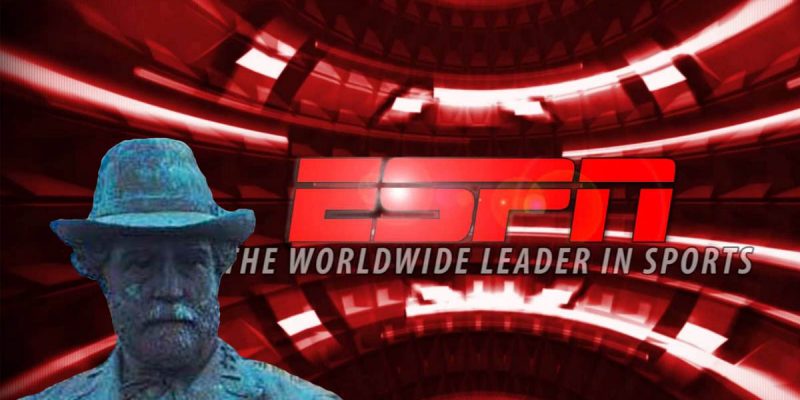 Per Clay Travis at Outkick The Coverage, who never misses an opportunity to trash ESPN (Travis has taken to calling it MSESPN) for the sports network’s never-ending leftist proselytizing, something virtually unthinkable just happened – namely, that ESPN has pulled an announcer off its Sept. 2 telecast of the William & Mary-University of Virginia game because of his name.

It gets much dumber.

Did I mention that Robert Lee is Asian?

Is this even real life anymore? This might even be worse than MSESPN apologizing for the fantasy football slave draft a couple of weeks ago.

To avoid offending left wing idiots Robert Lee, the Asian college football announcer, not the Confederate General who died in 1870 and shares a name with him, was switched to the Youngstown State at Pittsburgh game and Dave Weekley will now call the William and Mary at University of Virginia game.

Unless someone tries to take down Dave Weekley statues between now and kickoff.

There are, as it happens, lots of people of East Asian descent who have the last name Lee. Many of them living in America have first names common to this country. Robert happens to be such a name.

Ergo, Robert Lee can be someone completely different in the 21st century from the Robert Lee who graved Civil War battlefields in the 19th century.

Today’s interesting developments might cast a long shadow over the future career of Robert “Bob” Ley, who has been an announcer for ESPN virtually since its inception and currently hosts its Saturday morning show “Outside the Lines,” with usual fare like racism in sports, NFL concussions, sexual assault by college athletes and other nagging social questions peripheral to the sports people watch ESPN for. Ley never attempted to become Keith Olbermann, which is a good thing for his career; he apparently never had to. But given today’s developments it’s hard to see how ESPN will allow someone whose name is so similar to a Civil War figure who triggers snowflake leftists from the grave to continue on its air.

Stay tuned for more idiocy. After all, college football season is only nine days away and ESPN has had all summer to consider new ways to drive viewers away from its signature product.

UPDATE: We were wrong.

THIS is Peak Stupid. ESPN hadn’t even begun to fight.

ESPN's statement on Robert Lee no longer calling the game between #UVa and W&M pic.twitter.com/jxg2Oeed8g

One wonders if it had ever occurred to the clowns running that network that no one – no one – would mistake their announcer for a confederate general who died 147 years ago, and that by pulling him they actually brought a lot more attention to the subject than would have been had otherwise.

ESPN is the worst-run company in American media, which is saying something.

Interested in more national news? We've got you covered! See More National News
Previous Article APPEL: Gambit Is Asking If New Orleans Is Worth It, And It’s A Darn Good Question
Next Article BAYHAM: The Stalinization Of American History Goes National