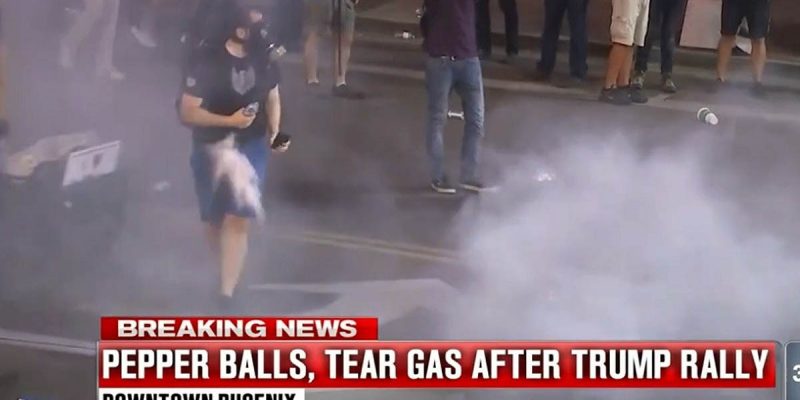 If you haven’t seen this elsewhere yet, you’re destined to – because it’s now everywhere. It’s footage from the aftermath of President Trump’s rally in Phoenix last night, in which a very large crowd of supporters was set upon by a smaller crowd of left-wing troublemakers led by Antifa, and after the rally the police moved in to disperse the protesters.

That dispersal was aided by the use of tear gas. What’s on the video was what happened when one of the Antifa goons, whose mommy bought him a gas mask that he could wear to protest the president, thought he was immune from the police. Said goon decided he’d run up to the cops in riot gear and kick a gas cannister at them (maybe he played in one of those everybody-gets-a-trophy soccer leagues as a little kid, which is why picking the thing up with his hands didn’t cross his mind) and then strutted back to friendly lines.

Except one of the policemen took deadly aim at him and gave him his own personal gas cannister, or pepper ball. Right in the babymaker.

Here’s just a little more video of this perfect moment…

And here’s a taste of what the aftermath of the rally looked like, courtesy of the Fox Business Channel whose reporter Jeff Flock found himself in the middle of it…

Four people were arrested, one for aggravated assault and one for criminal damage to property. Phoenix police chief Jeri Williams said the Antifa people brought their own tear gas, apparently to use on Trump supporters who attended the rally.

It’s one thing that Antifa thugs are intimidating out-of-the-mainstream people like neo-Nazis and white supremacists, whom nobody defends other than according to the principle of free speech even for those perspectives carrying no merit. It’s another thing that they’re attempting to use violence and chaos to de-platform people like Ann Coulter and Milo Yiannopoulos. Even worse, they’re now attempting to start riots at a presidential rally.

The nutshot one of them took from a hero cop with a cannister gun in Phoenix ought to be just the start. As I suggested in my American Spectator column this week, it’s time to begin treating these leftist revolutionaries like terrorists and open federal investigations into them – if nothing else than to smoke out the Democrat politicians who give them moral support.