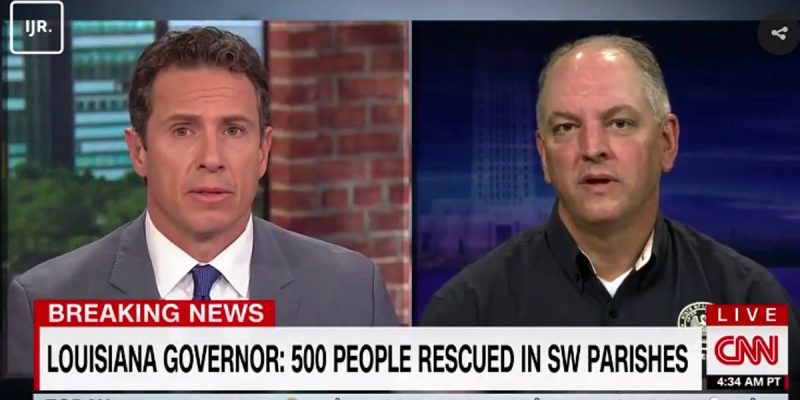 Two days ago, amid the devastation of Hurricane Harvey and President Trump’s visit to Texas to survey damage in the Corpus Christi area, Slate staff writer Katy Waldman darkly decreed, “It’s misleading to say that Houston showcases America at its best.”

Katy and her ilk crave calamity; they dream of discord. Katy sees people of all colors, creeds, and poltical views helping each other weather the storm, and she dispels our brotherly love as a myth. Katy offers up an alternate view of us as a country, supposing America to be “less a glorious nation of do-gooders awaiting the chance to exercise their altruism than a junior varsity team elevated by circumstance.”

Well, this story isn’t likely to leave the Katy Waldmans of the world feeling all warm and fuzzy. But we Louisianans may take heart! Because yesterday, our democrat governor heaped praise on republican President Donald Trump for his strong and prompt response to Louisiana’s request for federal support on the heels of Hurricane Harvey hitting our coast and bringing the pain in the form of destructive winds and rain.

Governor John Bel Edwards told CNN’s Chris Cuomo, “The federal government has been excellent. The president has called twice; he signed the declaration we requested within a few hours of our making the request on Sunday evening.”

Side by side on the piano keyboard, like…Well, ivory and ivory?  Okay, it falls short of the Paul McCartney/Stevie Wonder collaboration. It illustrates harmony, nonetheless. Dare I say it gives me hope? (Though admittedly, the other tune/scenario playing in my head is Trump doing a lively rendition of Dwayne “The Rock” Johnson’s, “You’re Welcome” of “Moana” fame. Can you hear it? “I’m just an [extra]ordinary president!”) But I digress…

(And if you’re one of the fear mongering pot stirrers who shared the outdated and thereby irrelevant Esquire piece declaring, “No One in Charge of FEMA…for Hurricane Season” to generate panic and take a potshot at the president as Harvey headed for the coast–shame on you. Stop doing that.)

Trump’s doing some good work for Louisiana, and for our neighbors in Texas, in this time of extreme crisis and untold suffering for so many.  Let’s take a cue from our governor and give credit where credit is due. Stay classy, Louisiana.

Interested in more news from Louisiana? We've got you covered! See More Louisiana News
Previous Article Can We Make Some Predictions About Baton Rouge’s Next Police Chief Now?
Next Article The FBI’s Race to Protect James Comey