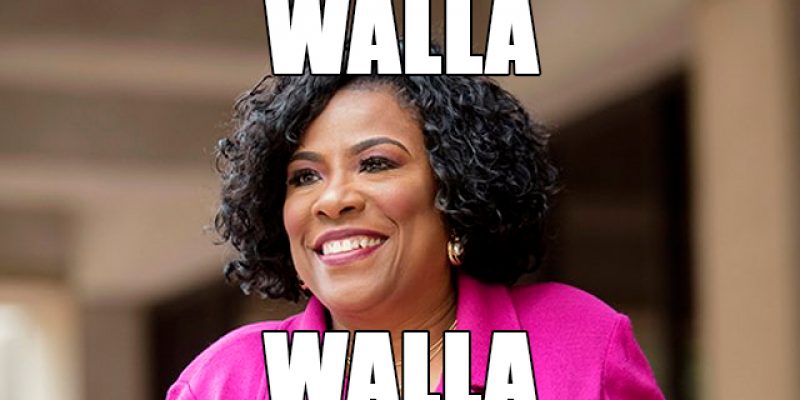 Seeing as though the promised “national search” that mayor-president Sharon Weston Broome promised after she forced Baton Rouge police chief Carl Dabadie into retirement isn’t going to happen, that is.

Oh, you didn’t hear about that? Sure, here you go – but be assured, it’s not a problem…

But a national search for Dabadie’s replacement never happened, hampered by the same rules that had kept the chief in place for months.

Broome will now have to make her hire from a group of 11 or fewer applicants.

The Municipal Fire and Police Civil Service Board confirmed Wednesday that it has received 11 applications for the police chief job. But those applicants still have to be reviewed at a Sept. 14 meeting to determine if they meet the necessary requirements. Then, they will take an Oct. 10 exam. Those who pass the exam with a score of 75 percent or more will be sent to Broome’s office for review.

A board official said the names of applicants would be released on Thursday.

She’s going to be choosing between 11 people who submitted written applications, and are willing to take a written test. It’s not exactly what she promised, even though the civil service laws pretty much dictated how things would go – and that presents a question whether it was ignorance or mendacity which accounts for the false advertising she’s now guilty of…

Interim Chief Administrative Officer James Llorens said he and the mayor met at the beginning of this month with James Baker, the advocacy director for the International Association of Chiefs of Police. Local governments can hire IACP to conduct their police chief searches and to consult on other issues.

Baker advised the Baton Rouge leaders that qualified police applicants from other states would be turned off by the requirement that they take an exam to show they are qualified for the BRPD chief job, Llorens said. And the Civil Service system that makes it difficult for chiefs to promote officers into leadership positions for reasons aside from seniority would make the top job even less attractive, Baker told them.

“After looking at the restrictions imposed on making it attractive to bring someone in on a national basis and the timeline involved in it, we thought we would go with the structure that we have,” Llorens said Wednesday. “And I believe that we will still get some qualified candidates.”

A mayor who was serious about improving things would have spent a lot less time on trying to run Dabadie off – nobody with any knowledge of law enforcement and its challenges thought he was a problem as the police chief in Baton Rouge – and a lot more time on trying to open up the process to hire his replacement when the time came.

What you have here is a two-fold failure. First was the destructive, overly public feud with Dabadie which set the perception of Broome as a hug-a-thugger and a politician hostile to the cops, and nobody is going to want to put his head in that lion’s mouth (we haven’t even gotten into the BRAVE scandal; while Broome’s people think they won a victory and were vindicated there, that’s not how the top cops around the country will see it). And second was the total inattention to fixing the antiquated hiring process Baton Rouge is stuck with.

So if there is a police chief hired who turns out to be any more qualified than Troy Bell was as chief administrative officer when Broome hired him, it’ll be a minor miracle. Get ready, Baton Rouge.

Interested in more news from Louisiana? We've got you covered! See More Louisiana News
Previous Article What Is The FBI Trying to Hide About Hillary Clinton?
Next Article MATENS: A Heaping Helping of Kudos for President Trump, Served Up By…Governor John Bel Edwards?