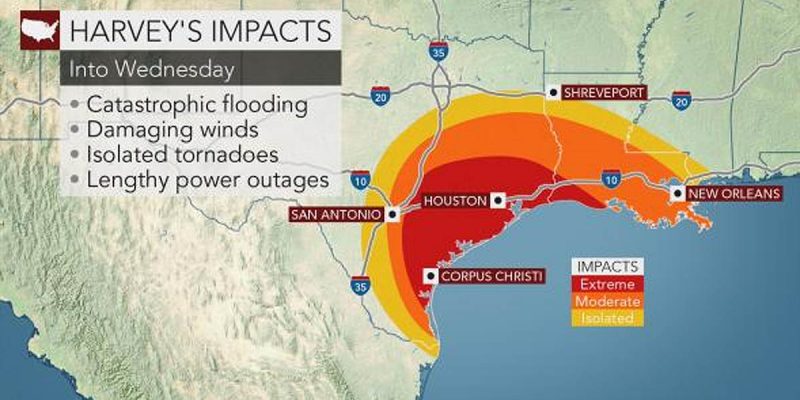 From the NHC’s Hurricane Harvey bulletin, just out…

The Hurricane Watch south of Port Mansfield Texas to the Mouth of the Rio Grande has been discontinued.

A Storm Surge Warning means there is a danger of life-threatening inundation from rising water moving inland from the coastline in the
indicated locations. For a depiction of areas at risk, please see the National Weather Service Storm Surge Watch/Warning Graphic, available at hurricanes.gov. This is a life-threatening situation. Persons located within these areas should take all necessary actions to protect life and property from rising water and the potential for other dangerous conditions. Promptly follow evacuation and other instructions from local officials.

A Hurricane Warning means that hurricane conditions are expected somewhere within the warning area, in this case within the next 12 to 24 hours. Preparations to protect life and property should be rushed to completion.

A Storm Surge Watch means there is a possibility of life- threatening inundation from rising water moving inland from the coastline in the indicated locations.

Interests in southwestern Louisiana should continue to monitor the progress of this system.

DISCUSSION AND 48-HOUR OUTLOOK
——————————
At 1000 AM CDT (1500 UTC), the eye of Hurricane Harvey was located by an Air Force Reserve Hurricane Hunter aircraft and NOAA Doppler radar near latitude 26.7 North, longitude 96.0 West. Harvey is moving toward the northwest near 10 mph (17 km/h), but its forward speed is expected to decrease significantly during the next couple of days. On the forecast track, Harvey will make landfall on the middle Texas coast tonight or early Saturday. Harvey is then likely to meander near or just inland of the middle Texas coast through the weekend.

Maximum sustained winds are near 110 mph (175 km/h) with higher gusts. Some strengthening is possible, and Harvey is forecast to become a major hurricane before it reaches the middle Texas coast.

The minimum central pressure based on data from the Air Force plane is 947 mb (27.97 inches).

STORM SURGE: The combination of a dangerous storm surge and the tide will cause normally dry areas near the coast to be flooded by rising waters moving inland from the shoreline. The water is expected to reach the following heights above ground if the peak surge occurs at the time of high tide…

The deepest water will occur along the immediate coast near and to the northeast of the landfall location, where the surge will be accompanied by large and destructive waves. Surge-related flooding depends on the relative timing of the surge and the tidal cycle, and can vary greatly over short distances. For information specific to your area, please see products issued by your local National Weather Service forecast office.

SURF: Swells generated by Harvey are affecting the Texas, Louisiana, and northeast Mexico coasts. These swells are likely to cause life-threatening surf and rip current conditions. Please consult products from your local weather office.

TORNADOES: A few tornadoes are possible later today through Saturday near the middle and upper Texas coast.

The forecast track of the storm has it slowing to a crawl once coming onto land somewhere near Port Aransas, Texas, just up the coast from Corpus Christi, and then bouncing back to the east – perhaps even going back out onto water. Click here for a detailed description of the NHC’s Hurricane Harvey forecast.

Here was the forecast map… 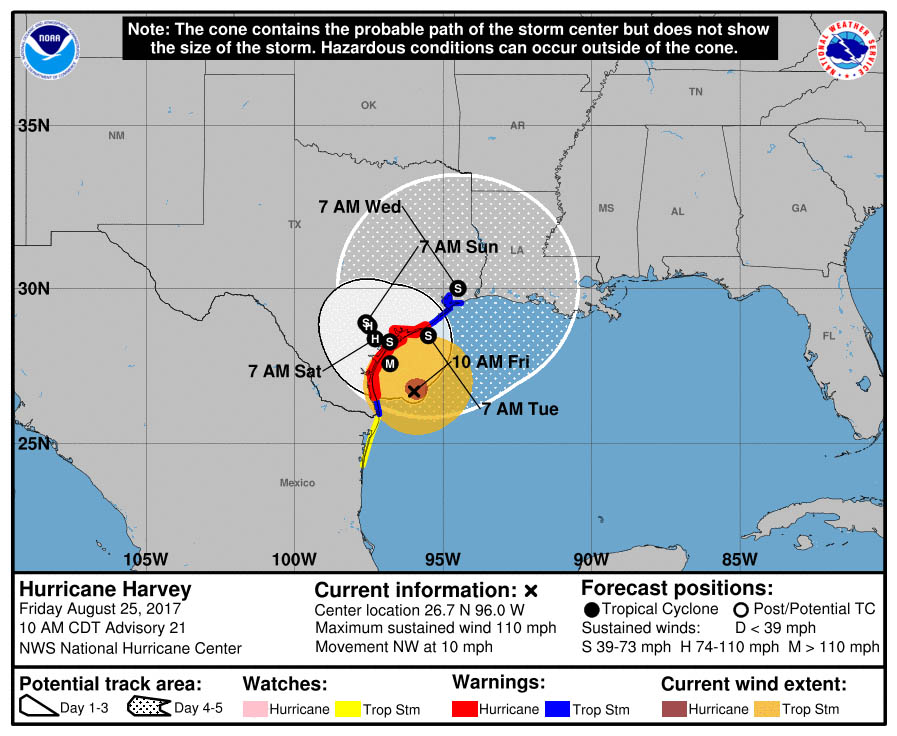 Having this thing bounce back into the Gulf and then make a beeline for Houston on Tuesday is really not the plan we all wanted to see. But it’s what we have.

We’ll keep you up to date on Hurricane Harvey as developments occur.

Interested in more news from Texas? We've got you covered! See More Texas News
Previous Article BATISTE: Mitch Landrieu Says His Aspen Speech A Higher Priority Than New Orleans Flooding
Next Article BAYHAM: How Latvia Got It Right (and New Orleans Got It Wrong)