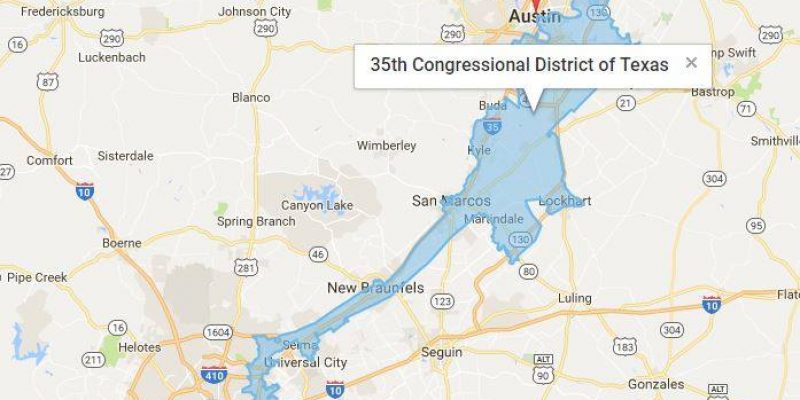 On Tuesday, a three-judge panel in San Antonio unanimously ruled that Congressional Districts 27 and 35 violate the U.S. Constitution and the federal Voting Rights Act. The ruling found that the Texas Legislature or a federal court can correct the district maps.

One district, 27,  is currently held by Republican Blake Farenthold of Corpus Christi and the other, 35,  is held by Democrat Lloyd Doggett of Austin.

In the case of Farenthold’s district, the judges found that Hispanic voters were “intentionally deprived of their opportunity to elect a candidate of their choice.”

In Doggett’s case, the court found the district was drawn with “an impermissible racial gerrymander” because lawmakers illegally used race as the predominant factor.

So in one case, a specific race was deprived and in another race was a predominant factor.

The panel gave Texas Attorney General three days to determine whether the Texas Legislature would redraw the lines. If they do not then the state will go back to court to work out a new map beginning September 5th. The court hopes to keep adjoining districts from being affected too much.

In 2011 the court found the new census maps that had been created sought to weaken the impact of black and Latino voters. So before the 2012 elections temporary maps were redrawn and formally adopted in 2013. The 2013 lines of Congressional Districts 27 and 35 were not re-drawn in those new maps.

The judges did rule that District 23 could stay in tact. The largely Hispanic district is represented by a black Republican in Congress who just won his first re-election bid.

General Paxton released a statement on the decision:

“We appreciate that the panel ruled in favor of Texas on many issues in the case. But the portion of the ruling that went against Texas is puzzling considering the Legislature adopted the congressional map the same court itself adopted in 2012. We look forward to asking the Supreme Court to decide whether Texas had discriminatory intent when relying on the district court.”