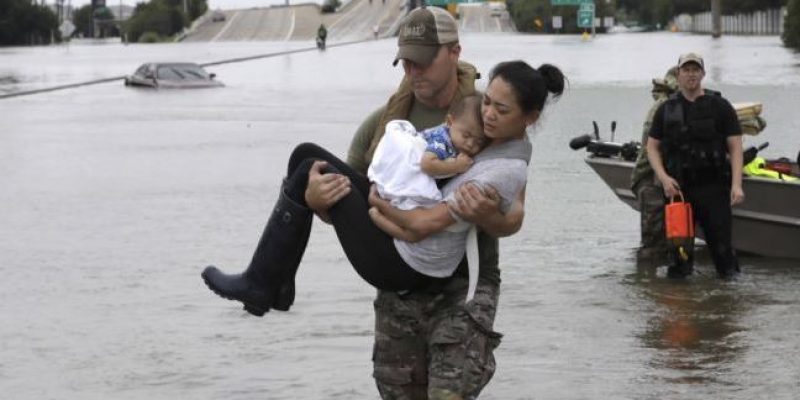 As Houston suffers through its third day of Hurricane Harvey a lot of blame is being thrown around. Some towards Mayor Turner for discouraging evacuation, others towards President Trump for whatever the Left can think of, and now some towards Joel Osteen of Lakewood Church for not opening the church building.

I love good discussions and think the arguments of “timing” are faulty because it is good to discuss things while it is top of mind and if you can not help people directly an online conversation is not a bad thing. It does become bad when blame is thrown around without cause.

I am in no way a fan of Joel Osteen. I come from a reformed Baptist background and take a much different view than he presents in his presentations, but I also do not hold to the idea that because he did not open the church building that he is some scammer.

Several photos from the Leftist group Indivisible were shared around the internet showing some non-flooded area and they are correct. The church is not currently under ground.

What they do not show is many roads around the church building that are flooded and that the garage lower levels are flooding. For now, the church is safe and it may remain so, but considering that there are four more days of rain to come then sheltering people here when other locations are still available is not wise policy.

Here is Chris Carmona at the site:

As much difference I may have with Osteen’s theology the church does have a history of charitable giving. In fact, it was one of the biggest supporters of victims of Hurricane Katrina as many fled their homes in Louisiana.

The church itself has many members and staff that are in harm’s way and in need of support. To assume they do not care is quite the stretch.

“I know of about three staff members that have needed to be rescued. There may be more but I happen to know of about three of them that literally had to be pulled out of high water,” Lakewood spokesperson Don Iloff, Osteen’s brother-in-law, told The Christian Post on Monday.

As atheist writer Hemant Mehta wrote, “I’m sure they’d open up the building as a shelter if they could. (Just think of how much good publicity they’d get!) The fact that they haven’t done it suggests they’re unable to help, not that they’re refusing to help.”

While the church is not open as a shelter there are eight maintenance crew members at the church and have been instructed to let people in if they come in need, but they say no one has come there seeking shelter as of earlier reports.

“They would have to swim to get there,” he explained, adding that there is a flood shelter set up a couple miles from the church at the George R. Brown Convention Center.

As roads clear, the church building is opening up as a donation center and will open as a shelter if needed and effective, but right now inviting thousands to an area that is not really safe is asking for a greater disaster. They hope to open at noon tomorrow.

Coordinating with the city, Lakewood is a collection site for distributing supplies to the Houston area shelters. …

Items for infants are greatly needed.

I have no idea if Joel Osteen and Lakewood made the best decision not to open the church. There are plenty of ways it could go bad, but I do believe many staff members and congregation members are in desperate need and would love to be helping if they could.

Now can we please stop assuming the worst? Texans across the state are helping their neighbors, sending supplies, taking rescue boats. Tens of thousands are working together to do the best they can. Discuss policy, make jokes, continue on in whatever way you can find comfort in this madness, but do not let anger and frustration take hold. Look at all the good happening in the midst of this crisis. If you can find a way to help then help. If you pray then pray. If you just need to get away from the media and noise and horror then shut it all down, even The Hayride. This is a disaster that has many people in pain, but Texas will get through it and we will help one another. For now, we are all just doing the best we know how.

So please stop making me defend Joel Osteen and cheer on these amazing heroes instead:

A woman is helped by rescue personnel while being evacuated as floodwaters from Tropical Storm Harvey rise in Houston, Texas. pic.twitter.com/5DubeLfleF

#Texas, we will make it through this. Together with first responders & rescue teams, we'll do whatever it takes. #TexansServingTexas #Harvey pic.twitter.com/LNtJK53FfR

Every rescue is emotional, this one for me symbolizes what Texas first responders mean to everyone. #cowboyup #maninthewhitehat #texascares pic.twitter.com/nvmkYLPSUg

Rescue efforts underway for pets across SE Texas, with shelters helping animals that are scared, hungry and alone https://t.co/BBUXXgZbGP pic.twitter.com/ncwVE3cUrR

Thank you @HEB The people of Texas apprechiate it !! pic.twitter.com/tno6mmq9u5