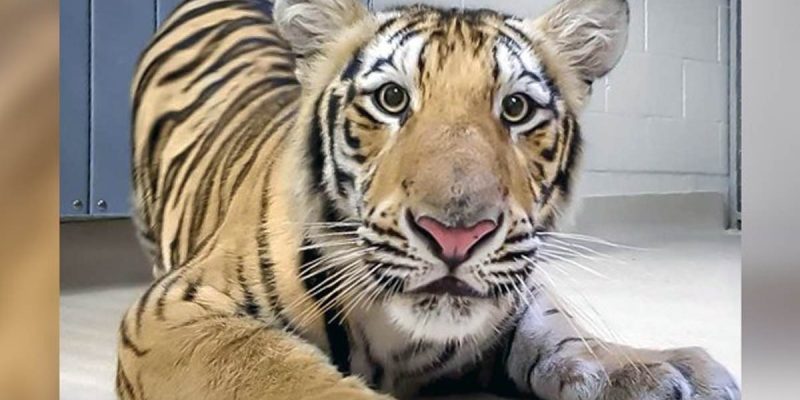 His name’s Harvey, but unless something unexpected happens he’ll shed that moniker and become Mike VII and grace LSU as the next live tiger mascot for the next several years.

A potential Mike VII has arrived.

With students moving into residence halls, another new prospective member of the LSU community is also moving in this week – a possible new tiger mascot.

The tiger, “Harvey,” arrived on campus August 15 and is currently being housed in the night house of the tiger habitat.

The 11-month-old, male tiger must be quarantined in the night house for at least one week to be observed by LSU verterinarians to ensure that he is healthy and a good fit for LSU. If that occurs, he will be formally introduced as Mike VII. Until then, he is not Mike the Tiger.

During the quarantine period, the rescue tiger will be acclimating to new surroundings and will not be on view to the public or media. LSU vets say his overall health must come first.

Harvey is not Mike VII until he is formally introduced as the new mascot and released into his yard.

LSU has not purchased a tiger since Mike III in 1958, and LSU does not support the for-profit breeding of tigers, according to a press release sent out by university relations.

We’ve had a couple of previous posts on the new Tiger, including one which misidentified him as Rocky rather than Harvey. That was the rumor mill’s concoction, though the folks at Wild at Heart Wildlife Center were on Facebook debunking it.

Speaking of the Wild at Heart people, here’s what they had to say today…

Not quite sure who the FWC is, but obviously they played a role in connecting the two parties.

So sometime next week, we imagine, Harvey will emerge, Punxsutawney Phil-like, from his night-house into the newly-renovated tiger habitat across the street from Tiger Stadium, and take his place as Mike VII. That’ll be fine by us; passing that habitat since Mike VI died has been more than a little sad of late. A rollicking, playful young Panthera tigris stalking around in there will be a nice change.