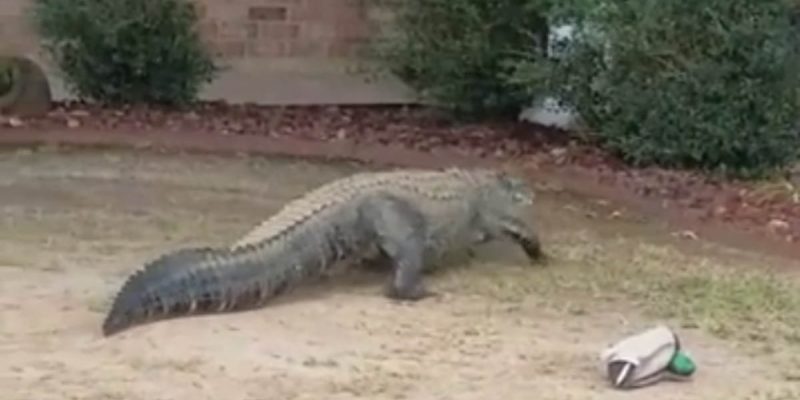 Here’s a lil’ viral video outta St. Martin Parish, specifically in Breaux Bridge like it says in the headline, where an eight-foot gator decided he’d come pass a good time on one of his neighbors’ front porch, I ga-ron-tee.

The dude shootin’ this video says they decided to call this big fella George, but he didn’t say which George they were namin’ him after. He could be George Jefferson, because that looks like a nice house there an’ maybe he’s movin’ on up. Or maybe he’s Curious George, since some guy’s front porch ain’t exactly a perfect spot for a gator to plop down. Almost curious, you might even say. He might even be the most curious thing in Breaux Bridge.

If he was wearin’ a vest you could absolutely say he was an investigator. Or maybe you could call him a Cajun guard dog. I’ll be here all week.

One day, Marie sent her little boy “Tee” Boo down to the pond to get some water for cooking dinner.

As he was dipping the bucket in the water, he saw two big eyes looking back at him from the water. He dropped the bucket and hightailed it back to the kitchen.

“Now, where’s my bucket and my water?” Marie asked him.

“I can’t get any water from that pond, Momma” cried “Tee.” “Dere’s a BIG ol’ alligator down der!”

“Now don’t you mind that ol’ alligator, “Tee”. He’s been there for a few years now, and he ain’t never hurt nobody. Cher, he’s probably as scared of you as you are of him!”