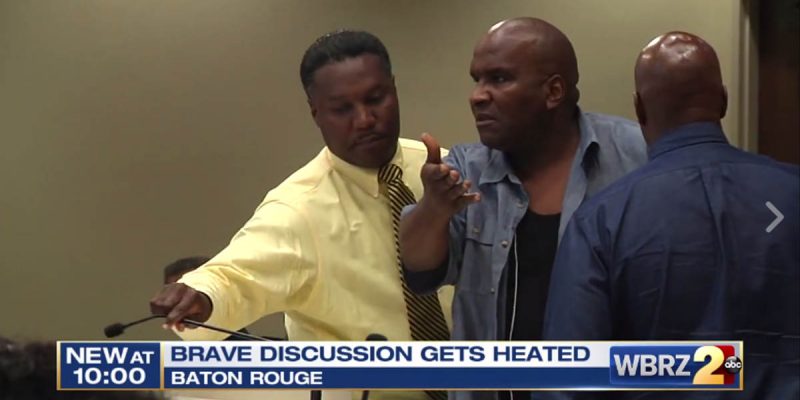 Hey, who wants to run for the Baton Rouge Metro Council? It’s a great job. They pay you a little over a thousand bucks a month, the majority of what you deal with is painfully boring in-the-weeds minutiae, and the Metro Council meetings you’re forced to attend every two weeks invariably descend into shouting matches in which creeps like Arthur “Silky Slim” Reed proceed to berate the city’s elected officials over Alton Sterling.

That’s essentially the life story of Metro Council President Scott Wilson, who has to preside over the council’s meetings and endure periodic abuse from Reed and others like him. Here was last night’s installment…

And yes, that heavyset individual shaking his head at the proceedings in the back of the room is Gary Chambers. Even Gary Chambers, who got himself arrested by making a similar ass of himself at a Metro Council meeting a few weeks ago, is embarrassed for Silky Slim.

Remember, though, what brought this on was an invitation. Metro Councilwoman Chauna Banks-Daniel actually gave her time to Silky Slim to come to the podium and rant about Alton Sterling, which was off the Council’s agenda. She’s the one responsible for Reed’s outburst and the physical threat made against Wilson included in it.

But that wasn’t all which took place at last night’s installment of Government S**tshow Theater. Last night Metro Councilman Buddy Amoroso was also treated to a host of denunciations by people who had been given contracts under the BRAVE program to put on basketball tournaments and give free rides to and from court dates, not to mention Councilman Lamont Cole calling the scrutiny of the BRAVE spending a “public stoning.” And yes, the race card was played…

It’s a little tiresome to see the immediate reliance on Racism! as the explanation for criticism of mayor Sharon Weston Broome’s having looted the BRAVE program to feed her political allies. This week the most outspoken critic of Broome, who in fact suggested a federal investigation would likely land much of her team in a federal penitentiary, was former mayor Kip Holden. Who is not white.

Either the BRAVE program was looted to benefit the mayor’s pals, or it wasn’t. Race has nothing to do with it. But try to make that point, and especially try to do so in the name of accountability for public dollars being spent, and you’ll bring down the rantings of morons like Silky Slim and the hyperventilations of the Lamont Coles of the world.

Yes, it’s a fine job, that Metro Council. Surely the folks are lining up to run for it.