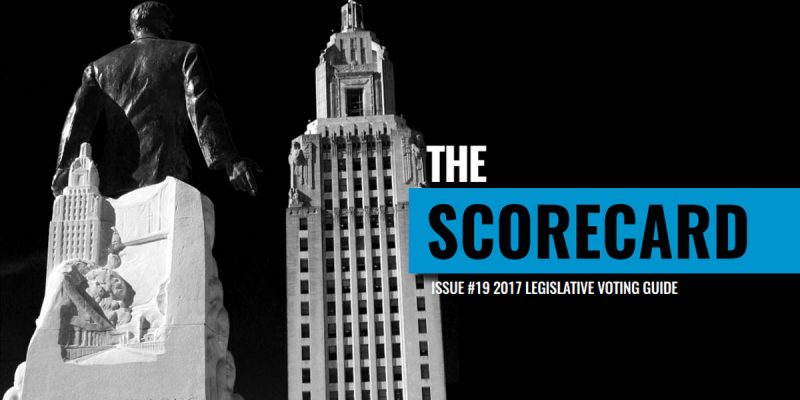 This week, the Louisiana Association of Business and Industry (LABI) released the 2017 edition of the Legislative Scorecard, highlighting the elected leaders who have a solid foundation in policies that promote economic growth. To review the report explaining LABI’s 2017 priorities, the outcomes of the recent fiscal session, descriptions of the bills used in the Scorecard analysis, the individual legislative scores and the detailed methodology behind the scores, please visit www.labi.org/score-card.

If you take a moment to review the Scorecard, a few things might surprise you.

Throughout the year, the defenders of the status quo have continued to spread a disingenuous myth claiming LABI opposed most proposals to address the fiscal cliff. The Scorecard clearly demonstrates the reality that this has been, and continues to be, an intentional misrepresentation intended only to confuse voters and mask ulterior motives.

In the Senate this year, LABI scored only four votes dealing with taxation, three for criminal justice reform, two to help deregulate certain industries, two to reform our broken pension system and one to protect transportation funding. In the House of Representatives, LABI scored just four tax votes, four on criminal justice reform, three in favor of deregulation, one to protect transportation funding and one aimed at reducing opioid abuse. This is a balanced, well-rounded agenda to help address many of the state’s challenges in a responsible way. These combined 21 votes represent high-priority legislation that has a major impact on the state’s economy, representing a fraction of more than 950 bills introduced and countless other votes taken in this year’s regular session.

Although historically the attributed scores tend to draw the focus from audiences across the state, the goal of the Scorecard is, in fact, to educate Louisianans on significant issues debated in the Capitol so that voters can become well versed on specific policy choices and options. Specific explanations of each of the major issues faced by the Legislature and Administration are presented, all drafted so you do not have to be a lawyer to understand the law-making process. Too often, incomplete data, spin and one-sided talking points are spread to cloud reality when it comes to the level of state spending, the fractured nature of our budget process, the amount of dedicated funding to annually subsidize certain entities and the growing pressure unreformed entitlements are putting on taxpayers each year.

That trend will undoubtedly continue this year, and we will be ready to provide research-based responses when it happens. In fact, just last month, LABI was proud to receive the 2017 national award from the Governmental Research Association in recognition of our efforts to analyze and share tax policy debated in the Capitol with the public, which can also be found in this year’s Scorecard and on our website at www.labi.org/research.

Third, while the Legislature was solely and unfairly blamed by some for the fact this year’s session did not address the upcoming fiscal cliff, there are many lawmakers who deserve recognition for their efforts to defend jobs and free enterprise in 2017.

In addition, there were six senators and 13 representatives who claimed the title of “LABI All-Stars,” scoring 90 percent or higher on the legislation selected for the Scorecard analysis. These legislators were strong advocates for advancing a platform of positive, pro-growth measures to improve Louisiana’s business climate.

Finally, also recognized in the Scorecard are the 23 “LABI Honorable Mention” legislators from across Louisiana who scored 80 percent or higher on bills selected for the Scorecard analysis. The votes cast by these legislators also served to challenge the status quo in state government and prioritize jobs for Louisianans.

Without a doubt, this was a contentious year in the Legislature. There are many examples of the need for improvement in terms of policies, bipartisanship and a collaborative spirit to address our challenges in a way that prioritizes the needs of the people over the wants of government. Having said that, it is also important to thank those folks that put forth tremendous effort to represent the voices of Louisiana taxpayers each and every day during session and encourage them to do so again in the days ahead.

Please visit our website to explore the 2017 Legislative Scorecard at www.labi.org/score-card.  I think you will find it worth your time.

Also, we hope you can join us on November 16, 2017, at the second annual LABI Free Enterprise Awards reception. At this event, the LABI MVPs, All-Stars and Honorable Mentions will be honored by LABI members alongside employers and business leaders who have proven their exemplary commitment and contributions to their local communities and the state’s business climate. Nominations for these awards will open soon, so stay tuned.