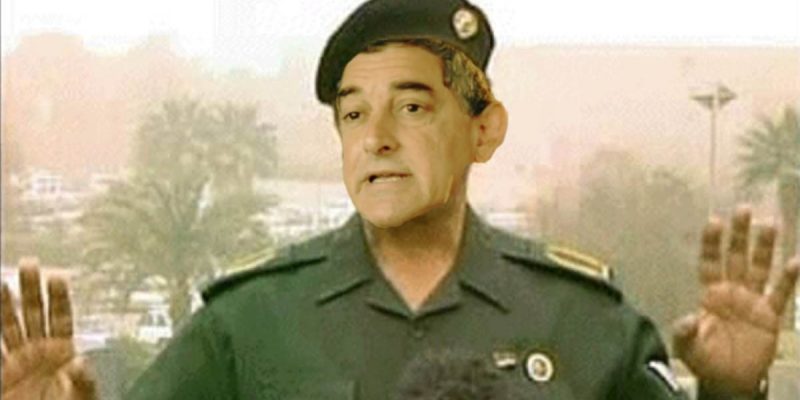 It’s a contention that rests on a breathtakingly thin reed of spin, but Louisiana’s Commissioner of Administration Jay Dardenne is actually pushing the line that state government hasn’t expanded since he took a job as the budget chief for the state’s Democrat governor.

And he’s not joking – at least it doesn’t appear so.

In a speech to the Baton Rouge Rotary Club, Dardenne gave a concise crash course on the factors affecting the state’s current fiscal crisis, and he tried to dispel the notion—frequently disseminated by critics of the governor—that the size of state government has grown under the current administration.

“This governor has not grown state government,” Dardenne said, noting that the 2018 state general fund budget is $9.4 billion, about $1 billion less than it was a decade ago.

Dardenne explained that the growth in spending often pointed to by business and anti-tax groups has come from the federal side of the state budget. Federal dollars account for an increasingly large part of the state budget—40% today compared to 23% in 1982.

He went on to explain that only state general fund dollars are available to spend, and of that amount nearly half—$5.1 billion of $9.4 billion—is discretionary. The rest is dedicated to K-12 education, paying off state debt and local governments.

Louisiana’s final budget under Bobby Jindal’s administration was under $24 billion. It’s over $28 billion now. Parse it all you want, but when your state government budget grows by $4 billion in less than two years you’ve expanded state government.

Dardenne isn’t lying when he says that spending growth is largely the result of federal dollars, and particularly dollars flowing in from the Medicaid expansion John Bel Edwards ushered in as soon as he was inaugurated. Although given some $2 billion in tax increases which have been inflicted on Louisiana’s citizenry, it’s a tough sell to say all of the spending growth comes courtesy of the feds.

And by the way, if you’re paying state taxes you’re probably already paying federal taxes. So federal tax dollars making their way into state government to fund an expansion of federal programs the state administers is going to look an awful lot like an expansion of state government to you, and anyone who comes along to explain otherwise to you is going to look a lot like he’s full of BS.

Which Dardenne does, of course. Particularly when he uses his base point as “a decade ago,” which was a time when Louisiana was flush with federal Katrina recovery dollars. To say that you haven’t grown government because it’s smaller than it was in 2007, when the state’s budget went from $29 billion to $23 billion during the time Bobby Jindal was governor, is a bit of spin so aggressive as to rob its author of credibility.

This is the kind of statement which is later regretted. The Medicaid expansion is a ticking time bomb for Louisiana’s fisc. It has put some 433,000 people on the Medicaid rolls, and they now have the worst health insurance in America – they’re enrolled in something Sen. Bill Cassidy calls “the illusion of health insurance.” Cassidy, a medical doctor who sees Medicaid patients, would know, and he’s correct – most of his medical colleagues avoid treating Medicaid patients like the plague because the reimbursement rates are so low, and that means your access to health care under Medicaid is virtually nonexistent unless you go to an emergency room – which Medicaid patients do at disproportionate rates.

And while Medicaid advocates tout the fact that the federal government picks up 90 percent of the cost of those ER visits, as opposed to only 60 percent of the costs for indigent, uninsured patients, in reality it does little good for the state when there’s a flood into the emergency rooms. Little wonder that study in Oregon proved there is no discernible increase in health care outcomes for people on Medicaid vis-a-vis being uninsured.

And Louisiana is on the hook for 10 percent of that cost increase at a time when the state can’t afford any cost increases at all. Which assumes we’re only talking about 10 percent – virtually everyone who’s paying attention to the healthcare debate in Congress knows that some adjustment is going to be made to the Medicaid expansion and what comes out of that adjustment will certainly be an increase from 10 percent.

The Louisiana Department of Health now has a $14 billion budget. Its budget was $9 billion for the 2013-14 fiscal year. Jay Dardenne says he and John Bel Edwards haven’t expanded government in Louisiana. And he actually wants you to believe him.

UPDATE: In case you’re interested in how completely disingenuous Dardenne’s statement was, here’s a chart showing the state’s budget picture over the last 10 years. 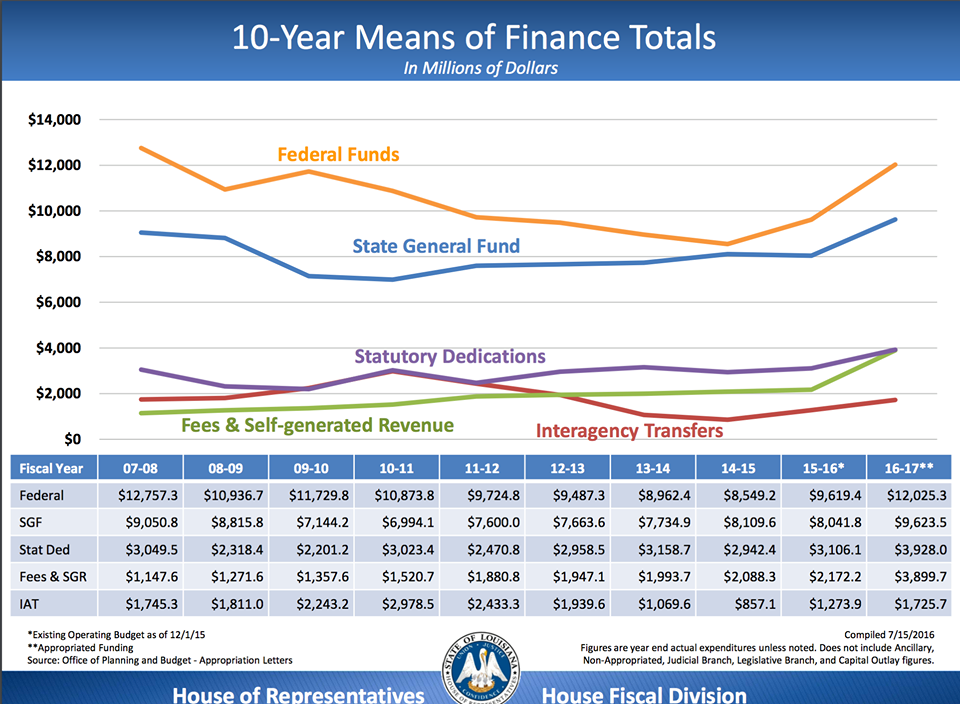 Interested in more news from Louisiana? We've got you covered! See More Louisiana News
Previous Article L’AUDACE: The Impressive Chutzpah Of Dorothy Jackson
Next Article WAGUESPACK: The Scores Are In…And A Few Things Might Surprise You