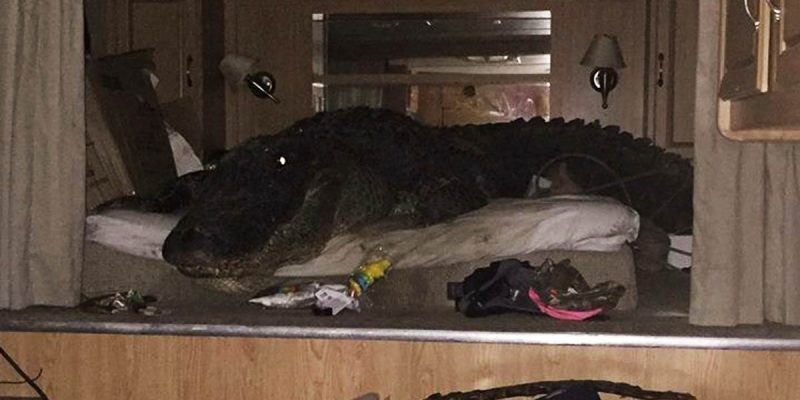 You might have heard about Gator Country, the alligator preserve in Beaumont, Texas where 350 reptiles are housed, and how it was flooded by the rain and storm surge of Harvey. There was a sizable social media firestorm over the possibility that those 350 gators would be released in the event the floodwaters rose above the tops of Gator Country’s fences…

On Monday night and Tuesday morning there were social media rumors that the sprawling Gator Country complex in Beaumont had had a catastrophic escape of some 350 alligators.

That is not true, according to John Warren who is one of the heads of the Texas Parks and Wildlife alligator program.

“There has been extensive damage to their buildings but there is not a threat to human life,” Warren said Tuesday. “We understand it’s a legitimate worry.”

The water never did go above the top of the fence as the flooding crested yesterday, though. And Gary Saurage, who runs Gator Country, gave an update yesterday…

Big Al and Big Tex are a pair of 13-foot-plus gators the park boasts as prized attractions. To keep them safe during the flood, the Gator Country folks put them in trailers.

And the picture at the top is of Big Tex, who as it turns out might be more your indoor gator. The caption going along with the picture, posted on Facebook, tells you all you need to know…

They apparently had him set up in the outside part of the trailer, and that wasn’t good enough.

How do you get a 13-foot gator off a bed that he’s decided he likes? Apparently he can’t get out of the trailer anyway, so they’ll have to break out one of the walls to get him out of there.

There was never a particular risk to the public arising from the inhabitants of the park, by the way. As the Wildlife & Fisheries guy quoted above said, 350 alligators is a drop in the well considering the size of the gator population in the wild surrounding Beaumont – and considering the cannibalistic nature of alligators that wild population is a far larger threat to any Gator Country escapees than the escapees are to people.

But nobody ought to be surprised if there happen to be gators found making themselves at home in neighborhoods all throughout southeast Texas as those floodwaters recede. Gators there are aplenty, and the storm has made human habitats into their habitats from Port Aransas to Cameron Parish.