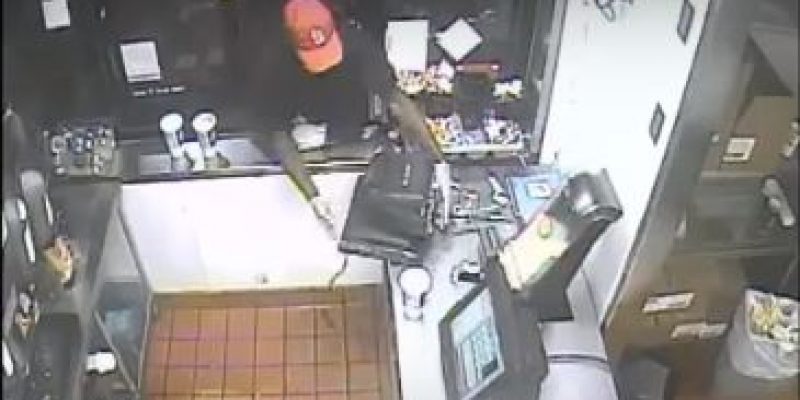 Crime in New Orleans is generally a grisly affair, but on some occasions, the criminal is so blitheringly incompetent that you just have to laugh.

Apparently, over the weekend, a strong-arm thief decided to make a grab for the cash register at my local Taco Bell, located at the corner of Washington Avenue and South Claiborne Avenue in New Orleans.  I myself have enjoyed many a quesadilla from this location (although I am not proud of this).

However, this is not 1985, and the touch-screen register did not include a cash box.  It was just a monitor.  Accordingly, the robbery proceeded thusly:

Surveillance video captured the moment a man on foot rushed up to the drive-thru window of a Taco Bell in Central City and instead of ordering a Grilled Stuft Burrito or Nachos Supreme, smashed through the glass and snatched a cash-register monitor before running away, according to New Orleans police.

The video, released Wednesday (Sept. 27), shows the unidentified man breaking the window and removing the monitor about 12:30 a.m. Sept. 20 at the Taco Bell in the 2800 block of South Claiborne Avenue, police said.

The suspected robber, who appears to be wearing gloves, can be seen in the video walking up to the Taco Bell drive-thru and then using “an object and his hands” to break through the window, according to the NOPD. After grabbing the cash-register monitor, he fled on foot, heading southbound on Washington Avenue.

That’s right, the enterprising thief was smart enough to wear gloves for his smash-and-grab, but too stupid to realize that he wasn’t grabbing anything with significant street value.  A single component of a point-of-sale system, even a major one, probably can’t be fenced.  The Taco Bell is presumably insured, and although the screen won’t be cheap to replace, it’s a good thing nobody was hurt.

I’ve often said that we’re lucky on two fronts: 1) crime has been trending down nationwide for decades; and, 2) most criminals don’t seem to be getting any smarter.

Interested in more news from Louisiana? We've got you covered! See More Louisiana News
Previous Article APPEL: Stuck Pigs Squeal The Loudest, And So Do The Lawyers
Next Article BREAKING: Steve Scalise Is Returning To The House Floor (Updated, With Video)