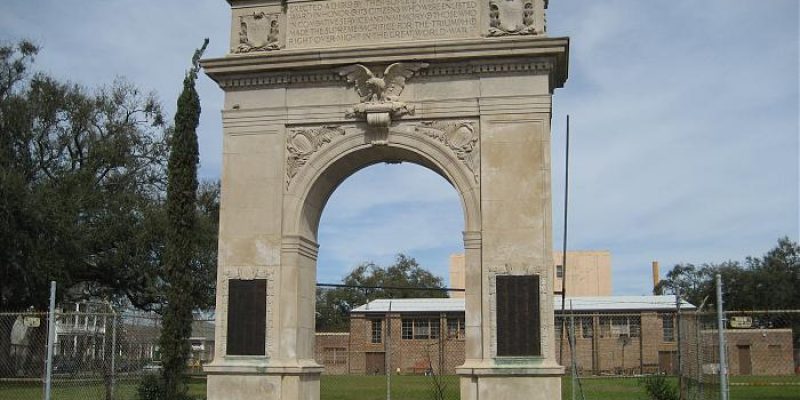 New Orleans has a new front in the monument attack, and it’s educators against a World War I veteran memorial.  The Orleans Parish School Board owns the land on which the 9th Ward Victory Arch stands.  Most people are oblivious that this landmark even exists.  It stands on Burgundy Street in Bywater at the edge of the sidewalk, closely bordered with a chain linked fence separating it from a field.  28 feet tall and 21 feet wide, the limestone arch is adorned with carvings and four bronze plaques.  The placards recognize everyone from the 9th Ward who answered their country’s call of duty in World War I, all soldiers, sailors, marines, Red Cross, and other workers totaling 1,260 names.

This great monument is a product of the 9th Ward.  Newspapers from the time show that the people and businesses of the 9th wanted to honor their own.  The organizers proudly boasted that the money raised came entirely from within the 9th Ward. Door-to-door campaigns, monument subscriptions, and several events raised $7,000.

“The Victory Arch represents the best of New Orleans.  A cultural enhancement initiated and funded by 9th Ward residents to honor all 9th Ward military veterans of World War I,” the Monumental Task Committee said in a statement.

In 1919, the Times Picayune called the Arch one of “the most important movements for memorials to New Orleans heroes of the World War now on foot.”

The war ended in 1918 and the Arch was erected about a year later in what was then Macarty Square.  The Victory Arch was the first World War I monument in America.

The controversy comes in because the Monumental Task Committee wants to restore the 9th Ward Victory Arch for the centennial of the Armistice of 1918.  MTC applied for a grant through the WWI Centennial organization and the grant awarding is pending.  Even without the grant, MTC wants to restore this beautiful monument without costing the taxpayers any money.  However, it stands on School Board property and thus requires approval to work on it.

The School Board supported the restoration at first.  On July 14, 2017 Eric Seling, the C.O.O. of the Orleans Parish School Board, made an introduction of the Monumental Task Committee to the KIPP C.O.O.  The next day, the Deputy Chief for Facilities of OPSB signed a letter allowing permission of MTC to restore it contingent on KIPP approval, KIPP Renaissance High School being the school located right by it.  Then on August 3rd Eric Seling sent Pierre McGraw, the President & Founder of MTC, another email stating, “After further research and discussion, I wanted to let you know that the proposed refurbishment of the 9th Ward Victory Arch is not one that OPSB will support.”

That means the Orleans Parish School Board rejected a free restoration of an almost 100 year old artistic arch, and to reemphasize, it would not cost OPSB or taxpayers any money, yet they still oppose it.  Seling has not expounded upon the research he mentioned.  The Arch can be found on Take Em Down NOLA’s hit list, which truly should not mean anything, but in this case it seems that the School Board is taking cues from Take Em Down.

Or, more than likely, this about-face shows the long reach of Mitch Landrieu.  Seling previously worked for the Landrieu Administration as Service and Innovation Manager from 2011 to 2014 before becoming Mitch’s Chief of Staff from June 2014 to April 2015. Their connection, at least in part, likely serves as the reasoning behind the School Board’s new refusal to play nice.  The Monumental Task Committee is a monument preservation nonprofit that opposed Mitch’s removal of century old monuments.  The group fought the removals in court and when they came down under darkness, MTC ripped Landrieu.

“Influenced by the great arches of the world, it’s a magnificent monument that’s tucked away and poorly displayed,” MTC’s statement said. “The fact this grand arch is neglected is a shame, but worse is that the Orleans Parish School Board refuses to allow it to be properly restored, at no cost to taxpayers. Their position may reflect today’s anti-monument movement, but it’s an insult to the descendants of those who contributed to its construction and especially to the veterans who fought in the Great War.”

The potential controversy may be based on the plaque recognizing “colored” troops. The media always likes to point out when Confederate monuments were erected during the “Jim Crow Era.”  The 9th Ward Victory Arch was built during the days of segregation.  The reality is that this plaque was progressive considering it was put up to honor black people during the “Jim Crow era.”

A similar fuss was made about a WWI monument in 2015 that had veterans listed by “white” and “colored” in South Carolina.  Historians noted these monuments represent the way America was, not is.

“Segregation was the accepted social order of that time,” said Eric Williams, who spent 32 years as a historian with the U.S. Park Service. “If we alter the monument, we alter its historical integrity.”

The National Archives make draft cards available online.  It appears that the OPSB C.O.O. Eric Seling’s great grandfather Ernest enrolled in the U.S. Army during World War I.  What would Ernest Seling think of his great grandson refusing maintenance on a World War I memorial?  Further, Eric Seling’s grandfather Arnold Seling was a veteran of World War II.  What would Arnold Seling think of Eric’s anti-war monument stance?  The Hayride reached out to Mr. Seling with several questions that have not been answered yet

The Monumental Task Committee worked on the Victory Arch in the past.  The preservationists cleaned the arch in 1997—they received a letter of support from the School Board then—and did a major restoration in 2002.

The monument controversy that’s raging across the country started in New Orleans, and it’s not being talked about during a major election season.  Maybe the future elected leadership of New Orleans supports the School Board’s position, it is unknown.

What is known is that the slippery slope is real. The anti-monument movement began by calling for the removal of Confederate Battle Flags, then memorials to Civil War leaders on the Confederate side, then extended to war memorials to rank and file troops, as well as women of the Confederacy.  Now extremists have targeted monuments that include Christopher Columbus, Andrew Jackson, Abraham Lincoln, Ulysses S. Grant, Francis Scott Key, Catholic Saints, and Joan of Arc. Mitch Landrieu opened Pandora’s Box and did so knowing that the ramifications would be vast.

Mitch’s crusade against history has continued to expand and now local government wants a war memorial to New Orleans’ own veterans to remain in a state of neglect.

Interested in more news from Louisiana? We've got you covered! See More Louisiana News
Previous Article Orleans Parish School Board Caves To Take ‘Em Down NOLA And Won’t Restore A World War I Monument
Next Article POINDEXTER: F. King Alexander’s “Week Of Reflection” Is A Stunning Assault On The First Amendment