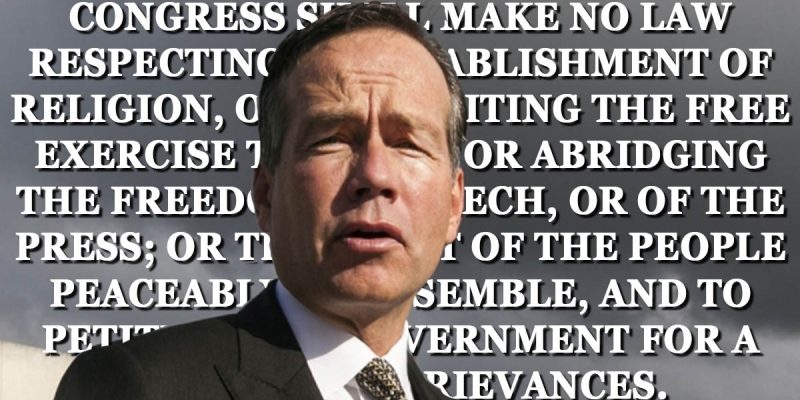 Editor’s Note: A guest post from M. Simon Poindexter, a Louisiana lawyer who cares about the First Amendment much more than he holds any particular affinity for the Greek system.

Today, LSU announced sweeping restrictions on Greek activities at LSU, including the suspension of all social events, community service, study hours, and any chapter events. The “Week of Reflection,” terms, imposed upon the students after the tragic death of Maxwell Gruver, seems well-intentioned. It certainly appears Gruver died because of binge drinking, and potentially hazing.

Educating these young adults (and I stress, adults) about the dangers of binge drinking and drugs is surely a noble cause. Requiring them to “reflect” on what it means to live the ideals of their Greek organizations, and the responsibility of friendship, brotherhood, what have you, also seems reasonable. Maybe they should hold off on the parties for a while, too.

But what LSU imposed upon the thousands of young adults at LSU who have chosen to be Greek is to a stunning and sharp rebuke of the First Amendment, something that should concern us all. Freedom of expression on campus is in the news because it matters.

The “Week of Reflection” document reads as if it was written without any concern for the law, or these adults’ rights. The document is vague, and it is overbroad: it substantially prohibits a significant amount of conduct that has nothing to do with the concern for binge drinking. For example, wouldn’t designated driver programs be… you know… a good thing? Why suspend them? Community service? What if a group of Sorority members go to church together on Sunday? What is to be gained (other than a few pounds) by prohibiting group fitness activities? 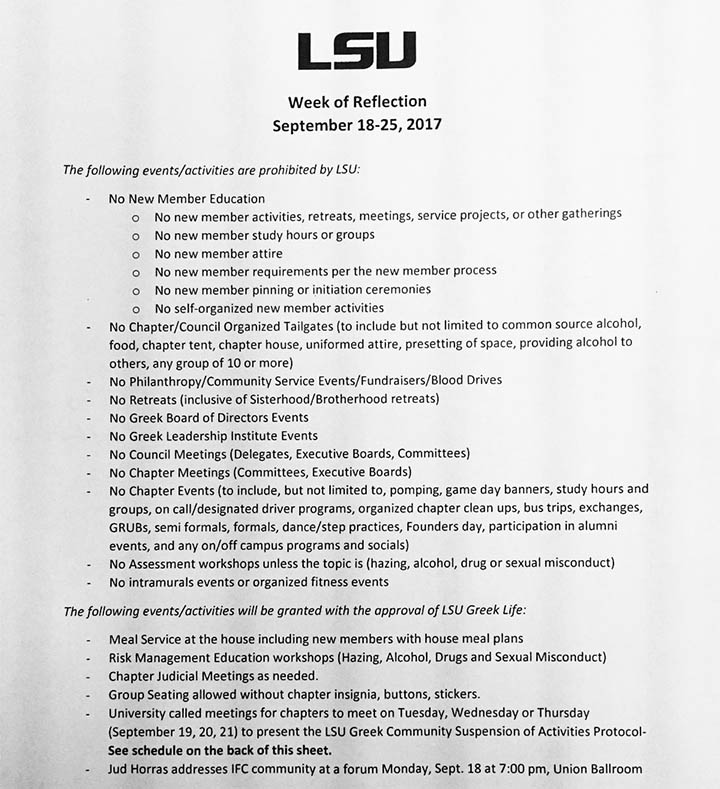 Are the other student organizations that encourage drinking (which would be all of them) under the same restrictions? Probably not. Why can’t Greeks wear stickers identifying their friends again? Nobody knows.

This school’s inability to manage a crisis is concerning. Last year the school specifically targeted student organizations (like Greeks) in an attempt to curb student tailgating. The rules were so broad they were virtually unenforceable. The legal community was buzzing with competition about who’d be the first to the courthouse filing First Amendment lawsuits. But we never got the chance: President F. King Alexander claimed he had never seen the regulations before they were released to the public, and quickly walked them back.

That was just one of a long line of tests the Old War Skule fails—but we keep letting them retake the class. The School has shown it is tone-deaf when it comes to killing off beloved institutions, or releasing ridiculous PR Photos of lazy river not long after claiming they needed to file bankruptcy. Yes, I understand how the budget works. No, I still don’t think it’s good PR.

Interested in more news from Louisiana? We've got you covered! See More Louisiana News
Previous Article BATISTE: Now, They’re Trying To Kill The Victory Arch In The 9th Ward
Next Article The Idiot Caucus Has Now Declared War On Cotton