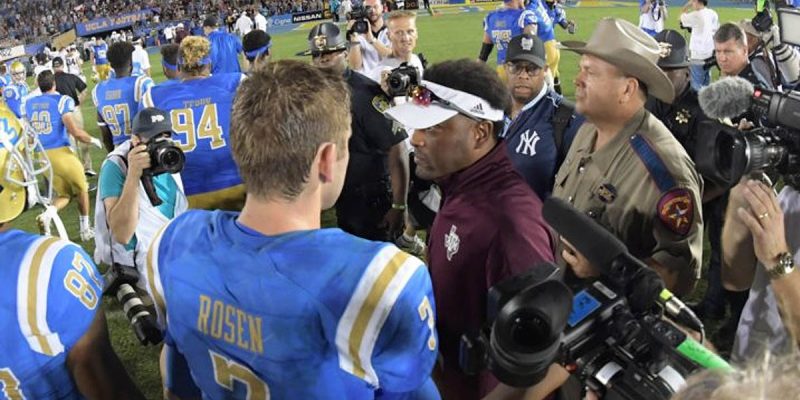 …we have something to show you. From just after the touchdown the Aggies scored to take a 37-10 lead over the Bruins, a lead Texas A&M would run up to 44-10 before an utter and complete collapse that led to a 45-44 defeat in Pasadena on Saturday, there is this…

Music to our ears. • 😎🎧 • Strike up the band, the Aggies keep scoring. #itsaboutus #aggiefblife

Essentially, this Pimp Cane is the Aggie band drum major’s baton, which has been around for more than a century.

All of which is fine and well and good, but it’s more than a little unsportsmanlike to carry on that way on the sideline of a game which is still in the second quarter. That kind of celebration is a lot more defensible after the game is over – while it’s still going on?

We could call it low-class, but that’s not really the issue. Lots of things in pro and college sports are low-class these days, at least by the standards of 30 or 40 years ago. That’s a reflection of society as a whole, and to scream too loudly about it now, while it wouldn’t make you wrong, only comes off as the old man yelling at the kids to get off his lawn.

The issue is that there’s a price for antics like that, and there’s a reason why those standards were built up in the first place. Which is you don’t go overboard celebrating when the job isn’t done. That indicates a severe shortage of discipline and focus, and to have so many members of Texas A&M’s coaching staff egging on Williams’ stupid post-touchdown strut on the sidelines shows that it’s an institutional problem within the program Kevin Sumlin has established there. Which is one reason why all the talent Sumlin has amassed at Texas A&M has produced a succession of 8-5 seasons and a greatly disappointed fan base.

Another way to put this is pimp-struts on the sidelines during the second quarter of a road game is a sure-fire way of angering the football gods.

And the football gods were certainly angry at Texas A&M.

The loss itself wasn’t the only bad break visited on the Aggies Saturday. They also lost their starting quarterback Nick Starkel to a leg injury, and he’s out for the year. The wrath of the football gods is a fearsome thing to witness.

So is the wrath of the Texas A&M Board of Regents, or at least one of its members – attorney Tony Buzbee, who lit off like a nuclear warhead following the collapse…

Buzbee has been hammered in some quarters for undermining the A&M program with 11 regular season games to go, and that’s a valid reaction to his critique. But it doesn’t come in a vacuum – Texas A&M has been a program lacking stability and discipline for some time, and there are many who see those deficiencies as emanating from Sumlin himself. Blowing a 34-point lead in about 20 minutes of play is not normal, and for a program with the kind of resources and expectations as Texas A&M had it’s also quite a bit less than what they’re paying for.

There are likely more Buzbees on that Board of Regents, and at this point Sumlin’s status as Texas A&M’s head football coach could well be undergoing a change before the end of the season. Buzbee was just the first out of the gate to make public the lack of confidence.

If Sumlin wants to pull his chestnuts out of the fire, he’s going to want to make sure his defense can give up less than 44 points this Saturday against Nicholls State and the next Saturday against UL-Lafayette. It goes without saying that losing either of those games will signal the end of his tenure in College Station. He might not want to drop the Arkansas game in Arlington on September 23 or the South Carolina game at Kyle Field on September 30, either.

But before all that, Sumlin is going to want to make sure the drum major’s baton stays off his sideline until the game is over. If a 35-point collapse doesn’t provide enough of a lesson for that, one wonders what else the football gods can unload on him next.