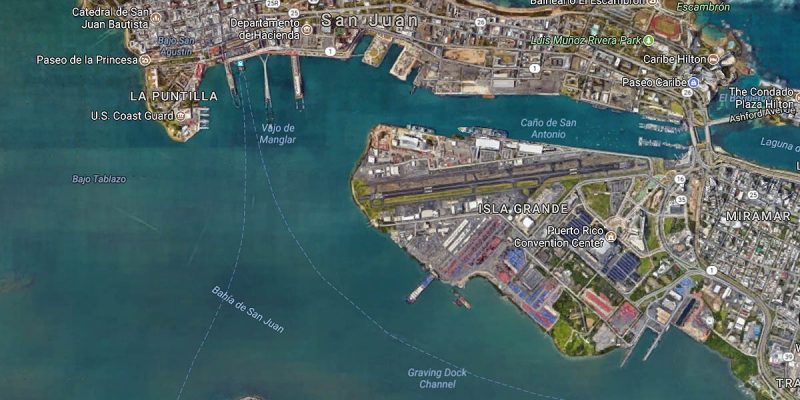 One of the biggest themes in today’s discussions in the blogosphere and among people talking about politics on social media is the recovery in Puerto Rico following what Hurricane Maria did to that island last week.

And for some reason, the flashpoint of the discussion seems to be a 1920 statute called the Jones Act, which among other things prohibits foreign-flagged ships from visiting multiple American ports in the same voyage. Those ships may load or offload cargo at one port of entry, but that’s it.

The theory being that Puerto Rico needs a mountain of aid, and being an island that aid has to be delivered largely by ship, and so it’s important to waive the Jones Act so foreign ships can bring aid from the U.S. mainland to Puerto Rico faster.

This is of a piece with the other Maria recovery narrative; namely, that this is Donald Trump’s Katrina and he’s not helping the island recover because they’re all Hispanics. That was predictable, and that Hillary Clinton tried to lead that charge (only to be smacked down by Benghazi Massacre hero and survivor Kris Paronto in a most exuberant and entertaining way) was instructive.

Back to the Jones Act – earlier today, Trump signed an order waiving it for Puerto Rico after a couple of days of what looked like waffling.

But the Puerto Rico narratives don’t exactly hold up under much scrutiny. Baton Rouge congressman Garret Graves, who’s starting to become an expert of sorts on disaster recovery, popped off about the Jones Act and what sort of effect its waiver will have on the recovery. Let’s say he wasn’t impressed after seeing the facts of what’s going on in Puerto Rico. From Graves’ Facebook…

As was made clear at this morning’s hearing, this is a solution in search of a problem. There are several thousand shipping containers sitting at the docks in PR today. The problem isn’t the Jones Act. The problem is that there was a hurricane. Logistical systems are destroyed. Trucks, highways and other transportation systems are gone. They can’t get food and supplies to hurrucane victims. Already, two-thirds of the commerce arriving in Puerto Rico arrives on foreign vessels.

Anyone that thinks this waiver just solved the problem is confused. I’d argue that it just did more harm than good. We have a huge shipping industry on the Gulf Coast that needs the jobs and economic activity now to help economies recover from their disasters. You just took American jobs and sent them overseas.

The governor of PR needs to focus on real recovery for the island and stop asking for unicorns.

Graves caught some backlash for those comments, so he later returned to provide more detail and context…

UPDATE: just getting a chance to see comments here and it is pretty clear that I did an awful job communicating. Going to try again:

2) Today, the Dept of Homeland Security waived the Jones Act (allows for foreign vessels to travel to two or more points in the U.S.). The reason they did this is because there was a belief that cargo could not get TO the island.

3) At a hearing this morning, it became very clear that getting cargo to Puerto Rico’s port facilities was not the problem. Rather, the issue is actually distributing the food/water/supplies FROM Puerto Rico’s port to the disaster victims. The trucks, roads, bridges and other transportation systems on the island are damaged.

4) The point was that the federal government had better not sit back and do nothing now that the Jones Act has been waived because this will not solve the problem of getting relief supplies to those in need.

5) FEMA, DHS, our military and others need to use aircraft to get supplies to disaster victims. We also need to be working to restore infrastructure like roads and bridges as quickly as possible.

San Juan’s port facilities are not the most comprehensive, and the amount of cargo the port can handle on a regular day wouldn’t even place it among the top 50 ports in the country (San Juan ranks No. 51, just behind the port of Port Lavaca, Texas, with 10.4 million short tons of cargo handled in 2013). And the real problem is intermodal transportation; getting cargo off the docks and moving to other places in Puerto Rico involves having to move through the city of San Juan on some fairly skinny roads – a lot of which are blocked and hampered by storm damage.

What’s more, the hurricane knocked out the island’s supply of trucks and they don’t have enough drivers. Not to mention they’re running short of diesel fuel as well.

So the real issue is getting cargo off the docks. The Jones Act is essentially irrelevant to that.

Commenters to Graves’ Facebook, most of which are full of emotionalist ranting, did make a couple of worthwhile points – first being that the Jones Act has had a deleterious effect on Puerto Rico’s economy, largely because imports from Latin America, Europe and Asia (the third variety coming as it would through the Panama Canal) would otherwise be able to stop in San Juan to drop off on their way to ports on the U.S. mainland at Miami, Houston, New York, New Orleans, Philadelphia or Boston – or other places – and make goods cheaper there. Right now, ships carrying that cargo would stop in Miami and offload, and then other ships would carry some of it to San Juan. This hinders Puerto Rico’s ability to serve as a cargo hub for the Caribbean, which it otherwise might be rather than other ports in the region such as Kingston, Jamaica or Freeport in the Bahamas, both of which are busier than San Juan and probably shouldn’t be.

That’s an argument for Puerto Rico’s long-term economic recovery and probably a good one. It’s doubtful it would make much of a difference this week.

The second point involves airdropping of supplies to people, since there are private companies now attempting to do so. And while some of that might work, an airdrop is no panacea – you can’t fit a whole lot of stuff into an airplane, unless it’s a big military cargo plane, and parachuting supplies in is not exactly a precision activity, so there’s a decent chance of having complete chaos on the ground with all manner of supplies crashing onto roadways, roofs, rivers, parking lots and who knows where, with lots of it becoming inaccessible, wasted or in the way. And airlifting supplies into Puerto Rico could be somewhat helpful, but how are you going to distribute cargo from the airport? You have the same problem that you have at the seaport in San Juan.

The answer is more trucks and more drivers, and getting a bunch of washed-out bridges fixed so the road network can be usable again. The fact that power is out all over the island and the state-owned power company there is a Third World horror show further complicates things.

Which is not to say the Jones Act going away is a bad idea for Puerto Rico. It might well be helpful going forward. But despite the howling he took on his Facebook Graves is right – nobody in Mayaguez or Arecibo is going to get a meal this week they wouldn’t have otherwise because of the Jones Act waiver.

UPDATE: As to the first narrative, that this is Trump’s Katrina, well – there is this… 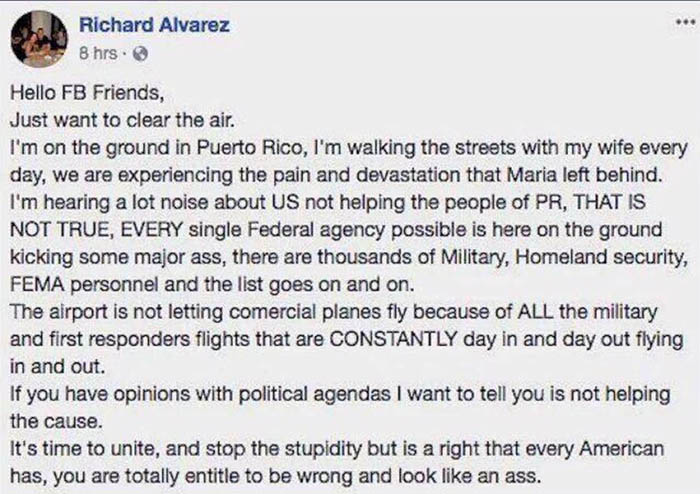 Interested in more national news? We've got you covered! See More National News
Previous Article VIDEO: The Mind-Blowing Stupidity Of The American College Campus In Just Nine Minutes
Next Article The Fifth Circuit Might Well Be Getting Better If Trump’s Appointments Are Confirmed