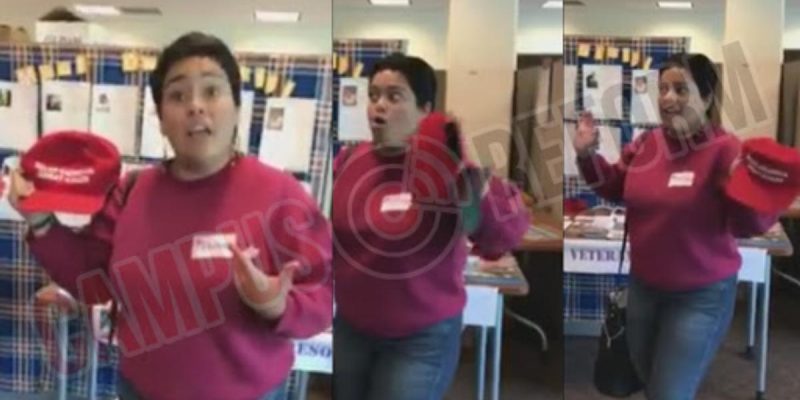 What you’re about to see comes from the University of California at Riverside, and if you can make it through all nine minutes it’s pretty self-explanatory. The quick explanation is that one student was wearing a Make America Great Again hat on campus, and a pissed-off leftist snowflake got “triggered” and swiped it off his head.

And rather than tackle the thief and extract the purloined item from her clutches, the victim, whose name is Matthew Vitale, followed her around and extracted a confession as she led him into some sort of campus crisis resolution center at the Student Life Department – whose employees would really, really rather not be subjected to this spectacle.

What’s interesting, or perhaps better described as instructive, is the litany of stupidities she utters to everyone who will listen as the victim patiently repeats his request to have his property returned to him.

The thief’s name, it turns out, is Edith Macias, and in case you’re not convinced of her low intelligence quotient based on Vitale’s video she posted her own clip – of her stealing his hat. So now we know there’s not even a shred of doubt that she’s guilty of a crime…

OK, it’s Ethnic Studies. So you got that right, or close to it.

The elements involved in this depressingly stupid clownshow are, even more depressingly, very common among the campus leftist crowd. There is the lawlessness (literally, “F**k your laws!” as Macias exclaims in the video), the entitlement of being able to violate others’ rights with impunity just because one feels like it, the anti-white racism, the anti-Americanism and the “crybullying” – note that Macias, upon stealing Vitale’s hat, went straight to the campus authorities to complain about his wearing it as though if she complained loudly enough she’d get satisfaction even though by any standard she’s in the wrong and ought to run away and hide.

There is the other bit – which is that Vitale probably should have put his phone down, tackled Macias and extracted his hat from her grasp and then exited the scene. People like her don’t even have the basics of civilization down pat – as in, at the very bottom we learn as children that if we engage in behavior of enough of an unruly and violative character, someone will come along and make us feel physical pain in consequence. The guess is nobody’s ever done that to Macias, or else she might understand more about the potential negative consequences of her actions.

Now that we know about her she’s probably going to become internet famous – just like she wanted to be. The fact her Facebook feed is now jam-packed with comments featuring Pepe The Frog only helps her brand herself as a victim.

UPDATE: We also found a GoFundMe in which Edith Macias is begging for $200 to put a deposit down on an apartment. Here was the elevator pitch for that…

I attend the University of California, Riverside. I found a place to stay next school year but need help getting enough money to put a down payment on it. I have one week to raise $200 but my mom can’t help and the rest of my family won’t help. My moms rent just went up $100 which makes it harder for her to help me. I had a job when summer started in riverside… But was forced to move to LA with my mom because I was evicted of my home by a racist white bitch. In LA finding a job has been hard for me. I’m going to be looking for other ways to make enough money to pay the down payment… But I thought id take a shot. Thanks you.

Shockingly, in the six weeks that GoFundMe has been up it’s raised exactly zero dollars and zero cents, which we’ll take as a bit of evidence that leftists are incompetent in the persuasive arts.